‘I always wanted to communicate’ 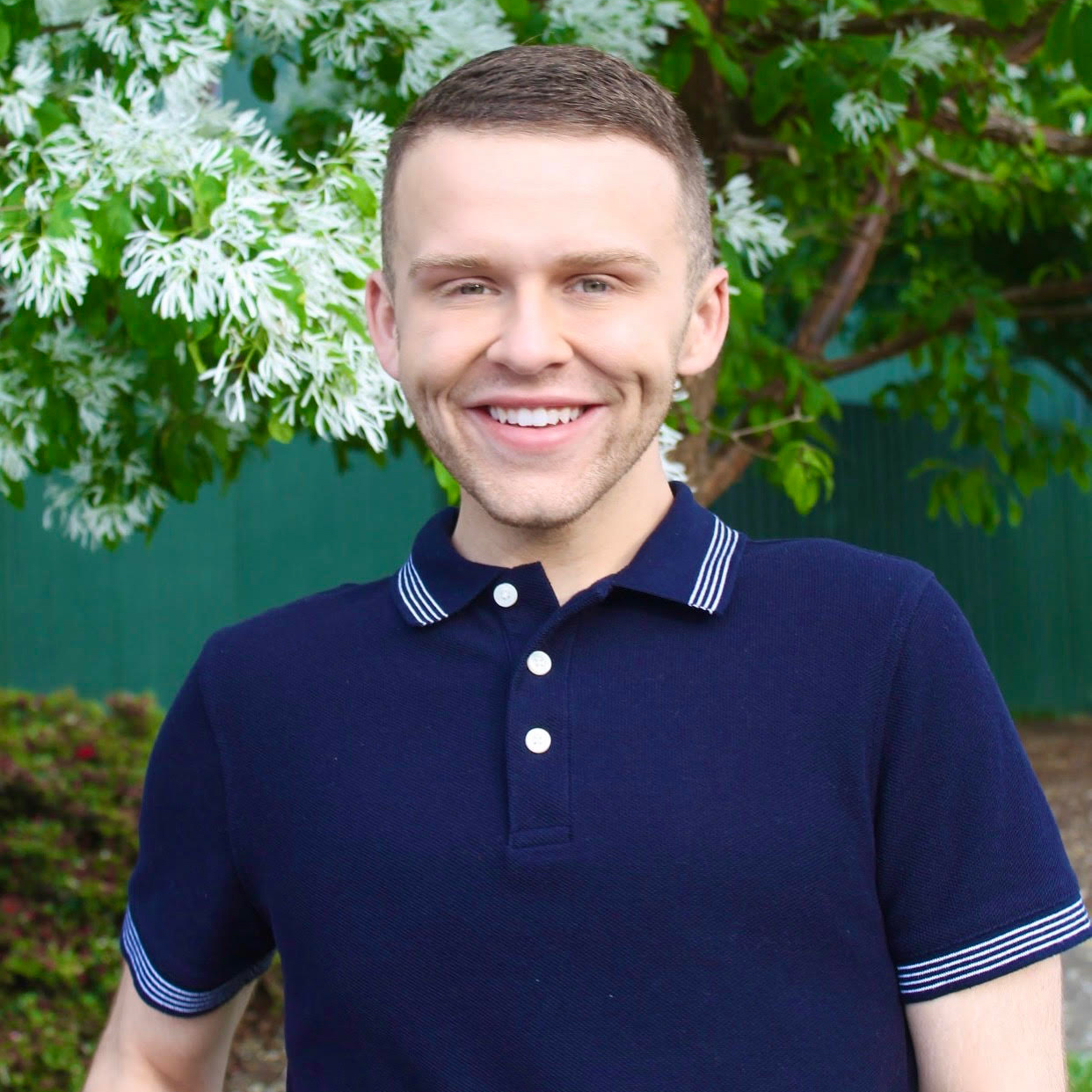 OSU CONNECTION: From 2019 to 2021, Rogers was a graduate student in OSU’s Speech Communication program, where he earned a master’s degree in interdisciplinary studies, rhetorical and relational communication.

FREE TIME: Rogers said he and Edwards are “avid about trying a new restaurant every week, so we just kind of randomly try somewhere new every week. Also, traveling and getting outside of the city. When we were in Oregon, every weekend we went somewhere new. … We were always about exploring the beautiful country.”

FUN FACT: In 2017, Rogers won big on an episode of “The Price is Right.” He won a car, which he sold the next day. He advanced to the “Showcase” section at the end of the show, where he also won an outdoor package that included outdoor furniture and a sound system. He ended up not taking the outdoor package, with the exception of the sound system, which he still has. He showed his public speaking students a video clip of his “Price is Right” victory at the start of each term: “I would show them – so this is what happened when I was public speaking on TV – showing them the importance of public speaking.”

How is it that Garrett Rogers – a native of a small town in Oklahoma – made his way to Oregon State University for graduate work in speech communication?

Blame it on Laura Jo.

In a series of videos intended in part to satirize multilevel marketing schemes, Rogers dons a resplendent wig and questionable fashion choices to play Laura Jo, an irrepressibly bubbly saleswoman.  In one of the videos, Laura Jo sells clothes by “Lu Lu Poo,” in another, jewelry by “Tatahzazi.” In another video, Laura Jo pulls out a whiteboard to offer indisputable proof to her viewers that the company whose wares she’s pitching is absolutely not a pyramid scheme. Case closed.

Rogers started doing the videos “really just on a whim,” intending to poke gentle fun at a type of sales video that’s relatively common in the South.

Then it got weird.

The first video, made on his birthday, went viral, collected more than 250,000 views and thousands of followers. “So I decided to capitalize on that, making more. I had a lot of content ideas anyway,” he joked.

The videos became so popular that Rogers decided to pull the curtain back on Laura Jo and appeared in a Facebook Live video as himself, answering questions from followers. At one point, a follower asked Rogers – at the time, a recent college graduate working as a bartender – about his future plans.

“I was mentioning that I wanted to go to grad school and that I was hoping it would be somewhere in Oregon,” Rogers said, thanks to fondly remembered trips to the state.

Now it gets really weird: Among the people watching that Facebook Live video was Michelle Huillet, an instructor in OSU’s Speech Communication program, part of the College of Liberal Arts’ School of Arts and Communication.

“I just came across one of these videos randomly and thought it was hilarious,” Huillet recalled. One night, she tuned into Rogers’ Facebook Live session and heard him mention his desires for graduate school and Oregon. She contacted him. He answered.

And that’s how, in 2019, Rogers arrived on the campus at Oregon State University as a graduate student teaching public speaking and working on a master’s thesis about how viewers reacted to the Laura Jo videos. It’s worked out well for everybody: Rogers now is in Chicago, working as a communications executive at Yelp. Huillet and others in OSU’s Speech Communication program predict a bright future for the 26-year-old Rogers -- and they say he’s an excellent example of the type of high-quality student the program is attracting.

Alas, the future might not be as bright for Laura Jo: Rogers says he’s unlikely to resurrect the character. We’ll get back to her.

“I always wanted to communicate”

The original plan, fueled by his days as the editor of his high school newspaper, was to work as a TV reporter.

That plan lasted until he got a better sense of the low pay and ridiculous hours that reporters work at small-market TV stations. That’s when a faculty member at the University of Arkansas-Fort Smith, where Rogers was attending, suggested public relations as an alternative.

After graduating from Arkansas-Fort Smith with a degree in media communication and political science, Rogers was working as a bartender as he pondered his future options. He made the first Laura Jo video on his birthday, Oct. 11, in 2019. The Facebook Live appearance followed. Then Oregon State, in the form of Michelle Huillet, came calling.

“He seemed like a really good communicator, easy to talk to and very clear,” Huillet recalled of her first impressions of Rogers. “He told me he loved communication and he had such a passion for it. … It seemed like it was a good fit (for OSU) and that he would really thrive here.”

The more he looked at OSU, the more Rogers liked what he saw from the Speech Communication program – and it tied into a long-held desire to live in Oregon. “I had visited Oregon twice in my life and from the moment I visited, I just had this fascination with the state. I fell in love. It was beautiful.”

An early encounter with his adviser at OSU, Professor Trischa Goodnow, ended up paving the way for Rogers’ master’s thesis.

“I knew I wanted to write about social media in some way because it had literally changed my life in a matter of three months,” Rogers said. “I was having brand deals from local businesses wanting to partner with me. I was having people send me free products.”

One night with Goodnow, the director of graduate studies in the Speech Communication Department, helped focus Rogers’ plans. She had taken the new crop of graduate teaching assistants, including Rogers, out to dinner. “That was when I found out he was a social media influencer,” Goodnow said – and, to prove the point, Rogers pulled out his cellphone and showed Goodnow a clip from one of the Laura Jo videos.

Yes, he could – but it turns out that drawing on your own experience for a thesis can involve just as much, if not more, rigorous research and analysis than a traditional thesis. In fact, Goodnow thinks it might be more difficult in some ways: “I’ve directed a couple of theses that have been based on the students’ actual experiences, and in some ways it’s a lot harder, because you have to look at yourself objectively and what you’ve done and lay yourself bare. … In this particular case, he was having to figure out what he was doing, so it meant really looking and watching himself over and over again to figure out what it is that he was doing that his fans were glomming onto.”

In the end, Rogers said, his thesis focused on what he called “parasocial relationships” – one-sided relationships – on social media. “A lot of my followers, they feel as if they really know me (but) I don’t know anything about them,” he said. … “It was a little weird.”

In addition to pounding out his thesis, his graduate work at Oregon State involved teaching duties: He oversaw the “recitation” portions of public speaking classes, in which students prepare and deliver speeches. Rogers loved the work – and got glowing reviews from his students. “When you’re able to just literally see their confidence grow from the first speech to the last speech they give … it’s such a rewarding role and I love that.”

Huillet said Rogers had a natural rapport with his students – and that his conversations with students sometimes went beyond public speaking, especially when the pandemic forced OSU instructors to pivot to online learning. “I think he’s someone who’s really there for his students,” she said. “He’s not a pure recitation instructor; you could talk to him about something personal, if you just needed someone to talk to.”

That reflects the relationship between Rogers and his advisor, Goodnow. She recalls weekly calls with Rogers that became almost a running joke between the two of them: “He was going to drop out of school, he was always in major crises. He actually texted me last week and said, “Can I have another crisis talk with you?’”

Goodnow doesn’t mind: “I loved working with Garrett. … I miss having him around.”

And Rogers has fond memories of his time at Oregon State: “The whole communication department, I can honestly say, felt like a family in some ways. … My adviser, she went to the ends of every rope for me and with every member of my committee as well. I just felt truly supported by every single faculty member in that department.”

Rogers is working now as a communication officer with Yelp, which publishes crowd-sourced reviews about businesses. His master’s degree, in interdisciplinary studies along with rhetorical and relational communication, comes in handy as he works with Yelp advertisers, “making sure they’re getting the most for their money and just basically trying to keep all those account holders very happy.” In fact, he said, a communication degree opens doors to all sorts of jobs: “I think it truly sets you up to master any other endeavor you might go after.”

But he ponders a return to academia at some point, pursuing a doctorate, launching a career of teaching and research.

Goodnow, for one, thinks he’d be an outstanding doctoral student. “I think the sky’s the limit for Garrett,” she said.

But wherever Rogers goes next, Laura Jo probably won’t be along for the ride.

“I am always being asked to revisit Laura Jo, especially by my online followers,” he said.  “However, after writing my thesis and really learning so much about social media, I find it not as enjoyable. It’s kind of like once you pull back the curtain, you’re like, ‘wow, social media has so many negative aspects and I certainly was addicted to it for a few years.’ … Do I see myself diving into more Laura Jo again? No. I’m on to newer things now. However, I certainly thank ‘her’ for all of the doors she opened for me.”