Constant curiosity for its own sake and a strong sense of individuality: these two traits are what led Rebecca Ramsey to Oregon State University.

Even in terms of gap years, Rebecca is a contrarian. A violinist by profession and a senior at Oregon State University, her higher education began at Long Beach State in 1974. This was soon after high school, around the same time as most who follow the standard timeline for higher education.

However, that came under threat when at 20 she stumbled upon a job opportunity while in Las Vegas with a friend.

“It turned out the timing was perfect.” Ramsey said. “All the people who were working at that time were very much older people–in their sixties, a few maybe in their fifties­–but they were holdovers from the New York Scene. So, they were kind of thinking, ‘I think we need some younger people around to liven things up a bit.’”

With a little serendipity, Ramsey fell into a full-time job playing violin in the Caesar’s Palace orchestra with a bunch of old timers, performing with acts like Harry Belafonte, Frank Sinatra, Tom Jones, Andy Williams–names that she had been watching on TV when she was growing up in the Los Angeles metro.

Rebecca had been playing violin since she was ten years­ old when she found herself in Las Vegas. She couldn’t see a good enough reason why she should decline and go back to Long Beach, where she had no car and was basically living on food stamps. For her, putting college on hold was suddenly a practical and exciting decision.

So, she took that opportunity, and it changed the trajectory of her life for good. But despite “dropping out” of school she never considered herself “finished” with higher education. 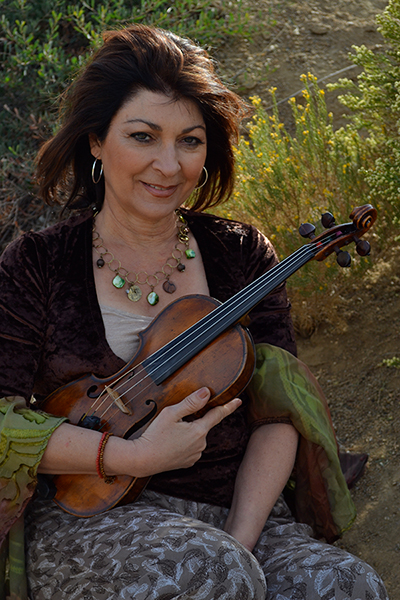 “I’m a lifetime learner.” Ramsey, now in her late 60’s, said of herself. Not long after beginning her work in Las Vegas back in ‘74, she enrolled at University of Nevada Las Vegas and took classes part-time in music and violin composition–but pursuing costly training never made sense when she was learning so much as a now professional violinist.

She’s been kept busy since then building an impressive C/V as a performing violinist, teaching music to students and producing work that spans territories you’d typically not find together in the same sentence.

A constant passion for mindfulness and meditation led Ramsey to stints at UCLA online and other universities over the years to expand on her interest in these areas while continuing to pursue her career and work on her craft.

But 40 years later, she’s still working on her bachelor’s degree.

The gaps in her undergraduate timeline have been less a matter of uncertainty than a course of pragmatism. Although not a formal degree holder in either music or mindfulness–a household term nowadays, but an uncommon field of study in her day–Ramsey tapped into her entrepreneurial spirit and started her own practice called Violin Sound Sanctuary, combining deep violin sound with her training and experience in mindfulness and meditation.

As it so happens, a former student of Ramsey’s who began taking lessons with her at the age of 14, is also exploring the intersection of sound and spirituality.

Kaila Potts shared the stage with Rebecca on Celine Dion’s Las Vegas orchestra and have maintained a connection, Potts says, in three different serendipitous stages: first as a student and teacher, next as performers, and now as colleagues in the business of sound and healing.

“It’s so inspiring,” said Potts. “I remember when she said she was going to go back to school and take on this new opportunity, I was so inspired by her fortitude, because how many people go back to school when they’ve already had a lot of life experience, and just learn new things and embrace new growth? I don’t know if I could do it.”

A bachelor’s degree might be one of the only boxes Rebecca has yet to check. It wasn’t until the unexpected onset of the pandemic, when an influx of free time suddenly appeared for her, that she found the liberal studies program at OSU’s Ecampus. The program allowed her to create her own individual plan of study catered to her experience and interests.

“I was excited to have a student like Rebecca in my Arts Entrepreneurship class,” said Dr. Dana Reason, a composer and assistant professor at OSU’s music program. “I was excited to learn more about her work. I had to keep asking questions, which I think is my job, to find out more about her and what I could possibly help with, just beyond the course content, but what might inspire her or give her courage to pursue her next steps as a musician, and now composer.”

Like most creative individuals, Rebecca’s curiosity has been the hallmark of her career. It was this unceasing characteristic that led her to OSU. It’s what led to her most current endeavor, contributing to the score of a film in collaboration with her professor, Dr. Reason.

“When you’re born with certain creative drive, that never leaves you,” said Ramsey. “I had to go through a long period of my life where I was earning a living. And I was studying on my own during all that time. I didn’t come from privilege, I had to make it all on my own. But when I had gotten finally to the point where I had financial security, the very first thing I wanted to do was be a student again. That part of myself never died.”

This spring, Rebecca Ramsey will be a degree holder from OSU in Music and the Contemplative Arts, a program that she designed for herself, a program that allowed her creativity to keep on growing.