“We’ll fight for dear old OSU, for an OSU man am I” – Meistersingers Medley

In 1898, Oregon State’s first band director, Captain Harold Beard, arranged an ode to the then-named Oregon Agricultural College. When the university’s name changed, so did some of the words, but the traditional tune was preserved, and Beard’s legacy lived on in the choral form of the Meistersingers Medley. Now, Dr. Steven Zielke, director of choirs and Patricia Valian Reser endowed professor of music, is altering the words again to create a more gender-inclusive message within the anthem. The adaptation comes as part of a personal commitment from Zielke – printed as a “Statement on Diversity, Equity, Inclusion, Access, and Belonging” in recent choir programs – to hold himself, his colleagues, and the community of OSU’s choirs to a standard that acknowledges, welcomes and celebrates traditionally underrepresented communities within choral music.

So what exactly does this mean? Zielke says he strives to “eliminate historical biases and discrimination in our choirs in a contemporary way, meaning how we talk about music and how we use gendered language in our rehearsals, things like that.” In addition, Zielke looks for gender balance in hiring clinicians and in guest artists and conductors, as well as “highlight[ing] music by composers that may have been historically ignored.” 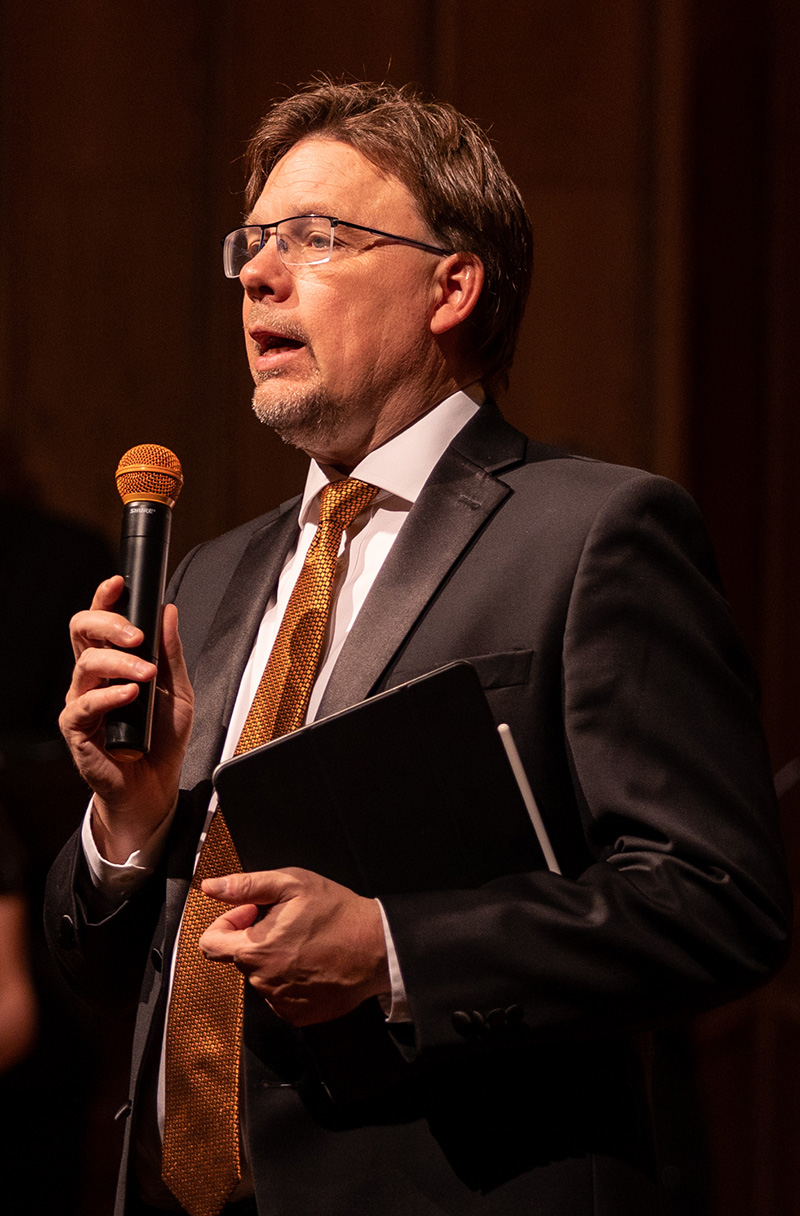 For example, Zielke is working with the OSU Meistersingers on a piece called “Sea Fever” by Amy Beach, an American composer active in the early 20th century. Also, Dr. Sandra Babb, the director of the Bella Voce treble choir at OSU, points out that when her choir was performing in the 2021 ACDA National Conference, the program featured all women composers, one being a woman of color.

Though Zielke and Babb stress the importance of addressing historical imbalances such as the traditional ignoring of women composers, they are also working on ways in which to create a more inclusive atmosphere going forward. This includes eliminating gendered language in their choirs’ rehearsals. Instead of addressing parts of their choirs with binary terms like “boys” and “girls,” Zielke and Babb use section names like “tenors” and “altos.” The choir directors also teach future directors to do the same. “I have an entire crop of student teachers out there that will say, ‘sopranos, let’s go over this,’” Babb says.

“There are a lot of folks who identify as gay or lesbian in our choirs,” Zielke adds. “When we sing love songs, the songs are pretty obviously talking about a heteronormative love. Often words are masculine or feminine.” This observation has led Zielke to start changing gendered terms to more inclusive ones in all of the traditional OSU choir pieces. Zielke also aims to officially change the name “Men’s Choir” on the college’s official scheduler and directory to the “OSU Meistersingers,” as already listed on the choral and vocal music website and in printed programs.

Zielke and Babb have also reformed the traditional dress code for their choirs. For the OSU Chamber Choir, men usually wore tuxedos and women wore dresses. Now, “anyone can wear a dress, anyone can wear a tuxedo,” Zielke explains. Babb comments that her students in Bella Voce just have to wear black.

Though Zielke admits that he has been inconsistent with using gender-neutral terms, he is encouraged by how patient his students are with him. “I have a trans female in the second bass section, and she’s super non-judgemental,” Zielke says. “I’ve told her ‘I’m going to change this. Give me time.’”

During her first year at OSU and in the Meistersingers, Iris Farley has felt welcomed in the choir community. “There’s not a single person in choir that I can think of who has outright objected to me being trans,” Farley states. Farley does acknowledge that “a lot of choir students still see [the Meistersingers] as a men’s choir,” since the Meistersingers is a choir composed of tenors and basses, and “males generally have lower voices.” Though, “I try to correct them on it, and they’re pretty accepting of that,” Farley says.

Zielke and Babb look to extend their choirs’ inclusivity beyond gender and sexual identity, too. As they recognize that their choirs tend to be very white-dominant, the directors say they sympathize with persons of color “that might see our choirs and don’t join because it looks like a place they might not be welcome.” In the end, Babb says their mission is to create a safe, affirming classroom.

“It is a very easy thing to identify contemporary kinds of discimination and unwelcomeness in choral music and historical ignoring of populations in choral music,” Zielke states.

Through the history of the choral art form – being centuries older than the band director Captain Harold Beard’s ode to OAC, and older than band as an artform itself – we can trace a long tradition of gender and racial discrimination, with an overtone of heteronormativity. Zielke and Babb are hoping to change the way this art form, rooted in tradition, is taught and perceived.

“It’s a shift, but it’s a change that [teachers] are making … It’s going to be slow, we probably won't see real consistency for about 20 years,” Babb predicts.

Zielke sums up the issue well in stating: “The transition is not the changes we have to make, it’s the changes of our minds. And then the solutions will present themselves.”