About Long-term Ecological Reflections: Since its inception in 2003, Long-Term Ecological Reflections has hosted more than forty writers-in-residence at Andrews Forest and sponsored field symposia on challenging topics such as “The Meaning of Watershed Health” and “New Metaphors for Restoration.”Writings produced by our writers-in-residence have appeared in prominent national publications such as The Atlantic, Orion and OnEarth. With funding from the PNW Research Station and programmatic leadership of the Spring Creek Project, Reflections has garnered attention from the leadership of the National Science Foundation, been the focus of an article in Frontiers in Ecology and the Environment, and helped inspire more than twenty other sites around the country to initiate Reflections-type programs. 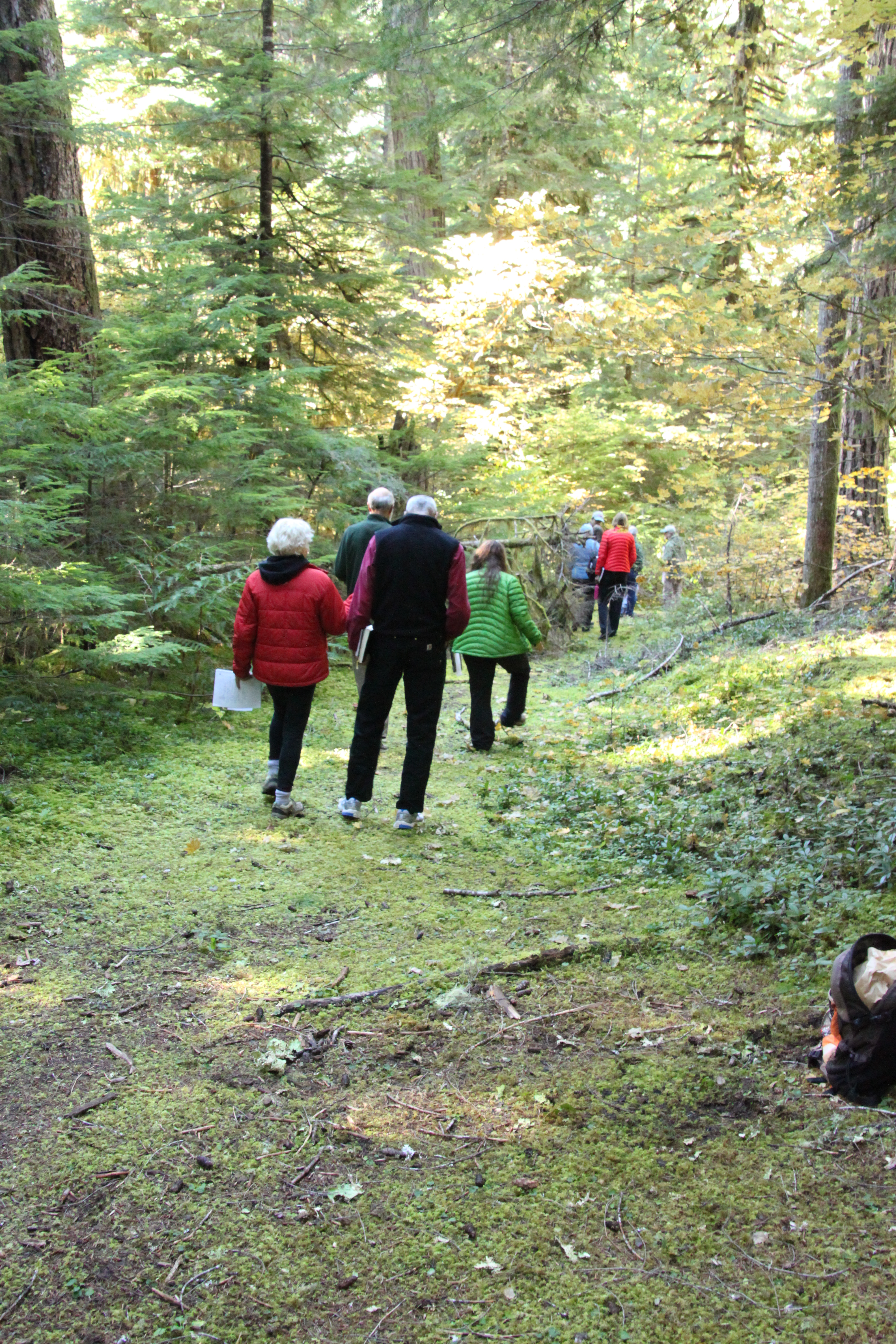 Workshop: Long-Term Ecological Reflections Ten-Year Visioning
October 2014
A special gathering at Andrews Forest reviewed accomplishments from the first ten years of the Long-Term Ecological Reflections program. The workshop surveyed themes from the writers-in-residence’s works and our field symposia, and envisioned future strategies for the Reflections program over the next decade. The workshop concluded with a public event at OSU featuring readings by Alison Deming and Robin Kimmerer.

Gary Snyder
October 26, 2012
Gary Snyder’s work has influenced many of the most dramatic literary and cultural movements of the past fifty years. A long-time Buddhist practitioner, avid outdoorsman, and environmental thinker, Snyder has worked to articulate the relationship of humans to the whole of nature. Co-sponsored by the OSU Visiting Writers Series and the Long-Term Ecological Reflections program.

Sandra Alcosser
May 24, 2012
Sandra Alcosser read at the conclusion of her Writer-In-Residency for the Long-Term Ecological Reflections program at the H.J. Andrews Experimental Forest. Alcosser has published seven books of poetry, received two individual artist fellowships from NEA. Her poems have appeared in The New York Times, The New Yorker, The Paris Review, Poetry, and the Pushcart Prize Anthology. Co-sponsored with the OSU Visiting Writers Series.

Jane Hirshfield
April 2, 2010
Jane Hirshfield is the author of six books of poetry. Her many honors include fellowships from the Guggenheim and Rockefeller Foundations, the National Endowment for the Arts, and the Academy Fellowship for distinguished poetic achievement by The Academy of American Poets. Hirshfield read for the OSU Visiting Writers' Series at the conclusion of her writer-in-residency for the Long-Term Ecological Reflections program at the H.J. Andrews Experimental Forest.

Revitalizing Natural History
November 12, 2008
Thomas Lowe Fleischner is the author of two books, Singing Stone: A Natural History of the Escalante Canyons and Desert Wetlands, and he teaches Environmental Studies at Prescott College. Fleischner has written widely about rangeland issues, Canyonlands ecology, and the importance of natural history. He gave a seminar and lead a discussion, Revitalizing Natural History, at the conclusion of his writer-in-residency for the Long-Term Ecological Reflections program at the H.J. Andrews Experimental Forest.

New Metaphors of Restoration of Forests and Watersheds
September 20-22, 2002
As we work to restore damaged and altered landscapes and reframe our relationship with the land, what new metaphors can give meaning and direction to our efforts? During this three-day, three-stage event sixteen writers and scientists examined this question; shared ideas with a public audience in a performance that included music, readings, and lectures; and then discussed their ideas with a group of restoration practitioners. The event was co-sponsored by the Forest Service.

Destruction and renewal in geological, ecological and human dimensions in a volcanic bioregion.
July 21-24, 2005
Twenty creative writers, scientists, philosophers and others gathered together on Mount St. Helens for four days of camping, hiking, learning, and sharing insights about the meaning of cataclysms and the sources of renewal. The Foray asked the question: What can this radically altered landscape tell us about how to understand nature and how to live our lives? Read about the gathering in Terra.

Exploring the Meaning of Watershed 'Health'
October 19-21, 2006
The symposium brought together twenty distinguished creative writers, thinkers, artists, and ecologists to engage a critical question in this time of destruction and restoration: What is a healthy watershed? Are there analogies between watershed health and human health? What is illness in a watershed? The final symposium event included a larger group of people who were in a position to use these ideas for practical purposes—watershed council members, health practitioners, environmental activists, legislative leaders.

Destruction and Renewal in Geological, Ecological and Human Dimensions in a Volcanic Bioregion - II.
July 18-24, 2010
A dozen writers from around the country gathered with about 110 scientists and staff for a week of camping and field work at Mount St. Helens to consider lessons from human and ecological responses to 1980 volcanic eruption. The retreat closed with a reading of early stages of the writers’ works. See an account of the adventure at the on-line journal.

Blue River Environmental Philosophers Gathering
September 28-30, 2007
This field symposium brought environmental ethicists and philosophers from throughout the bioregion to the H.J. Andrews Forest. The goal was to think hard and collaboratively about what is our work in a 'wounded world.' To answer the questions: What does the world need from us as environmental philosophers? How can we provide it? Click here for the Salmon Nation Environmental Philosophers’ Gathering. The seed of an idea planted at this gathering grew to become the book Moral Ground: Ethical Action for a Planet in Peril (K.D. Moore and M.P. Nelson, editors, Trinity 2010).

Blue River Writers Gathering
Fall of 2006, 2008, 2010, 2012
Spring Creek inaugurated a biannual Blue River Writers Gathering for Northwest nature writers at the H.J. Andrews Experimental Forest in 2006. The weekend gathering is an opportunity for support, inspiration and restoration for 30 invited writers from Arcata to Anchorage to Fort Collins who are engaged in this loving but sometimes lonesome occupation. Nature writers have been holding regional gatherings for a number of years in New England and in the Colorado Rockies.

The Eye of the Storm: Re-imagining Ethics for a Changing Planet
September 30-October 2, 2011
This Blue River Symposium gathered some of the nation’s most creative moral thinkers—philosophers, activists, theologians, writers, poets, and scientists—to think collaboratively about the moral ‘pinch-points’ we will face and to imagine what a resilient ethic might look like. This gathering lead to the writing and publication of The Blue River Declaration: An Ethic of the Earth (pdf). (Participant List)