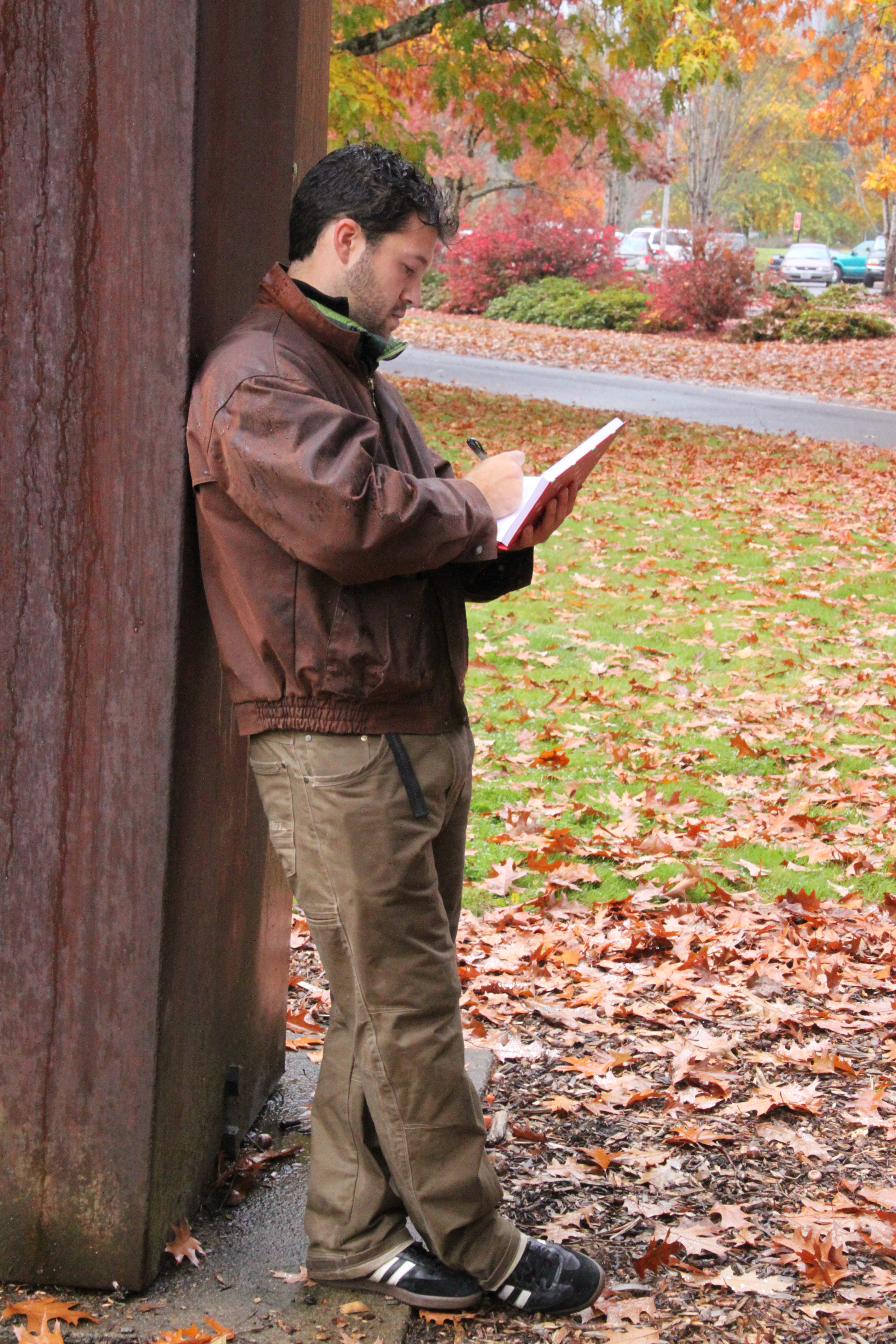 Jill Sisson, naturalist, and Cub Kahn, photographer, hosted seasonal Campus Rambles. These walking workshops for creative writers and photographers celebrated the distinctive flora, fauna, and landscapes of the Oregon State University campus. Participants met on a Sunday morning to stroll through campus and visit designated sites, with writing and photography prompts. Each Campus Ramble was followed by an evening session where participants shared their favorite images and writings. (Fall, Winter, and Spring, 2013-2014) 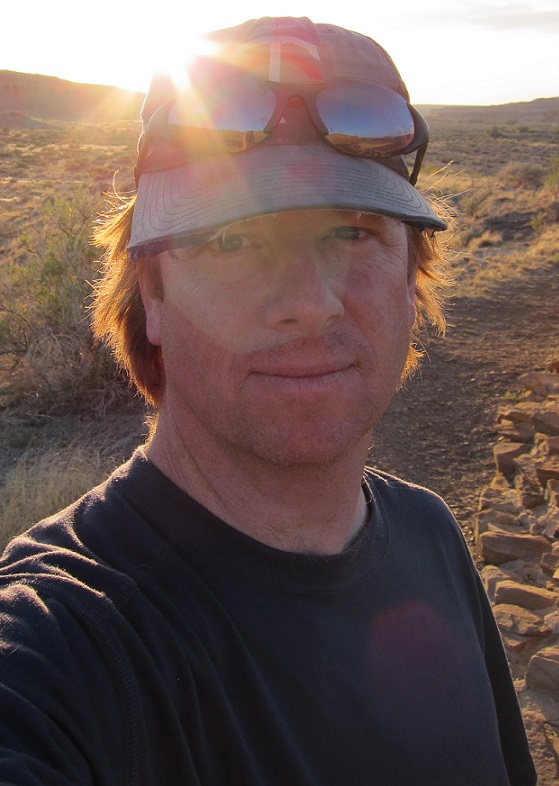 Paul Bogard, author of The End of Night: Searching for Natural Darkness in an Age of Artificial Light, shared his insights, photographs, and stories in a fascinating program at the Corvallis-Benton County Public Library. Based on his extensive travels, Bogard sought out dark spaces that best reveal the night skies, while considering our affinity for artificial light, the false sense of security it provides, and its implications. (October 9, 2013) 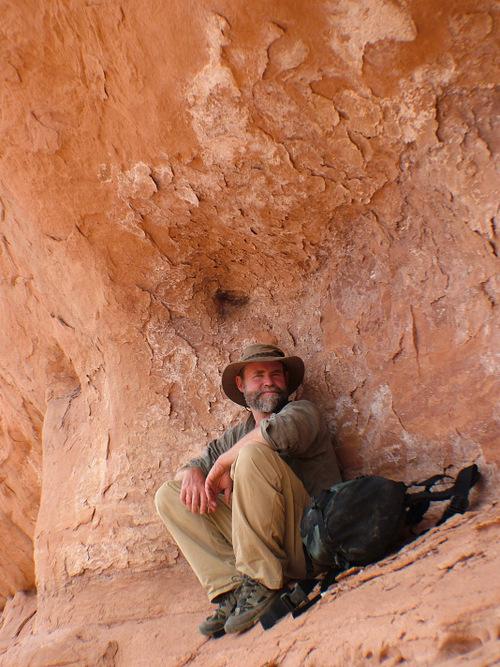 Writer and world-traveler Craig Childs shared stories and images from his work-in-progress, On the Trail of the First People: A Journey into the American Ice Age. Through spectacular images and storytelling, Childs took the audience through Paleolithic landscapes from Alaska to Chile to Florida. Craig Childs is a writer who focuses on the relationship between humans and the landscape, often told from mind-blowing journeys in the wilderness. He is a regular commentator for NPR’s Morning Edition and the author of more than a dozen critically acclaimed books, including Apocalyptic Planet and The Animal Dialogues: Uncommon Encounters in the Wild. (May 1, 2014) 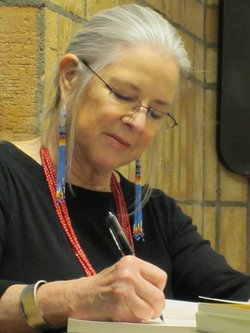 Linda Hogan, a Chickasaw novelist, essayist, and environmentalist, read from her. She is the author of Seeing Through the Sun, the essay collection Dwellings: A Spiritual History of the Living World, and the novels Mean Spirit, Solar Storms, Power, and People of the Whale: A Novel. This special event was part of the OSU Visiting Writer Series. In advance of her Corvallis visit, Hogan was writer-in-residence for the Long-Term Ecological Reflections program. (April 11, 2014)

Bret and Kim Stafford, the oldest children of the poet and pacifist William Stafford, were pals. Bret was the good son, the obedient public servant, Kim the itinerant wanderer. Growing up, there was a code of silence in the family, not to talk about the hard things. Against a backdrop of the 1960s--puritan in the summer of love, pacifist in the Vietnam era--Bret became a casualty of his interior war and took his life in 1988. In this book, through a brother's devotions, the lost saint teaches us about depression, the tender ancestry of violence, the quest for harmonious relations, and finally the trick of joy. (February 21, 2013)

Robert Michael Pyle, read from his new book, The Tangled Bank: Writings from Orion, with special guest, Orion editor, Jennifer Sahn. Co-sponsored with OSU Press and GrassRoots Books and Music. Pyle is the author of 14 books, including Chasing Monarchs, Where Bigfoot Walks, and Wintergreen, which won the John Burroughs Medal. (September 27, 2012 at Old World Deli.)

Clem Starck and John Daniel, two of Oregon's most authentic and accomplished

Ceiridwen Terrill teaches science writing and environmental journalism at Concordia University. Terrill read from and discussed her book, Part Wild: One Woman's Journey with a Creature Caught Between the Worlds of Wolves and Dogs which tell the story of her journey with a wolfdog, Inyo. Driven to understand the differences between dogs and wolves, Terrill spent five years interviewing genetics experts, wolf biologists, dog trainers, and wolf rescuers. (February 20, 2012)

Bill Porter, whose renowned translations of ancient Chinese poetry and sacred texts appear under the name Red Pine, shared stories, poems, and photographs from his extensive travels in China in search of Taoist hermits. Porter has chronicled his travels in China in several prose books, Road to Heaven and Zen Baggage. His translations have been honored with NEA translation fellowships, American Literary Translators Asian Award, and a Guggenheim Fellowship. (January 26, 2012)

Eric Paul Shaffer is author of five books of poetry, including Lahaina Noon and Portable Planet. His poetry has appeared in such journals as North American Review, Slate, and The Sun Magazine. Shaffer received the 2002 Elliot Cades Award for Literature, a 2006 Ka Palapala Po‘okela Book Award for Lahaina Noon, and the 2009 James M. Vaughan Award for Poetry. He lives on O‘ahu and teaches at Honolulu Community College. Porter and Schaffer's reading is part of the Literary Northwest Series co-sponsored by OSU Department of English MFA program and the OSU Beaver Store. (January 27, 2012)

Robin Morris Collin spoke for the Spring Creek Café: The Moral Responsibilities of Corporations. Collin teaches environmental law at Willamette University College of Law. Winner of many awards, including a David Brower Lifetime Achievement Award at the Public Interest Environmental Law Conference and the Judith Ramaley Award from the Oregon Campus Compact for civic engagement in sustainability, she currently heads the school's Certificate Program in Sustainability Law. (April 6, 2011)

Brian Turner, renowned poet and prose writer, and the 2003 Ta Mata Estate Poet Laureate of New Zealand, read from his work at the conclusion of his writer-in-residency for the Long-Term Ecological Reflections program at the H.J. Andrews Experimental Forest. Brian Turner is one of New Zealand's most significant writers on landscape, environmentalism and sports. Winner of all his country’s major awards, Turner’s writing is funny, muscular and unsentimental. (October 28, 2011)

Brian Doyle is award-winning author, essayist, and editor of the University of Portland's Portland Magazine, which is annually ranked among the ten best university magazines in America, and ranked first in 2002 among all American university magazines. Doyle’s essays have appeared in The American Scholar, The Atlantic Monthly, Orion, Commonweal, Georgia Review, and Harper’s. He read from he recent book Mink River. (December 2, 2010)

John Felstiner, from Stanford University, is the also author of the prize-winning Paul Celan: Poet, Survivor, Jew and Translating Neruda: The Way to Macchu Picchu. He read from his latest award-winning book, Can Poetry Save the Earth? A Field Guide to Nature Poems. Hear Can Poetry Save the Earth? featured on NPR's Morning Edition. (October 27, 2010)

Jack Nisbet is a teacher, naturalist, and writer who lives in Spokane, Washington. He has published six books and read from his most recent The Collector: David Douglas and the Natural History of the Northwest. The Collector tracks Douglas's fascinating history, from his humble birth in Scotland in 1799 to his botanical training under the famed William Jackson Hooker, and details his adventures in North America discovering exotic new plants for the English and European market. (May 12, 2010)

Steve Lewis, one of Alaska's foremost cavers, spoke at OSU about his experiences measuring and mapping many of the more than 500 known caves in Southeast Alaska during his talk, Alaskan Karst and Caves: Exploration and Conservation. (February 26, 2010)

Trees and Forests of America is an unprecedented collection of 200 stunning photographs. Along with sharing breath-taking images, Tim Palmer (author and photographer) shared readings that celebrate the exquisite beauty of nature and explained why trees and forests are important to all life. Cosponsored with the OSU's Sustainable Forests Partnership. (November 12, 2008)

In Let There Be Night: Testimony on Behalf of the Dark, twenty-nine writers, scientists, poets, and scholars share their personal experiences of night and help us to understand what we are losing as dark skies and nocturnal wildness disappear. This reading with Kathleen Dean Moore, John Daniel and Paul Bogard (editor) was followed by star viewing sponsored by Heart of the Valley Astronomers at Adair County Park. (October 18, 2008)