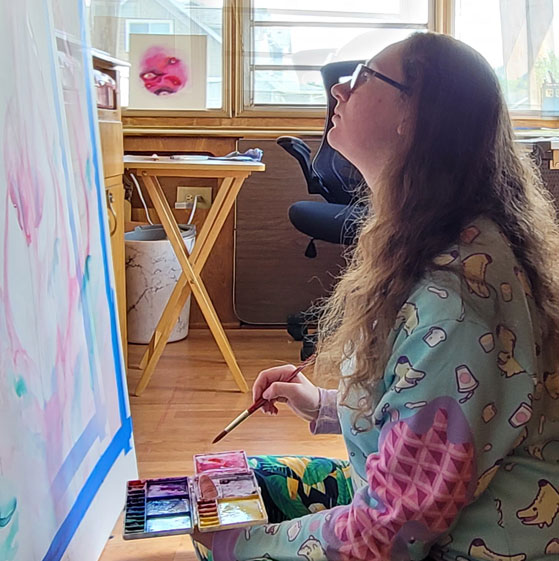 Degree: BFA in Fine Arts with a focus in painting, BA in Art History, and Minor in Writing.

What’s next: I will spend this summer visiting family, painting, and writing. After I take that time for myself, I will be looking for opportunities in art and writing in Washington.

It wasn’t until fairly recently that Alexandra Walchli began to think of herself as an artist, even though she’s been making art since she could remember.

Although she is originally from Oregon, Walchli, the daughter of a Master Sergeant in the U.S. Air Force, attended high school at an American air base in Ramstein, Germany. At that time, she says, she identified as “a band nerd,” having participated in band since middle school. She also participated in theatre, worked part-time at the commissary on base and was taking advanced placement (AP) classes.

“Art was a privilege of time. It was the last thing I would do, it was a reward for finishing my work, my homework, my other extra curriculars.” she said.

When it came time to decide on what college to attend, in-state tuition and the beauty of the Corvallis campus (it reminded her a lot of places in Germany) made OSU seem like a good fit. But Walchli had no idea what she wanted to study. An avid reader, she initially thought she might study literature, but in a moment of panic at her START session, she decided not to declare a major.

“I spent my first year exploring college. I did some theatre, I played sax in the marching band and jazz ensemble. I was just really active and trying to figure out what I wanted to do,” she said.

But art was always there in the background. Walchli says she thinks she might have wanted to study art all along, but was reluctant, for some reason, to admit that to herself. She recognized it as one of her passions, but she just wasn’t thinking about it as a career.

“Whenever I was doing music, I felt like I’d rather be painting. I kept craving to make art, but I was still in denial,” Walchli said.

Towards the end of her first year, Walchli decided to dip a toe in. She declared herself to be a literature major with a minor in art. After that, it wasn’t too long before she took the final plunge and declared herself an art major. Inspired by her teachers, art students who were further along in their program, and visits to Portland galleries, Walchli said she began to look at the art discipline in a completely different way.

“I finally realized that if I am at Oregon State, getting a degree, it should be in something I actively love and care about,” she said.

For the first time Walchli began taking art seriously. She began to view it not just as a means of illustration, but as an opportunity for growth and self-exploration. It was scary at first. A naturally quiet person, Walchli said she initially felt alone and it was difficult to build community in a medium that requires you to work so individually. But with more time on campus, and sharing the schedule and routine with other art majors, she became more comfortable with her peers, and with the physical tools of the discipline. But it wasn’t until halfway through her fourth year, Walchli says, that she really saw herself as an artist.

“I had stopped using pencil and pen to make art, and I started just painting with water colors on paper, without any plans or references. I made a stack of these paintings, and for the first time I had a lot of work, like I could flip through this stack and could see a physical reflection of a lot of work, rather than just one thing on a wall or in a portfolio.  I could really see my effort, and it was like, ‘oh, look at that stack of paintings I made, I can actually do this.’ It was a realization that I was capable,” Walchli said.

She decided to take a fifth year in order to have more time in the studio, more time with art faculty and to pursue a double major in art history. Walchli felt like she was finally ready to put her all into art. But then came the COVID-19 pandemic.

While visiting her partner, Taige Houk’s family farm during Spring Break, Walchli found out that the entire spring term of 2020 would be remote. She had been planning to move with Houk to the farm after graduation, so the couple decided to stay at the farm and ride out the pandemic there.

While she loved the farm, living there and trying to continue to paint and take her courses remotely proved to be difficult and trying.

“I missed that community I was finally comfortable with at Fairbanks Hall, and that physical space of the studio. The smell of oil paint and linseed oil, being in the studio until 3 a.m., taking the late night bus back to your apartment – those things were all part of the experience, and I really missed it,” Walchli said.

To make matters worse, at the farm, internet was iffy and she had no good place to paint. She’d been painting at a small desk in the living room. She had no place of her own. When she found out that classes would continue to be remote in the fall, she felt even more discouraged.

A studio on wheels 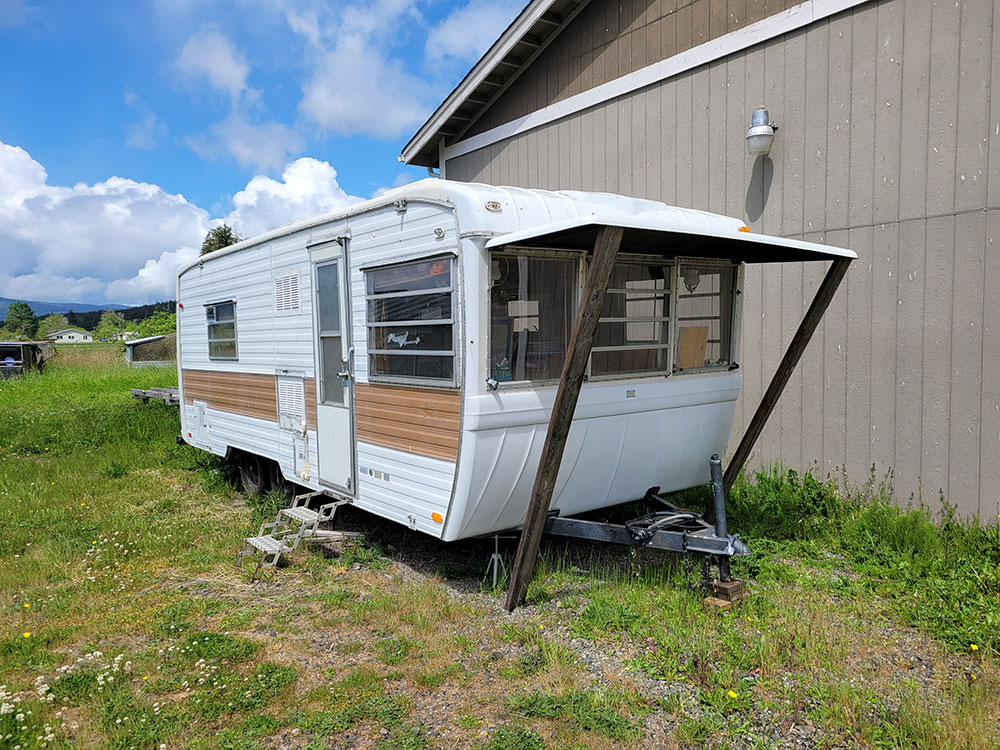 During that time, Walchli realized this wasn’t a temporary problem, it would continue beyond the pandemic. If she was going to continue to live on the farm after graduating, she would need a space of her own, a separation of home and workspace, a studio. She and her partner’s family considered building a shed, or converting an existing space into a studio, but during a birthday visit to see her own family, her father had an idea that would cost less and likely be faster and less work.

A used travel trailer could easily be put on the rural property. It would be pre-built, include some cabinetry and furniture, and have lots of windows for natural light. Serendipitously, a vintage 1970’s trailer posted for sale on Facebook. At a reasonable price, and with minimal work – Walchli and her father cut down the bed platform to create a bench, put on some new tires and did some water sealing. Walchli had an instant studio that was easily transportable from Hermiston, Oregon to the farm in Rochester, Washington.

“It’s been perfect. I have my own space. I’m happier. I started painting more. I would not have been able to create all the work I did for my senior show and complete my degree without it,” Walchli said.

Her art instructors have been dazzled by her studio too. OSU Foundations Art Coordinator, Anna Fidler, said, “Every time I visited (Walchli’s) studio via Zoom, I was so impressed and inspired by the environment she had built for her art practice. This life skill will serve her well for her life after OSU.”

Art Coordinator and Art History Professor Kirsi Peltomaki said, “Creating her studio on wheels and setting up her senior show in a shed are excellent examples of how the pandemic has been met by our students with creative, innovative responses.”

Walchli had her studio problem solved, but now she needed a place to exhibit and to photograph her senior exhibition for inclusion in the virtual West Gallery Exhibition on the art department’s Fairbanks Gallery of Art website, a requirement for her degree.

With support from her partner and his family, Walchli cleaned and painted an old storage shed. The makeshift gallery seemed like a perfect venue for an exhibit that was partially inspired by the stress and disruption of regular life over the past year.

“Technically, we aren’t supposed to use anything we’ve done before for our senior show, but the inspiration for my show started out with that stack of paintings I made, where I was just painting anything that came into my head. I’d also been making dream paintings, where I’d paint a scene from a dream, or respond to a dream, and as I continued doing this, I became more comfortable with painting spontaneously. I also needed something to do something to respond to this academic year,” Walchli said.

She needed a cathartic outlet, and it made sense to Walchli use the stack of paintings project for that. It was a senior project that wouldn’t add more stress to the picture, because, Walchli felt, it would be more personal, more interesting, and she would more actively engage with it. So she expanded the series.

The show is titled “Catharsis.” It is an exhibition of dream paintings and reflections on working through experiences and managing the invasive feelings of stress and anxiety. One piece is titled “Be Gentle with the Slugs in Your Stomach.”

“There’s this anxiety that permeates everything right now, and with our access to media, there’s just this constant influx of misery and tragedy. I mean there are wonderful things happening too, but instead of like before the pandemic, where we might have heard of a few tragic things at a time, now we are dealing with many tragic things all the time.”

That, Walchli said, has created a sense of underlying exhaustion and discomfort.

“It’s difficult to describe what that feels like, but I feel it in my stomach. And the only thing I could think of to describe it was as slugs moving around in there,” Walchli said.

The pandemic fueled her work. Walchli said the paintings for her senior show were an opportunity to develop and explore ideas that are difficult to articulate or express in words with the amount of sincerity, truth, and honesty that can be expressed through painting. In using images that are often strange or surreal, Walchli explores ideas more thoroughly. And, she says, there is less stress and strain in trying to explain to others what she’s feeling, because she has the painting to show it. As a writing minor, Walchli knows there are times when words can say what paintings can’t, but paintings, she says, can be more honest because they aren’t as easily manipulated.

“With watercolors, once it’s down, it’s down. You can’t keep editing like you can with words. With writing, you can go back and fix and fix and fix, until the end product becomes something other than its original intent. But with watercolor, the original intent is just there. I can only manipulate it and change it to a certain extent, but I can’t really cover it up,” she said.

“Catharsis” is available to view here.

“I haven’t had extensive time off since my freshman year. I’m taking a four-month break to just chill out, paint, visit with family, write, and after that I will look for jobs around the area where I’m living. Hopefully I can find something art-related in the area near Olympia (Washington), but, like many artists, I might have to get some kind of random job to support myself that doesn’t detract from my ability to paint on my own time. “

Fortunately, with her studio on wheels, Walchli has a good space in which to continue her artistry.