A Force FOR Change 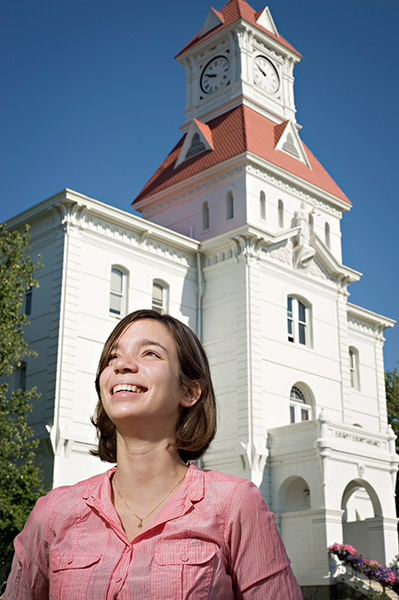 Amorim, a recent graduate from the School of Public Policy, was interning at an organization that serves survivors of domestic and sexual violence. A client was attempting to gain a restraining order against her ex-husband, who was abusive. He was stalking her, and using visits with their children to intimidate her.

She attempted a restraining order, but the judge, however, didn’t believe her.

She credits this realization to practical experience at the Oregon Policy Analysis Lab (OPAL) and the breath of focus in the Public Policy program, the first year of which is dedicated to coursework that explores policy through seven focuses, energy, environment, law, international, rural, science and social policy.

“Here,” Amorim says, “I’m in international, social, crime and law policy. You can make your own degree.”

Amorim’s social conscience was awakened in Brazil, where she grew up in one of the country’s most violent cities.

“It was intriguing for me, questions of how people start acting violently, and why some don’t get out. The concept of empowerment was always on my mind.”

As an anthropology undergraduate, Amorim studied the landless workers movement and Theater of the Oppressed, interactive productions that encourage participants to dramatize their stories.

But she was frustrated by the role of research in Brazil, “I published a lot, but my research didn’t bring them anything complete. The people I worked with gave me food, attention, information. I was thankful to them, but what I could give them was on paper,” she says.

She chose OSU because the research here is applied.

Through OPAL, she’s worked with the Benton County Sheriff to analyze and develop best practices in managing the sharp rise in mental health crises calls. This November her team will present research to the Willamette Criminal Justice Council and hopefully be awarded a grant to fund implementation of best practices.

She is currently writing a grant to fund a mobile domestic violence and sexual assault unit for Polk County that will bring services and resources to rural areas. She hopes that this will be a pilot program for counties in the U.S.

The ability to see policy from a global perspective was invaluable for Amorim, who says the highly international cohort in the policy program helped her see how policy is implemented all over the world.
“It’s been really enriching to see that there’s not just one way of doing things. That’s definitely something I’ll take with me,” she says.

This winter, Amorim returns to Brazil where she’ll research the issues in implementation of women’s progressive, but flawed, police stations and courts that are designated to address domestic and gender violence. There, she hopes her research will have an impact.

“There is nothing more powerful than social change,” she says.