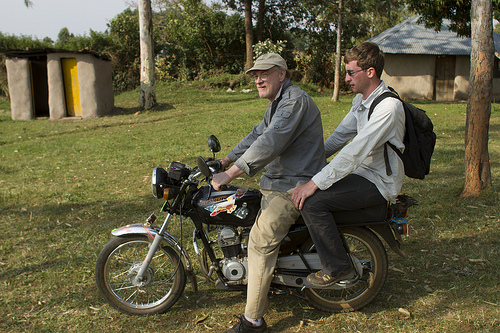 Oregon State was a clear choice for Zachary Dunn, who always considered himself a problem solver with a passion for public service. The university is renowned for its engineering program and research opportunities, which were up Dunn’s alley. Couple that with the fact that Dunn’s hometown is Albany, and the choice seemed obvious.

But as Dunn started to define his goals more clearly, he realized that an undergraduate engineering degree would only get him partway to where he wanted to be—working in international development to eradicate poverty around the world.

Dunn, who graduated with an engineering degree in 2012, knew engineering gave him the skills to solve practical problems, like building a well to provide people with fresh drinking water, for example. But he wanted a broader understanding of why poverty exists in the first place, and how to work with people, politicians and institutions to resolve it.

“We have the resources to solve poverty. We produce enough food and can prevent deaths from diseases like malaria and diarrhea that kill 10 million children a year. It is not a technical problem but rather a political one,” Dunn says. “That’s why I switched from engineering as an undergraduate to public policy as a graduate student.”

Dunn, who has just begun his second year in Oregon State's Master of Public Policy program, feels that the skills he’s learning in the program are essential to bridging the gap between technical capabilities and results on the ground.

Using statistics-based policy analysis is just one of them. “There is a movement right now towards evidence-based policy. Showing hard evidence of program effectiveness is becoming a prerequisite to widespread implementation of poverty alleviation strategies,” he says. “The skills I’m gaining now are crucial for my career path.”

Currently, Dunn is living in Nairobi, Kenya, on a prestigious Boren Fellowship, which allows graduate students to pursue their own research abroad while integrating foreign language study into their program.

Over the next nine months, Dunn will remain in Nairobi, studying Swahili and working on a project that will become the basis for his master’s thesis—a study on how weather insurance protects farmers from weather-related risks such as drought.

“Most smallholders lack access to financial services in rural areas, which means they bear the risk of crop failure directly. Weather insurance pays farmers in times of drought when their crops are failing,” Dunn says.

Several weather insurance programs have been piloted in Kenya since 2008, according to Dunn. His goal in his research is to investigate the effect the policies have had on small farmers since then.

The Boren Fellowship is not Dunn’s first experience in Kenya. During his undergraduate experience in engineering, Dunn volunteered with the Oregon State chapter of Engineers Without Borders 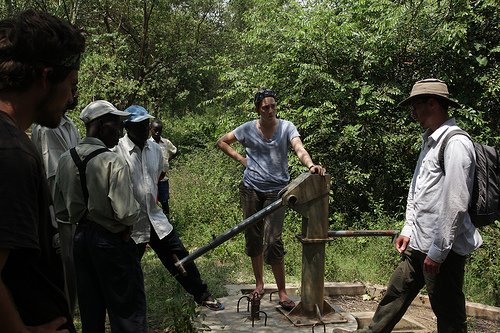 USA, a humanitarian group that partners with developing communities to improve their quality of life.

In a rural village called Lela, Dunn and other volunteers addressed the community’s pressing need for clean drinking water, and in partnership with Lela’s citizens, built a well that would alleviate the issue.

“It’s a visceral experience – leaving your home country, going abroad, and suddenly understanding all the things you take for granted,” Dunn says. “Clean water, electricity, sanitation facilities, basic things, that you realize are not universal around the world.”

To Dunn, it’s also important to keep the spirit of partnership when doing international work.  “I think it’s a mistake to see us somehow as saviors or people that have come to the rescue,” Dunn says. “So it’s very important for us to have a sense of humility in these projects.”

Recently, Dunn’s work in Lela was documented in the short film Kel Wer.

The Lela experience was formative for Dunn, who was beginning to broaden his perspective while he was working in Kenya. It made him think more about international policy and development. “It’s one of those experiences that defined the career path that I want to go down,” he recalls. “It helped me solidify my personal and career goals.”

After a friend had raved about the Oregon State School of Public Policy, Dunn started to strongly consider continuing his graduate work here. “It’s very uncommon for liberal arts students to be fully funded, which is one of the big benefits here at Oregon State,” Dunn says.

Dunn was also impressed with the interdisciplinary nature of the program, in which students take classes in economics, political science and sociology. The international cohort was also a draw, and so was a newfound methodology for solving problems.

“I think liberal arts may be more holistic in terms of the approach it takes to defining what the problem is,” he says. “For example – in sociology, even defining what a problem is, is very subjective.”

In his classes, Dunn and his cohort consider the effects of a policy, positive and negative, and use that information to determine which policies to pursue in the future.  “The program teaches us both quantitative and qualitative methods for policy analysis,” he says.

Ultimately, Dunn wants a career that will help him solve problems. But to him, international development work is more than that. “More important than making a career choice is making a life choice. What kind of person do I want to be? Solving problems means having the vision to see what needs to be done and the courage to make it happen,” he says. “I don’t have all the answers, but I also believe in my ability to have a positive impact on the world.”

-Story by Connie Du, and photos by Justin Smith