Shane Scaggs’ passion lies at the intersections of anthropology and ecology. He loves studying communities, the land they inhabit and how the two influence each other. For Scaggs, a graduate student in anthropology, there’s no better place to do this than the Yukon-Kuskokwim Delta in western Alaska.

Scaggs focuses on the role Delta communities’ social fabric plays in a place where people have traditionally relied on wild-harvested food, yet are increasingly dependent on a cash economy and wage-based jobs. He wants to know what species community members still harvest, and whether they work together to do so. He also wants to know whether people are sharing resources with each other.

These social bonds are at the heart of his research.

The knowledge he gains will help anthropologists, like his advisor Drew Gerkey, understand how traditional hunting and harvesting skills adapt to a changing world.

What makes Scaggs’ work unusual is how he’s combining research methods from ecology and anthropology. Ecologists are interested in asking the same kinds of questions regarding environments where wide varieties of species interact with one another. Then they develop equations to answer them.

Scaggs looks at variation, too, but from a human perspective. For instance, Scaggs wants to understand variations in traditional harvests by studying the connections of the people and households that share or process food together. Some households, for example, harvest only major species like salmon, moose and caribou, whereas other households harvest up to 30-40 different species. Households can then be given a biodiversity score, which is similar to the score an ecologist might use for a plot of land.

Gaining a deeper understanding of the variation in those harvests and households will help him create a picture of whether subsistence practices are threatened, which in turn will help communities devise ways to sustain them.

“People learn best through storytelling, and I think even in the sciences, it’s very clear that context and rich detail is an important thing,” Scaggs says. “Anthropology makes this storytelling possible.” 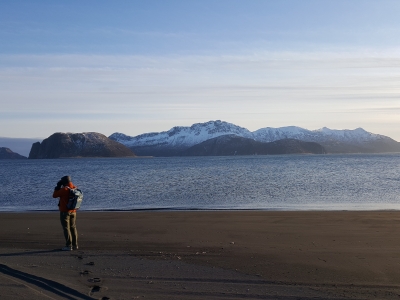 In communities like the Yukon-Kuskokwim Delta, there is concern that traditional knowledge of subsistence practices is in danger of being lost as people transition to a cash economy, combining the work of harvesting with wage-based jobs.

Using Scaggs’ research, Gerkey is exploring the relationship between diversity of harvests and traditional ecological knowledge. Fewer species might be harvested because of the attempt to balance a 9-5 job with subsistence practices, and this could affect the transmission of ecological knowledge and harvest practices across generations. Gerkey says the question of what the future looks like fifty years from now – 9-5 jobs, harvesting, or a combination of the two – has been of interest to Alaskans for a long time.

“Shane’s perspective, one that I share as well, is that our role as anthropologists is to take this data that already exists and use whatever techniques we can to generate insights on it,” Gerkey says. “Then we can communicate it to community members to see if it’s useful for them for their own goals.”

One example of this might be community-level programs that match children and young people growing up in households without parents or guardians practicing these harvesting techniques with other adult community members who have that traditional knowledge.

“We want to see if policymakers can better design their policies to serve the community’s needs,” Gerkey says.

If a community were to deem this preservation work important, Gerkey says he and Scaggs could help them appeal to policymakers at the state or federal level using their data and research.

Funded by the National Science Foundation

Another indicator of the importance of Scaggs’ research is that he was recently awarded a fellowship from the US National Science Foundation's Graduate Research Fellowship Program (GRFP).

The GRFP is the National Science Foundation’s premier fellowship for early-stage graduate students, providing a three-year annual stipend in addition to a cost of education allowance for tuition and fees. The GRFP is offered in every field covered by NSF, and competition is intense. This year, NSF received over 12,000 applications and selected 2,000 of these for awards.

In Scaggs’ field, cultural anthropology, he was one of only 12 awardees for 2018.

“They’re making a three-year long investment in a student,” Scaggs says, “and from your proposal they want to know that you will go on to do work that they care about.”

The fellowship is a vote of confidence in Scaggs’ abilities as a researcher, a responsibility he takes seriously. The fellowship will allow him to continue telling stories through his research both in a doctoral program and in the field.