Bard in the Quad returns this Summer

When she got the green light to bring the Bard back to Oregon State University’s Quad this summer, it didn’t take long for Elizabeth Helman and her colleagues to settle on which one of Shakespeare’s plays to produce.

“We knew that we would want to do a comedy and something kind of happy in view of what’s been going on,” said Helman, an OSU faculty member and longtime Bard in the Quad director. Eventually, one of Shakespeare’s comedies rose to the top of the list.

“Ultimately, we thought, let’s do the silliest comedy, the absolutely goofiest,” Helman said.

And that would be “The Comedy of Errors,” Shakespeare’s earliest comedy – and, at 1,786 lines, the shortest of his surviving plays. (The longest, “Hamlet,” clocks in at 4,024 lines.)

“I mean this in the most loving way,” Helman said: “This is Shakespeare’s dumbest play; it’s dumb, but in all the best ways.”

This is the play in which the Bard rolls out not one but two sets of identical twins, accidentally separated at birth, who all find themselves in the Greek city of Ephesus during the course of one madcap day. The stage is set for mistaken identities (over and over again), and the play is filled with broad physical comedy. It starts on a somber note – with the pronouncement of a death sentence – but it ends with a joyous family reunion, a long-suffering man’s life spared and new (and renewed) romance in the air.

This is the second time Helman has directed “The Comedy of Errors” for Bard in the Quad: “I just can’t get enough of that ‘Comedy of Errors,’ I guess,” she joked. Her 2013 production drew some of its visual inspiration from the TV show “Jersey Shore.”

For this production, “we wanted to go back to the ancient world but approach it in a very cartoonish kind of way.” And Helman also drew inspiration from an unlikely source: The energy, pace and tone of music videos – most notably, Katy Perry’s “Last Friday Night (T.G.I.F),” with its raucous party imagery and vibrant colors. That video, she said, has a tone that Helman wants her production of “The Comedy of Errors” to share: “It’s fun and playful and silly and sometimes a little sexy and sometimes a little dirty but never taking itself too seriously.” 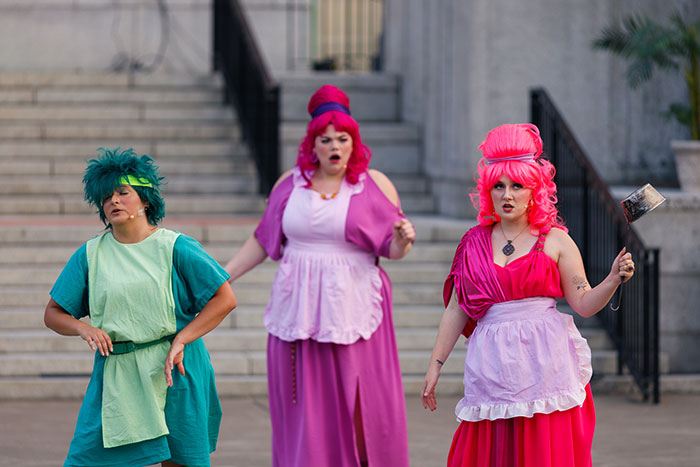 Those vibrant colors – “like a box of fluorescent Crayola crayons,” Helman said – also are part of the production, thanks in part to the costumes by DeMara Cabrera.

The colors play another role in the production: Color-coding the outfits worn by the two sets of identical twins helps the audience keep track of who’s who. And better sound, courtesy of a new sound system, should help provide clearer sound for Shakespeare’s words, from the basest pun to the most heartfelt pathos. “Shakespeare appealed to highbrow and lowbrow,” she said.

“He can be extremely lowbrow and full of dirty jokes; that’s one of the reasons why we like Shakespeare,” she said. “But he also gets very deep into the complexities of the human condition and it’s fun to see that. It’s fun to see that even in a play that’s so silly.”

After the coronavirus pandemic scuttled last year’s Bard in the Quad production, Helman and crew produced an audio version of “Macbeth.”

“I was really happy with how it turned out – we had cool music and scary sound effects. But the whole time, of course, we’re thinking, oh, ‘this would be so much fun to stage, with quarterstaffs and broadswords and all of it.’”

So the cast and crew of “The Comedy of Errors” are thrilled to return to live theater.

“Everyone’s just been looking forward to be able to do live theater and to have that opportunity,” Helman said. “Everyone’s looking at this as kind of a gift, and hopefully we can really spread that joy to our community.”

What: "The Comedy of Errors," produced by Oregon State University's Bard in the Quad

How much: Ticket prices are $15 general admission, $10 for students and seniors and $5 for OSU students. You can buy tickets at bardinthequad.org or by calling the OSU Theatre Arts Box Office at 541-737-2784. A box office facility located in the center of the MU Quad opens each performance evening at 6:30 p.m.

Of note: This is an outdoor performance and no seating is provided, so bring blankets or low-back lawn chairs and warm clothing – the Quad can become chilly after sunset.