Caring for Mothers and Babies

Horan, an applied anthropology Ph.D. candidate, and Cheyney, an associate professor of anthropology and midwife, were spreading the word about a new program that trains people to become doulas for pregnant women on the Oregon Health Plan, the state's Medicaid program overseen by the Oregon Health Authority. The Community Doula Program (CDP) also pays for doulas to become registered traditional health workers in Oregon, making them eligible to receive Medicaid reimbursement for their services.

Horan, who coordinates the program, hoped that 30 people might express interest in the training.

Instead, more than 100 came to the recruitment meetings. To date, 70 people participating in CDP are currently serving as doulas.

“We had no idea there would be so many people interested in doing this work,” Horan says.

Doulas in the CDP provide two prenatal visits with expecting mothers after 30 weeks of pregnancy, attend labor and delivery and conduct two postpartum visits in the first six weeks. Their physical, emotional and educational support can be vital, especially when it fills a gap in natal care for vulnerable communities.

The CDP, headed by Cheyney, launched in January 2018 and is funded by the InterCommunity Health Network CCO, whose mission is to unify health services for OHP recipients.

Cheyney received $190,000 from the network to study whether birth outcomes for vulnerable populations would improve if they had access to a doula, especially if that doula is from a culturally or socially-matched population.

“We have doulas who have experienced homelessness or who are in addiction recovery. Some have had high-risk pregnancies, were young moms, or speak other languages and have learned English as a second language,” Cheyney says. Matching doulas and expecting mothers with similar experiences, identities or backgrounds can make a huge difference, she insists. “Simply treating someone with dignity and respect and making them feel loved during a moment of their life they’ll never forget can be truly transformative.” 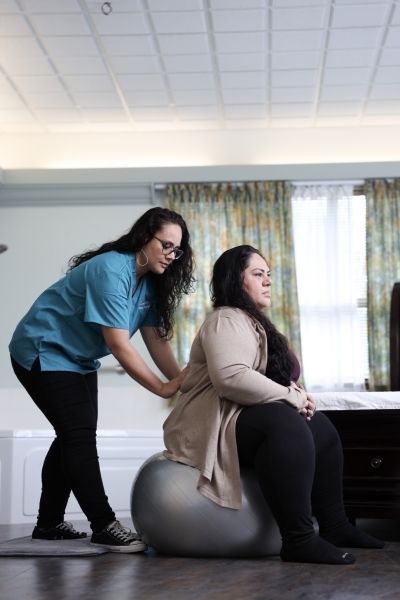 The doulas participating in the CDP come from these diverse backgrounds and include OSU students and community members. The CDP has recently celebrated the program’s 100th referral, as well as their current caesarean rate of 6%, which is well below the national average of 33%.

“Just having that person in the room has proven instrumental in lowering the rate of clinical intervention and producing better birth outcomes,” Horan says.

What’s more, Cheyney and Horan made sure the cost of registering as a traditional health worker was written into their funding. Only doulas who become state-registered can be reimbursed by Medicaid for their work, and the costs of registry-required trainings can range as high as several thousand dollars. This financial barrier makes it more difficult for some doulas to acquire training and get on the registry.

“We wanted a more diverse representation of doulas on the registry,” Cheyney says. “And because Medicaid will reimburse them, our project has long-term sustainability.”

Cheyney and Horan are already in the third phase of the project, which is to collect and track data from the doulas and expecting individuals participating in the CDP over the next year. Alongside other researchers at OSU, they will compare the data from doula and non-doula supported births to see how doula care impacts both maternal and infant health. They will also investigate how having a doula may affect healthcare costs and savings.

While other states have shown that doulas are a cost-effective way to improve birth outcomes, the CDP is the first study of its kind in Oregon. Cheyney and Horan are excited to take this work on.

“Everyone’s alive at the end so you did a great job? No, everyone should be alive and well and empowered by their experience and ready to go into parenting feeling capable. That’s what we’re after,” Cheyney says. “Our goal is to share our knowledge and make meaningful changes to the system.”