For the past decade, the maker movement — and its celebration of hands-on innovation, craftsmanship and technology — has been gaining traction all over the world. Three years ago, Oregon State hosted its first “maker fair,” and the campus-community partnership that brought it to life is still going strong. The group, called The CO•, has now expanded the event into a two-day celebration with a focus on the arts as well as STEM education. On April 8, the CO• will host an afternoon symposium with leaders in policy as well as the arts, engineering and mathematics. On Saturday, April 9, there will be a maker fair on the OSU campus in Corvallis. Both events are free and open to the public.

We recently had the chance to talk with Charles Robinson, The CO•’s coordinator, about this year’s events and the maker movement at Oregon State.

What is the CO• and how did it come about?

The CO• is a group of people at Oregon State and beyond dedicated to promoting hands-on learning experiences for people of all ages. We’re now in our third year. It began as a grassroots collaboration between people on campus and in the Corvallis community who have a passion for making things. Period.

Tools — be they technological or intellectual — that aid innovation, creativity and communication have become more affordable and more accessible, and that’s helped fuel an explosion of “making” in the past 10 years. The broader maker movement on and off college campuses around the country, both on college is a product of this.

This trend shows up in technologies we recognize like 3-D printing. But it also shows up in experiential and hands-on learning, an idea that’s percolating through K-20 education. With the CO• we’re bringing together makers from all walks of life, the premise being that by sharing what they love to make they communicate the value of it. They also communicate their methods, and above all the power of learning by doing.

How do you introduce people to the idea of being a maker if they’re not already familiar with the term or the maker movement?

It’s one of the questions that drives the CO•, and why we do what we do. We find that the act of creating something is the fundamental human verb. Put simply, everyone is a maker.

Making does include many things that are stereotypical of the maker movement, like 3-D printing, Raspberry Pi and Lego robotics. These are all wonderful. We love the potential of exploration in those realms that fuel both a creative economy and a creative human.

By defining making broadly, we tap into a power that extends even further than some of the widely understood meanings of “maker.” For instance, there’s the STEM to STEAM movement, which underscores the importance of the arts in science, engineering and math education.

We see makers as traditional artists and craftspeople, as well as technical wizards and hackers. We see makers of knowledge — like historians, community activists, as well as innovators in the fields of forestry, business, and science. 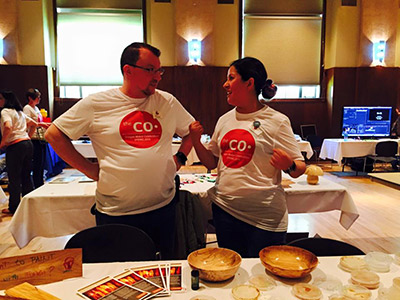 And even makers of actual pie.

What’s in store for this year? Both Friday and Saturday?

Friday is our first ever symposium, from 4 to 6 p.m., in Room 100 of the Learning Innovation Center on campus. We will bring together makers of objects and makers of policy in a discussion around STEM to STEAM and the promises of hands-on learning.

Our guest list includes U.S. House member Suzanne Bonamici and Eric Schulze from the web series “Ask Smithsonian.” The event is free to everyone, and we’re hoping that we can have a conversation that involves voices from many different places in society in the STEM to STEAM debate. We’re also going to be livestreaming it and letting people Tweet questions (#TheCoCorvallis).

Saturday we will hold the Corvallis Maker Fair from 10 a.m. to 3 p.m. in the MU Ballroom and outside under the SEC Plaza. It will feature 40-plus exhibitors from OSU, Corvallis, Albany, Eugene, Portland and beyond. It’s going to be a fascinating mix of campus and non-campus groups.

We’ll have traditional maker groups with 3-D printing and lab robotics, but will also feature artists and craftspeople — among them will be OSU art instructor Michael Boonstra helping people make wooden selfies.

Our single requirement for all of our exhibitors is to share in a hands-on way their passion for making. Every visitor will be able to roll up their sleeves and get their hands dirty here. It’s not a trade show or craft fair, it’s a “Come share how we do this,” event.

For example we’ll see how physics teacher Mike Town uses skateboard design to teach and will offer a workshop inviting people to make skateboards throughout the day.

The fair is for all, of all ages, interests, and backgrounds. There’s something for everyone.

What are you especially excited about this year?

Our symposium is a great new step for us, and we’re excited for the forum it offers to allow campus and community to explore topics related to making and hands-on learning.

There’s a reception after the symposium on Friday, from 6-8 p.m. in the SEC Plaza. It’s a welcome for the entire campus and Corvallis community and a way for us to offer thanks to our many partners and supporters. Several local makers will be on hand to share their locally crafted beverages, and OSU Catering is pulling out all the stops to feature Northwest cuisine.

Anything else to add?

We are the first to say that a maker fair is about celebrating the fun stuff. We're also passionate about bringing transformative and innovative learning into the classroom, exploring new partnerships, empowering diversity and engaging alumni. Because we are a land grant university, our mission is to serve all Oregonians, and to shed light on new avenues of research and scholarship.