Some of the subjects gesture more emphatically with their hands. Others use inflection to show emotion, their voices rising and falling with their words, as though they were eyebrows. These conversations, captured on video, are lively and varied — and completely without facial expression.

In assistant professor Kathleen Bogart’s lab, videos of conversations between people who experience facial paralysis are helping build a greater understanding of how people with disabilities and impeded communication are perceived by others. Bogart, who teaches psychology, is one of a small number of researchers around the world studying facial paralysis. And she’s part of an even smaller and more unique class as a researcher of disability who is herself disabled. 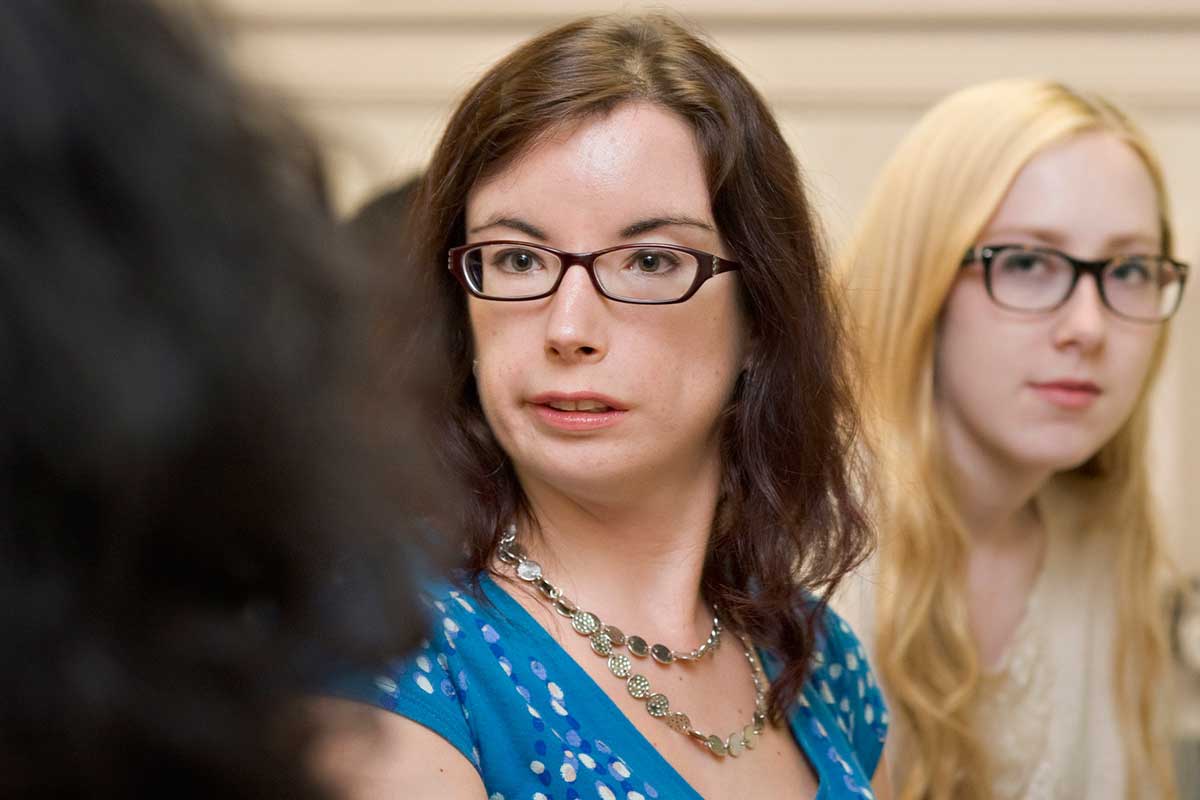 For Bogart, how people with facial paralysis interact with others is a personal question as well as an academic one. Bogart was born with Moebius syndrome, a disorder caused by underdevelopment of the sixth and seventh cranial nerves that results in partial or complete facial paralysis. The experience of learning to use her voice and body to interact with others who might not understand her disability made Bogart particularly attentive to how people communicate.

“Just growing up with Moebius and having this very rare condition that no one could recognize with meeting me, I found it very interesting to interact with people,” Bogart says. “I was really fascinated with facial expression and the way people express themselves.”

That interest, coupled with the realization that facial paralysis had rarely been researched in psychology, motivated Bogart to begin studying how people with facial paralysis and other disabilities interact and communicate. For the more than 130,000 people in the United States alone who experience facial paralysis, and for others with disabilities or difficulty communicating, she hopes her research can lead to increased awareness — and acceptance.

The impact of disability

In Bogart’s lab, junior Mariah Estill works with the videos of conversations, transcribing audio, cropping images and helping to create surveys that address the way others perceive the emotions of a person with facial paralysis when they are speaking. For Estill, who is studying psychology and pre-medicine, Bogart’s teaching in the classroom inspired her to do more by joining the lab last fall. Estill says that Bogart’s perspective on how people with disabilities are viewed differently resonated with what she observed when her mother was disabled as a result of an accident during Estill’s senior year of high school.

“My mom had to be in bed for a year and then she got a wheelchair, and then a walker, and it was interesting to see how people were treating her like she was really old even though she wasn’t,” Estill says. “It changes how people perceive you.” 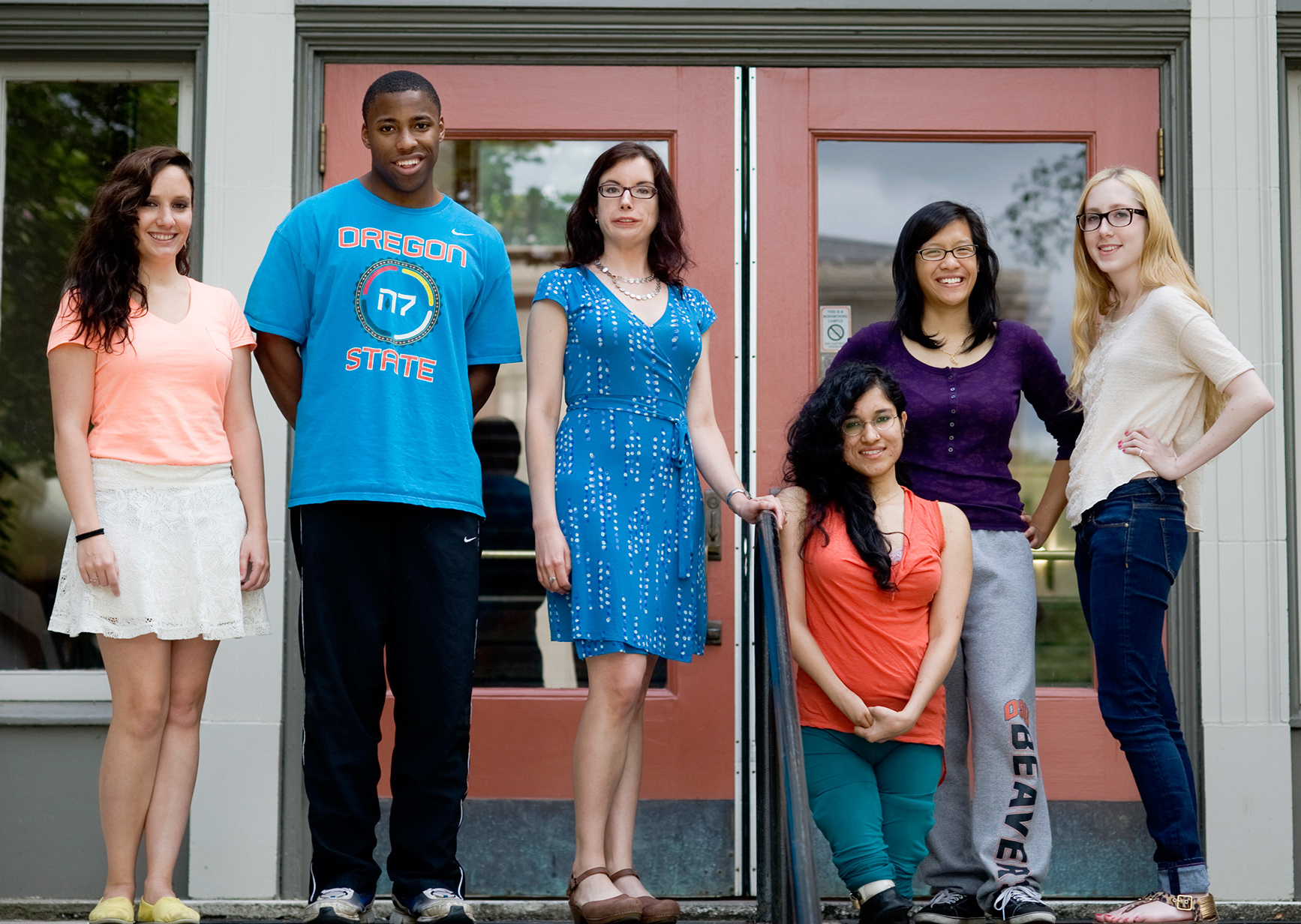 Estill’s experience demonstrates the wider relevance of Bogart’s work, which applies not only to those who are disabled from birth, but to anyone who experiences disability or impaired communication for any period in their life. Though Moebius syndrome is a disfigurement individuals are born with, partial or complete facial paralysis can also be acquired through other conditions such as Parkinson’s disease.

For those who acquire disabilities later in life, Bogart says, learning new methods of communication can be even more difficult. And she believes this makes her research even more important to people with and without disabilities, because anyone could one day find themselves in a situation where communication is impaired, whether by difficulty speaking or hearing, or by linguistic or cultural differences.

Bogart’s drive to expand research on facial paralysis has led to a broader opportunity to engage people in conversations about disability, not only through her own work, but also by encouraging others with and without disabilities to think about these issues themselves.

“Just raising awareness and a dialogue about disability in general is important because people won’t be comfortable interacting with others with disabilities until they’ve had a chance to understand what disability is and how to comfortably interact with someone,” she says.

An important component of that awareness, Bogart says, is her work with students in the classroom as well as the lab.

“I really like working with undergraduates,” she says. “I think they’re the population that will go out into the world and make these changes that we’re trying to study in the lab.”

Estill says that by working in Bogart’s lab this year, she’s already experienced a broadening of perspective that she plans to take with her into her interactions with patients in the medical field.

“Through working with her I’ve learned a lot about different aspects of disability that I wouldn’t have thought of before, like what it really means to be disabled,” Estill says. “So many people have disabilities, yet it’s something that’s really under-researched. I don’t think all the responsibility should be on people who are disabled.”

For more information on student research opportunities in the Disability and Social Interaction Lab, email Kathleen.Bogart@oregonstate.edu.

Learn more about Moebius syndrome and the people who experience it at moebiussyndrome.org.