Editing The Bard: How OSU Students Modified Romeo and Juliet 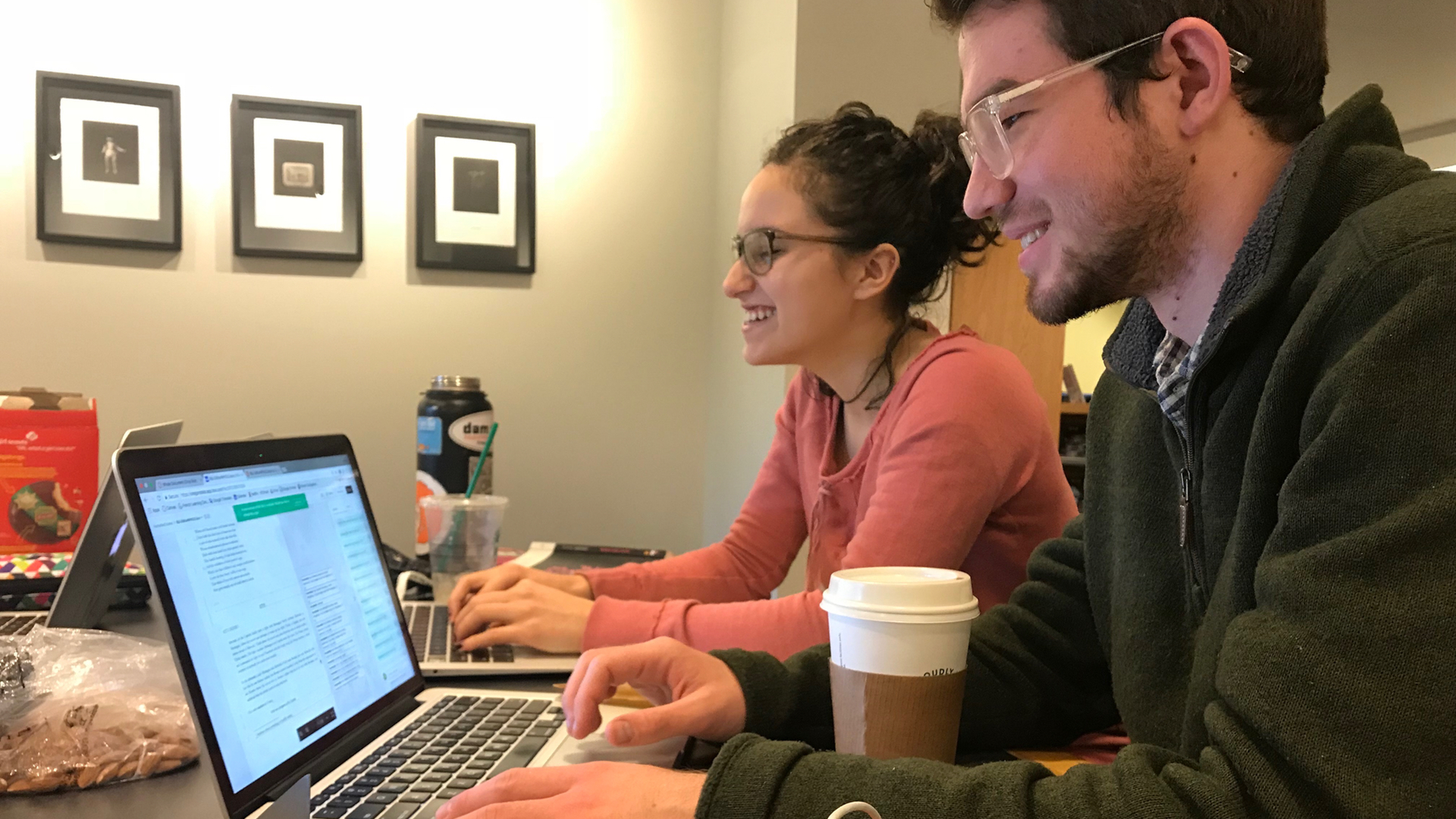 A group of dedicated Oregon State University student writers and editors released a new version of William Shakespeare’s Romeo and Juliet this past October. The play is now live on OSU’s Valley Library website after roughly ten months of work. It was overseen by Associate Professor Dr. Rebecca Olson, who specializes in Early Modern and Renaissance literature. She received an Open Education Champion Award at the Open Educational Resources Symposium in Eugene on May 17 for her work on this project. Dr. Olson describes her student’s efforts as, “not your grandfather’s version of Romeo and Juliet.”

Many students dismiss Shakespeare for being unrelatable, outdated, and confusing. This is exactly why this group of English majors came together to create a brand new version of his most famous play—to make it more relatable, modern and understandable. Michelle Miller, a recent graduate of Oregon State and a student editor on the project explains, “The reason why students don’t like Shakespeare is because they’re uncomfortable with him. We wanted our edition to make them care.”

The goal was to edit the play with high school students in mind, given that younger students have consistently had the most trouble appreciating Shakespeare. Now, this doesn’t necessarily mean OSU students completely rewrote the play. They made sure to combine the most well-known versions of his beloved classic, including relevant footnotes as well as side notes and summaries to help students with language comprehension, among other concerns. “An editor makes thousands of decisions, all with the goal of producing a text that meets the audience’s needs,” Dr. Olson says. Specifically editing for students creates an interactive learning experience, capable of bringing the play to life on the page. Only when those students understand what they’re reading can they really engage with the text. This doesn’t just get them an A in English class, but it can also help them to bear witness to a snippet of history from the 1600’s. Miller says, “Reading Shakespeare can give you a perspective that is not the same as history books or scholarly essays.”

What also makes this project so important is that Shakespeare is so commonly taught—if not, over taught—in schools across the United States. Ethan Heusser, another editor and recent graduate of Oregon State, says, “Shakespeare is one of the most common culprits of the literary canon’s tendency to self-perpetuate. His language, stories, ideas and dramatic concepts are written off as trite, tired or cliché. But John Ashbery once described clichés as ‘holy,’ and for good reason: they represent the fundamental fears, joys, insecurities and values that are endemic to the human experience.” Though Shakespeare can be seen as overly dramatic, as Heusser describes, he remains a critical figure in the canon.

Miller points out that “the way we teach in high schools has changed so much, but the way we teach literature has changed so little. It’s not changing nearly as fast as any other STEM field.” Since education of these plays are often left in their own time period, the creation of a new version is critical for student’s engagement, awareness and cognizance of the text. Dr. Olson agrees, stating, “If we’re going to keep assigning Shakespeare in high schools, we need to be more careful about the editions we’re assigning.”

The editing process itself was a project all its own. Student editors looked at three different versions of the play: the first quarto, second quarto and the first Folio. Quartos were the very first versions of Shakespeare’s work, almost like drafts. Over the course of several years, Shakespeare and his actors would add lines and change words every season, thus creating several versions of the original play. Though Shakespeare never wrote these drafts down, audience members and actors would remember every line, write them out, print them and sell them for cheap. The first Folio was a collection of all of Shakespeare’s work after his death, put together by his actors. “When we edit Shakespeare,” Dr. Olson says, “we compare those different versions and figure out how to conflate them into a single, readable version.”

Once the editors had these versions in front of them, they’d study and compare them line-by-line, selecting the best-fit line for the play. These decisions would be based on meter, rhythm, comprehension and consistency of plot and character. Tessa Barone, a current OSU English major and editor during the project, explains her editing process: “I would read a line and try to figure it out. If I didn’t understand what was going on, I would refer to ‘No Fear Shakespeare’ on Sparknotes to see how they understood it. I would also look at two editions of Romeo and Juliet from two different publishing houses to see how they treated the line, see what footnotes they used and what summary they made.”

Some younger students have asked why we even bother to keep Shakespeare’s original language. If our modern society has moved past the kind of diction Shakespeare uses, why not simply read YOLO Juliet or watch West Side Story? Heusser answers this quite simply: “The form is the content.” People in the Renaissance era never actually spoke like Shakespeare’s actors, which makes his work a form of unique prose. The reason why people read Shakespeare and not the script from West Side Story is because understanding the plot is not enough. Heusser adds, “The words themselves are boxes of emotion and fossil poetry waiting to be opened and marveled at. Texts like YOLO Juliet have a better chance of being accessible on a plot level, but in exchange they sacrifice nearly all of that which makes Shakespeare truly transcendent.” And, funnily enough, Shakespeare could also actually be quite inappropriate and unconventional in his comedies. “If only kids knew how many phallic jokes were in Shakespeare,” Miller says. “He really wanted people to laugh at his jokes—that’s all!”

You’d think it’s unorthodox to edit the famous Bard’s work, too, however modern editors do this all the time. Any version that we can find in a bookstore today has been edited and collated to best fit the needs of the average reader. “We have to decide how we want to format the play,” Dr. Olson explains, “whether or not we want to modernize spelling and punctuation, and what words we want to define in footnotes and glosses.” Since Shakespeare’s work was never technically written until others transcribed them, this means there is no definitive “Shakespearean text.” However, there does come a time when altering a word or phrase is needed to simply have it make more sense for a young, modern audience.

For example, Miller came across a line by a “servingman” in act 4, scene 3 when the Capulets are preparing for Juliet’s wedding:

his own fingers. Therefore he that cannot lick his fingers goes

The line essentially means that the servingman considers a chef to be inadequate if he refuses to lick his fingers as he cooks. However, it does not mean that a chef that physically cannot lick his fingers is insufficient. Miller, seeing this as a problem, decided to change the words “cannot” to “will not,” which she felt made more sense given the character’s intention.

Another example that Barone found as she was working on a majority of the footnotes in the edition was the phrase “over yond.” At first, she considered putting in a footnote defining “over yond” as a shortened version of “over yonder.” However, Barone found this problematic: why create an entire footnote or side note for a word that can easily be changed? She made the editorial decision to change the word “yond” to “there.” It doesn’t change the plot, character arcs or other dynamics in the play, but simply makes it slightly more readable for a younger audience.

If Shakespeare is going to be taught in every English or literature class in America, then students deserve to access the tools it takes to understand it. They tend to shudder at even the sight of Shakespeare’s work, simply because they can’t understand the language. Dr. Olson says a lot of teenagers hate reading Shakespeare; “I know I did,” she admits. Miller states that the language will often intimidate its readers. “We want students to feel like they can accomplish reading it,” she adds. “If they feel intimidated to read it, or too stupid to read it, they won’t understand the impact. If they read it in a way that is accessible for them, they’re going to feel empowered and will want to read more.”

With OSU students being closer in age to their intended audience—compared to older editors—they were able to identify with their readers more. Dr. Olson even learned from her own students that “the many things that are so hard or intimidating about Shakespeare are actually modern editing conventions.” This “by students; for students” version is superior in comparison to other publishers who don’t seem to care about the only demographic that actively reads Shakespeare on a daily basis: teenagers in high school classrooms.

Each student editor could easily remember what they personally had trouble with when they were assigned Shakespeare in their high school English curriculum. They took those high school experiences and combined them with their collegiate knowledge of editing to produce a more digestible and student-friendly version of Romeo and Juliet, suitable for all young adults. “I think everyone will enjoy reading my students’ edition of Romeo and Juliet,” says Dr. Olson, “but I think high school students in particular will find that they’ve done a good job anticipating the kinds of issues that they find confusing.”

This new, accessible edition of Romeo and Juliet is currently free and available online at OSU’s Valley Library website. Dr. Olson and her students knew they weren’t going to work on this project for a profit. The ultimate objective was to hope younger readers would be able to properly read, understand and value Shakespeare’s work. So, if you want to see this classic in a new way—even if you read it last week or several years ago—OSU students have the version for you.