The Heart of Corvallis

When Bre Miller (’09, Speech Communication) started as the Corvallis Knights’ director of business development in 2009, she wanted the town’s new college summer baseball team to become an indispensable part of the community.

So did her boss. “He told me, ‘I want you to be everywhere, all the time,’” she says, “So I started joining things.”

“I tried to immerse myself in in the Willamette Valley communities, and Corvallis especially,” she says. “I think we did a good job of supporting community events and integrating ourselves into the community.” 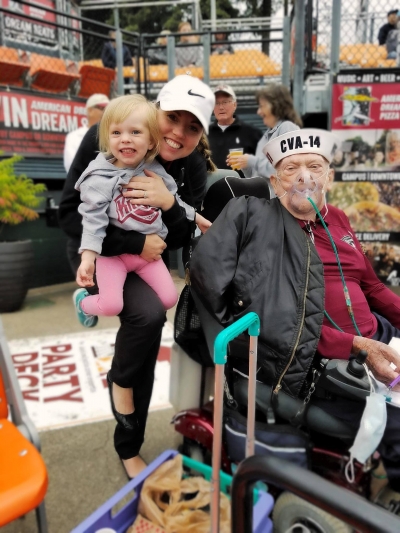 The work paid off. Miller, who started as an intern with the club in 2007, is now the Knights’ president and general manager. She still manages relationships with local businesses and organizations, but has added overseeing the company, as well as managing revenue and expenses and planning events to her list of things to do.

The team has increased its front office staff and continues to grow. In 2016, the Knights were selected as Corvallis’ Business of the Year, after fewer than 10 years in operation. Since their Corvallis beginnings, the Knights have also claimed the West Coast League title six times, qualified for the playoffs 12 straight years and seen more than 20 its players reach the Major Leagues including such Beaver greats such as Josh Osich, Andrew Susac and Matt Boyd.

Growing the Knights’ business and increasing attendance, which has quadrupled since its first season at Goss Stadium, aren’t the only things Miller loves about her job. In her role, Miller manages upwards of a dozen interns at a time, all of whom are learning valuable skills.

“We want our interns to be good communicators and team players,” she says. “We also talk about simple things like resume etiquette, and how to interface with our fans.”

One of Miller’s 2017 interns landed a full-time position with the Seattle Mariners, and another will start a new job with the Knights this year, as Box Office and Facilities Manager.

“The Knights are interesting because we’re a sports team, but we’re also marketing, sales, communications. We get students from all different backgrounds,” she says. “But we’re a family. And I want these students to leave better people, more mature adults and contributing citizens.”