Sarah McKenney’s first moments at the Oregon Shakespeare Festival in Ashland were ones of mild confusion. She and her friends from OSU’s Mask and Dagger Club were there to see two productions that day. Both took place on the same stage, in the same theater, only hours apart.

“I had to check my ticket twice,” says McKenney, who graduated in 2012 with a major in business and a minor in theater. “How are we going back into the same theater?”

The first set, for Measure for Measure, was simply three white walls, but more diverse than McKenney could have imagined. “They transformed the courtroom to a nightclub just by changing the lights,” McKenney says. “They had this awesome projector effect. They could create a million hallways in a courtroom scene. I kept thinking, ‘How did they do that?’”

McKenney expected to walk into the second show, “August, Osage County,” and see the same white walls. She imagined how the projector effects she saw in the first play could be applied during the second.

Instead, she was greeted with a full set, the centerpiece of which was a two-story house. “These people knew something that I did not. It took us months to build a set and create it, to put it on stage and take it down. These people could do it within two and a half hours,’” she says. “It was a mind blowing sleight of hand. And I wanted to be a part of it.”

McKenney’s experience at OSF cemented a longstanding devotion to the theater, and led to a career she would not have anticipated for herself. — working at OSF as a lighting technician and programmer.

“When I started doing lighting I didn’t think that was a field you could go into. You see actors and know about directors. I was surprised I could be one of those people who had those jobs. I didn’t even know it was a job,” she says.

McKenney is a member of a team that creates the sleights of hand that captivate OSF audiences, many of whom travel from across the country to see the performances. She has learned, though, that the effects created onstage for the audience are the result of an “all hands” effort from people behind the scenes.

“Once you get backstage, you realize there are no tricks. It’s actual brute force,” she says. “Seeing all these things later, and seeing how many people are involved — I know much more about all the departments and what they do. It’s a huge amount of work,” she says. 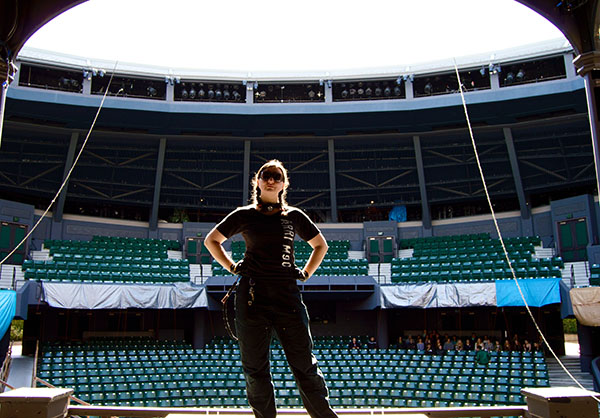 It is also requires a vast degree of technical skill. On any given day, McKenney might spend the day programming the lighting board in one of OSF’s theaters, bringing a lighting designer’s creative vision into reality. Or maybe she’s soldering hundreds of LED connections to create more than 100 individually flickering candles for the set of Hamlet. McKenney’s team has also used the same projection technology that hooked her on OSF to make the shadow of a flying helicopter in Vietgone, and the illusion of a single actor portraying twins in Twelfth Night.

She has assisted OSF’s resident lighting designer with LED detailing on costumes and fiber optic cloth for productions like The Wiz and A Winter’s Tale.

The biggest challenge McKenney’s crew faced during her tenure was summer 2015, when they were tasked with stringing eight 30-foot garlands of lights 30 feet in the air — from the gallery of OSF’s outdoor Elizabethan Theater all the way to the top of the stage.

The lights would only be used for one show that ran throughout the summer, and couldn’t stay up during the other productions that took place on the same stage. They developed a solution to keep the lights “gathered like an egg sac” in the upper gallery, and then string them along airline cable to the top of the stage before each show.

“The idea is to never say ‘no.’ That is the hope,” says McKenney. “It’s always exciting,  like, ‘challenged accepted.’ We feel like we’re the best crew, so we need to be able to prove ourselves all the time.”

McKenney almost always has a pocket or belt full of tools, and delights when she sees something she made in another production, like the 10-foot chandeliers she wired for the set of Much Ado about Nothing that were repainted for Twelfth Night. She loves that half of the lighting crew is comprised of women, and even loves the the frantic moments of improvisation if something goes wrong during a show – like a lightning strike or when the sound goes out.

For McKenney, OSF is where her creativity and her love of math, science and technology can come together. “In school I never thought the math word problems applied to me. Here, it’s super super interesting to learn how the computer chips work to make the candles flicker,” McKenney says. “It’s instant gratification, in the weirdest way possible. It’s the puzzles that create something beautiful and interesting in the end. It’s still magical.”

You can follow Sarah and other women on OSF’s lighting crew via #LadyStageHands, where thy often document their behind-the-scenes activities.