At the Intersection of Anthropology and Film

A change in plans gave anthropology major Buddy Terry (’18) the chance of a lifetime.

When a study abroad to West Africa fell through, one of his professors, Joan Gross, convinced him to come to South America instead, serving as the official documentarian for Oregon State Intercultural Learning Community Exchange Program in Ecuador.

Terry, who had recently won the School of Language, Culture and Society’s Study Abroad Award, agreed.

Making his film, “Food Connections Across Borders,” which focuses on the similarities between climate, geography, food and social justice in Ecuador and Oregon, was a trial by fire. Terry arrived in Ecuador with a limited academic background in food, and had never made a feature-length film before.

He lugged camera equipment through the mountains, jungles, and marketplaces of Ecuador, transforming countless hours of footage into a 45-minute narrative documentary. Before leaving Ecuador, the film was scheduled to be shown at a conference. Terry, along with Gross and three fellow students, completed the film’s subtitles just a day before the documentary was screened.

The film was a success.

The most important thing for Terry was focusing on keeping the various perspectives and value sets of the people he was filming at the forefront of his project. 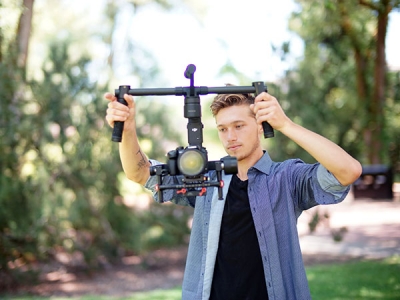 “Food is a cultural expression and an art form,” Terry says, and the documentary works to highlight the ways in which food brings communities together in both North and South America. But his biggest challenge was figuring out how to translate that connection in a way that represented multiple cultures and lifestyles in a cohesive way.

Both anthropology, Terry’s major, and filmmaking are, at heart, about storytelling, which is what helped Terry push through his original challenge.

“Anthropology gave me a 'big picture' perspective on culture, and filmmaking taught me storytelling. Uniting those two things has been a huge asset,” Terry says.

The film was also accepted to Sjon International Anthropological Film Festival in Copenhagen, Denmark and has been screened in other international locations.

Currently, Terry is the owner and operator of his own company called Threw & Through Media, working to capture events for companies and organizations. He’s hoping to keep making documentary films, and his dream project would do more work documenting politics in South America. But for now, he wants to keep producing professionally, potentially continuing his education with a graduate degree in visual anthropology.

“After just graduating, the world has never been bigger in my eyes. There are so many things and aspects to life I’d love to pursue, investigate, and document. I look forward to settling down and finding that thing,” Terry says.