Jordan Schnitzer, a Portland businessman, art collector and philanthropist, has contributed vast amounts of money and time to Oregon arts organizations. (In this, he followed the lead of his parents, Harold and Arlene; the Oregon Symphony Orchestra plays in Arlene Schnitzer Concert Hall.) The superb campus art museum at the University of Oregon bears Jordan Schnitzer's name, as do the museum of the University of Washington and the new Japanese Arts Learning Center at Portland's Japanese Garden. He heads the Jordan D. Schnitzer Family Foundation, repository of over 11,000 prints. The foundation has organized exhibitions in more than 100 museums.

Decades of Schnitzer philanthropy passed Corvallis and Oregon State by -- until April 3, when the Cultural Conversations show of Schnitzer Foundation prints opened at five OSU campus locations. The show runs through May 3. Admission is free to all.

Ray noted that Schnitzer, a U of O grad (BA, literature, '73), had donned an orange tie for the occasion. Ray, who had met with Schnitzer for over an hour earlier in the afternoon, hinted that the print show might mark the beginning of an ongoing relationship between the philanthropist and Oregon State. Ray also underscored his personal commitment to raising the arts -- historically, a poor relation of OSU's scientific, technical and agricultural divisions -- to equal footing.

Ray reminisced fondly about his undergraduate art appreciation course. He sat in the dark looking at slides and listening to a lecture among 500 other students. "It was as if a curtain were pulled back on a world I didn't know existed. Through the arts, we enable students to see what other people's imaginations look like. They give insight into the human condition."

Peltomaki, in curating the exhibition, spent hours in Portland browsing through folder after folder to find just the right work for OSU. She marveled at the opportunity, for herself and for the students who get to see this rare, important work.

"Look at it and think about it," she told the crowd, which would shortly split up and trek the half-mile art walk to all five locations. "And think about it again a month from now, or 10 years from now."

Rodgers attributed the excitement of the show and the day to the "generosity of Jordan Schnitzer and the support of Ed Ray."

"Just look at it, just feel it," he said. "Let yourself explore it." He also touched on a related theme, that the influence of the arts tends to permeate both personal and professional life, no matter the field of endeavor: "The idea that we can live in silos is over."

During the art walk, he engaged in an intense discussion with undergrads in front of four Mildred Howard prints at the Lonnie B. Harris Black Cultural Center. Amid 14 John Baldessari works at the Fairbanks Hall Gallery, Schnitzer addressed two dozen students as he expanded on a point he raised at Bexell Hall.

"You don't need to know anything about an artist to enjoy the art," he told them. "But at the school down the road, I studied American literature. I had read all the books already, and God I loved those books! And then I took a class, and the professor opened levels of Faulkner's Sanctuary that I had never thought of."

Without the aid of even a single note card, Schnitzer launched into a rich summary of Baldessari's biography and aesthetic, from origins in a working-class Italian family in National City, Calif., to his patchwork art education at three different schools, to art teacher at a juvenile detention center, to Baldessari's "cremation" burning of all early work and his emergence as a pioneering conceptualist.

Amid Baldessari's appropriated, doctored movie stills; a grid of a dozen photos of three colored balls shot in mid-air; and a print with "I will not make any more boring art" hand-written in cursive, line after line, school-room punishment style, Schnitzer arrived at a kind of thesis:

"Why be an artist? One, you have a burning message inside you. Two, you want to send it in a way that's never been done before.

"Baldessari confuses us... That's exactly what he wants to do. He stops us, grabs us, and makes us think. We get boxed into ways of thinking, and he blows that up."

Schnitzer and his division of students, professors, administrators and art fans visited Hung Liu's portraits at the Asian and Pacific Cultural Center and then Joe Feddersen's work at the Native American Longhouse Eena Haws. They ended their tour at Centro Cultural César Chávez, to see Enrique Chagoya's prints. Schnitzer spoke with fervor about all of these artists and their works.

"I don't have an art history degree," he said, later, at a joint interview with President Ray and Dean Rodgers. "I guess what I do is talk from the heart about the way the art speaks to me. I want to be down-to-earth, to help people shed their fear and experience and embrace art.

"But people do say, 'Boy, I never got this until you talked about it.' I always feel honored to open people's eyes to art. Every professor on campus can change lives like that."

Schnitzer, who had expressed surprise and delight at the large, enthusiastic turnout, appeared exhilarated after the tour.

"We may be rivals on the athletic field," said the life-long Duck, "But we want all our colleges and universities to thrive. I'm so impressed with Ed and what he's done to see the university through its transition. It's remarkable how Ed Ray has kept the university growing."

He noted that in his time at U of O, the school charged $172 per quarter tuition, and the state picked up 92 percent of the university's expenses. Those days are gone, he said, and the private sector will have to take up a good part of the burden of educating the present and coming generations. He wants the arts to be a part of it.

Ray agreed. He said that he was the first in his family to attend college, and he pointed out that 25 percent of OSU's students hold that same status. Thirty-seven percent qualify for Pell Grants.

"My world was devoid of art, literature and music," Ray said. "My literature, music and art appreciation courses transfixed me. Without the arts, the deprivation of the soul is palpable. These Cultural Conversation exhibits make art more real and approachable. Nobody's making judgments, nobody's being graded. There's a sense of intimacy. I want that for all our students."

Rodgers, whose College of Liberal Arts portfolio includes the six-program School of the Arts and Communication, must implement that vision.

"For a long time," Rodgers said, "OSU was so utilitarian that you couldn't think about anything non-utilitarian. But a university's job is to look at all the problems of the world."

Rodgers envisions critical masses of creative thinkers in all fields coming together in a vibrant, prosperous community.

"Why do people move to communities?" he asked. "It's all about the arts and culture. I have a daughter at U of O, and when we go to Eugene she can't wait to show her parents what's up at the Jordan Schnitzer Museum of Art. It's a place she's familiar with.

"I want people to take art for granted here. All kinds of students will have all kinds of reactions to this show, and we'll never know about it. And that's great."

"I had no connection with OSU," Schnitzer said. "His initiative impressed me. That's why we're here."

Ray, Rodgers and Schnitzer agree that the arts are integral to education, not expendable ornaments.

"The jobs of my parents and grandparents are basically gone," Schnitzer said. "More than ever, we need people who can think in a creative way. The challenges of the past are not the challenges of the future. We must evolve our institutions. The arts can help us do that. The arts are the vehicles that open our minds to new ideas.

"I love art, and I love sharing it even more. I would hope that every student will make going to an art museum a part of daily campus life."

John Baldessari at Fairbanks Gallery: Balls tossed into the air again and again, photographed again and again; if tossed up often enough, will they align? Baldessari's exercise in artistic chance operations stood at the forefront of an avant-garde interest not only in randomness, but in getting Romantic notions of personal expression out of the way of art. Baldessari, born 1931, was among the first to use found images, movie stills in particular, as raw material. Brain-teasers and sly artistic mischief abound in this show of 14 works.

Enrique Chagoya at Centro Cultural César Chávez: Chagoya (b. 1953, Mexico City), worked a variety of jobs before earning his BFA (1984) from the San Francisco Art Institute and his MA and then his MFA (1987) from Cal-Berkeley. He is now a full professor at Stanford. The lithographs at OSU combine highly skilled draftsmanship and biting, satiric hilarity.

Joe Feddersen at the Native American Longhouse Eena Haws:  Feddersen (b. 1953) now lives in his hometown, Omak, Wash. He studied at the University of Washington and the University of Wisconsin and has shown extensively around the country. Feddersen works in a variety of media, including glass and basketry, in addition to prints. The four very beautiful works at OSU appear to be maps or renderings of aerial photographs overlain with iconic shapes that resemble pictographs.

Mildred Howard at the Lonnie B. Harris Black Cultural Center: Howard (b. 1945, San Francisco), a legendary figure on her installations and in her 2D works. Four prints from the I've Been Witness to This Game series, from 2016, are on view at Oregon State. In all four, color monoprint, gold leaf, collage and found paper represent an ornate frame that floats on a white field and contains a bingo card. Over that card, beautiful African-American women, stiff as paper dolls, wear antebellum gowns, of the bustled, extravagant sort worn by 19th-century white debutantes.

Hung Liu at the Asian and Pacific Cultural Center: Hung Liu (b. Changchun, China, 1948) trained originally in the socialist realist style of the Mao regime. She emigrated to the U.S. in 1984, to study with Allen Kaprow at the University of California-San Diego. The three "Official Portraits" and one "Unofficial Portrait," lithographs with collage, echo the old socialist style: slightly larger-than-life scale, vivid colors, self-conscious conventional beauty, heroic, determined expressions. She adds whiffs of irony to the "official" images, by tucking grim state photo ID cards into bottom corners, like the fine print in pharmaceutical commercials. 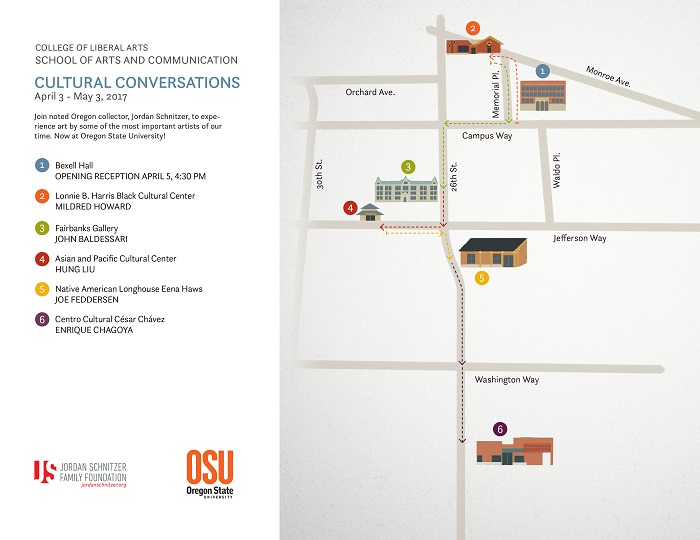