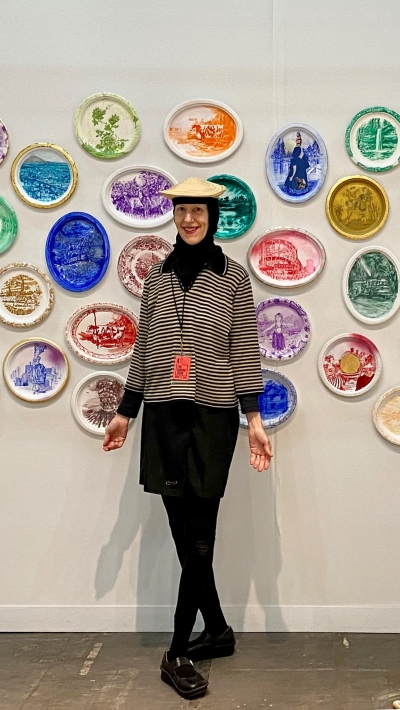 Oregon artist and OSU art professor Julie Green traveled to New York at the beginning of March to present recent paintings at The Armory Show, an annual art fair internationally renowned for modern and contemporary art. Green was represented at the fair by Upfor, a contemporary art gallery based in Portland, Oregon. The presentation included selections from two recent, ongoing series of work: Fashion Plate and First Meal.

Green’s work was awarded the fourth annual Presents Booth Prize. The prize recognizes an outstanding and innovative gallery presentation within the Presents section of The Armory Show, a platform within the larger fair for galleries no more than ten years old to showcase recent work fresh from artists’ studios. Green’s receipt of the prize was covered in national and international art industry publications such as Artforum and Artnet News.

“The Presents Booth Prize is significant recognition,” explains Upfor gallery manager Heather Lee Birdsong. “The Presents section at The Armory Show already represents a small selection of thoroughly vetted projects from all over the world. Being considered a standout among them speaks to the thoughtfulness, quality and originality of Julie Green’s work.”

In Fashion Plate, Green uses fashion as a focal point for meditations, both personal and historical, on a range of topics from gender norms to the effects of industrialization. The paintings themselves are circular or ovular, created on the unusual substrate of Chinet® brand paper plates, coated with “gesso,” a white paint mixture made from binder glue, chalk, gypsum and pigment. The diverse media used to paint the images include precious metal leaf, acrylic and glow-in-the-dark paint, collage, and pigment made with industrial sludge.

The selection of unusual materials alongside the more traditional is typical of Green’s approach: this eclecticism is also present in First Meal paintings, created in everything from acrylic paint, to embroidery, to a sachet of aromatic spices.

The series, begun in 2018, embodies themes of collective memory, loss, and social justice that are at the forefront of Green’s oeuvre. Works in the series depict first meals eaten by wrongfully convicted persons after leaving prison, based on stories generously provided to Green by the wrongfully convicted and, in most cases, the Center on Wrongful Convictions, Bluhm Legal Clinic at Northwestern University.

Green’s collaboration with the Center on Wrongful Convictions grew in part out of The Last Supper, a project about capital punishment in the United States, for which she paints the final meals of executed prisoners on found ceramic plates. It is perhaps the work Green is best known for, having exhibited widely and been covered by national and international publications since Green began it in the year 2000. The project is still ongoing, and winter months typically find Green painting and firing the cobalt blue images. The rest of the year, she dedicates her time to other projects.

In contrast to the uniform cobalt blue of Green’s The Last Supper plates, First Meal paintings on Tyvek are vivid acrylic. Some, reflecting the personal nature of the stories that inspire them, include sewn and collaged elements.

Like The Last Supper though, First Meal aims to stimulate thinking about the system of incarceration. We all have food in common, and Green encourages viewers to identify with the newly released as a basis for thinking through our system of criminal justice, and to develop a more thoughtful public conversation about its uses, abuses, and inequities.

The paintings are roughly flag-sized, a scale that alludes to the magnitude of a wrongful conviction. “I think of flags generally being something we are proud of, something to hold up, something to wave,” Green says, “but First Meal flags point to flaws in our legal system. They are pennants of loss.”

Our thanks to Heather Lee Birdsong, Upfor Gallery, and Julie Green for this story content.