An unlikely experience inspired Andrew Su (’16) to pursue a career in medicine — working door-to-door on state representative Knute Buehler’s 2014 campaign. Although campaigning did not move history major Su toward a career in politics, it showed him that a trajectory from the liberal arts to medicine was possible, and what kind of a difference Buehler, a surgeon, made in people’s lives.

“His journey from the liberal arts to becoming a doctor ignited the idea in me – I hadn’t even thought of the connection,” Su says of Buehler, who studied history at Oregon State, as well as politics and government at 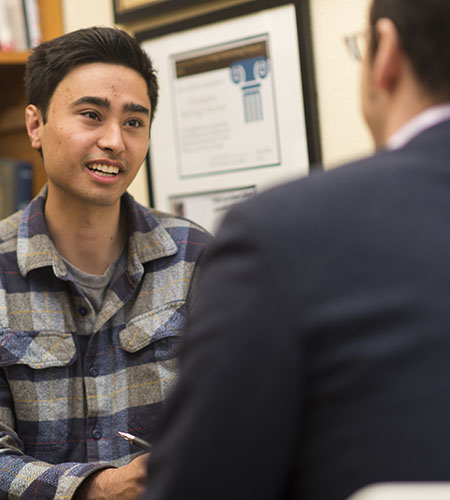 Oxford before heading to Johns Hopkins for medical school. “When I campaigned door-to-door with Dr. Buehler, we would run into patients all the time. ‘You have changed the course of my life,’ ‘Because of you I can walk again,’ they told him. He was making a direct, sizable contribution to people’s lives.”

That same summer, after working with Dr. Buehler, Su briefly shadowed his father, a podiatrist. “Seeing what the day to day life of a doctor looked like affirmed my passion. He was interacting with so many people every day, talking to them, learning their stories. It was like history,” he says. Stories had always fascinated Su, for the multi-faced way they could be approached as well as the encompassing view of the world they afford.

“I’ve always been interested in people and stories and how things came to be,” Su says. “It’s understanding a person’s background or why they are thinking the way they are. It’s the story of the world.”

The relationship between history and medicine didn't end there for Su. The winter following his internship, he began taking prerequisites for medical school. To his surprise, he found that his history courses (for which he was carrying a 4.0 GPA) changed the way he understood subjects like organic chemistry.

“I was interacting with the material differently than my straight science counterparts did,” says Su. “It wasn’t just reading the material and regurgitating it. You had to really think about it, and interact with the material more, and my history background prepared me for that. It was even different from science classes I took previously. I had a more broad approach, and feel an improvement after a couple of years of history.”

If understanding the story — how and why things work — is any indication of success as a doctor, Su will excel. He graduated with this spring with a near-perfect GPA, and completed a thesis on neutrality during wartime that spanned two centuries and continents. He worked on a multi-year program focused on citizenship with faculty mentor and Carnegie Fellow Christopher Nichols, all the while volunteering as for high school students.

Su plans on taking the MCAT in spring of 2017. In the interim, he is contemplating working for the U.N. High Council for Refugees.

“It goes along with my passion for helping people — and for history,” he says.