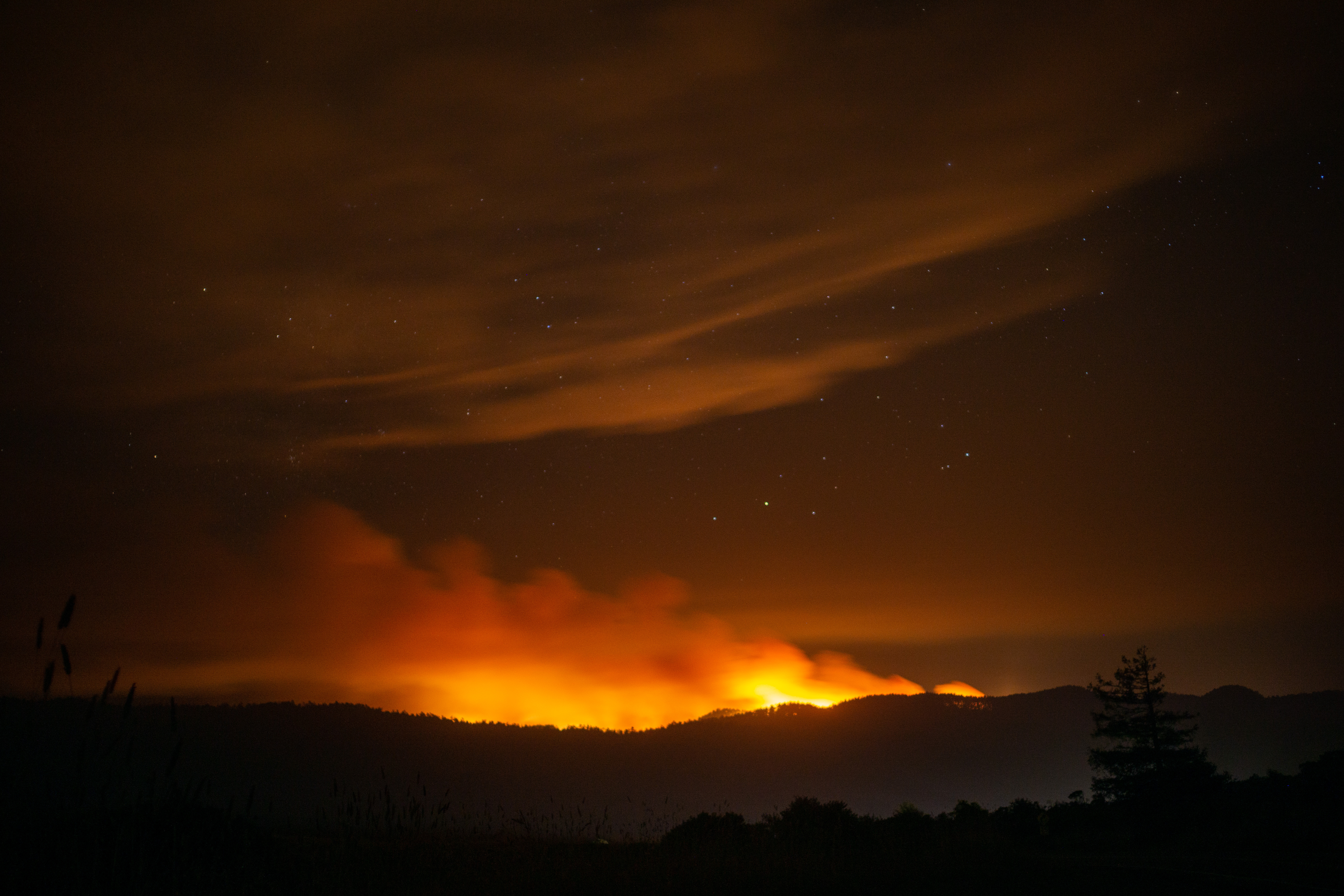 The Environmental Arts and Humanities Initiative hosted, in collaboration with the Spring Creek Project, the 11-week lecture series Lookout: Envisioning Futures with Wildfire. Students in the class "Environmental Arts and Humanities Methods" (EAH 411/511) attended the weekly lectures and later met with each speaker to talk about the art, science, and humanities methods they use to understand wildfire. The talks in the series broadcast live on Zoom from January 4 to March 15, 2022, and links to the recordings are available below.

In Lookout, we acknowledged that we are living in a new phase of the climate crisis. For decades it was conceivable that the dangers of a warming planet were on the distant horizon and that there was time to protect future generations from harm. But in recent years, scientists have given us clear warnings of immediate danger. Millions of people are struggling to survive and make sense of our quickly changing planet where heat domes, superstorms, historic droughts, and century floods are becoming the norm. ​​Wildfires, too, are burning at an astonishing scale—from Algeria to Siberia, from the wetland marshes of the Brazilian Pantanal to the foothills of Athens and the shores of Lake Tahoe.

The era of a solo ranger watching for smoke from a fire lookout tower is over. We are all called to be on the lookout now. Whether you live on the frontlines of wildfire, in the constantly shifting plume of toxic smoke, or care deeply for the people, animals, and places that are affected by fire, we invite you watch the lectures and explore how we are shaping this era of megafires and how it is shaping us.

The lecture series scans the horizon for the ideas and stories that can guide us through this critical and disorienting time. We invited speakers who offer perspectives from across the arts, humanities, and environmental sciences to think about questions like: What can we learn about transformation from fire’s destructive and creative force? How should we live differently, both with each other and on the planet, in this era of wildfires? How can we honor fire as an ancient, rejuvenating element while also honoring all that has been lost to wildfire?

"Art on Fire"
Watch this lecture

"The Wild after Wildfire"
Watch this lecture
Additional co-sponsors: OSU's School of Writing, Literature, and Film

"Writing for Youth: Building Pathways to a More Sustainable and Inclusive Future"
A recording of this lecture is not available
Additional co-sponsors: Corvallis-Benton County Public Library, Grass Roots Books & Music, and OSU's School of Writing, Literature, and Film

"It Takes a Village: Responding to Wildfire with Theatre and Collaboration"
Watch this lecture

Learn More About the Speakers

Julie Comnick's paintings and drawings engage the pictorial languages of representation and narration to pose questions about social circumstances and practices. Her project Ashes to Ashes is a series of drawings depicting 14 significant Arizona wildfires from 1990 to the present, rendered with charcoal samples personally collected from each fire site. This project is in conjunction with Fires of Change, a partnership between the arts and sciences, sponsored by the Southwest Fire Science Consortium, Landscape Conservation Initiative, and Flagstaff Arts Council with funding from the National Endowment for the Arts. Her exhibition record includes solo shows nationally at contemporary venues including LIC Factory, NYC; Hardesty Arts Center, Tulsa, OK; Mesa Contemporary Arts Museum, Mesa, AZ; The Gallery at Flashpoint, Washington, DC; Zg Gallery, Chicago, IL; and Creative Arts Workshop, New Haven, CT; group exhibitions internationally; and reviews in prominent publications. Her work has been supported by grants from the Arizona Commission on the Arts.

Christine Eriksen is a senior researcher with the Risk and Resilience Team at the Center for Security Studies (CSS) at the Swiss Federal Institute for Technology (aka ETH Zurich). With a particular interest in social dimensions of disasters, her widely published and award-winning research has focused on case studies in multiple countries and continents, including Australia, North America, Europe, and Africa. Christine gained international research recognition by bringing human geography, social justice, and environmental hazards into dialogue. She is the author of two books and over 75 articles and book chapters, which examine social vulnerability and risk adaptation in the context of environmental history, cultural norms, and political agendas. Prior to joining the CSS in August 2020, Christine worked for 13 years as a social scientist at the University of Wollongong, Australia. She holds a PhD in Human Geography from the University of Wollongong, Australia, and is co-author of the book Alliances in the Anthropocene: Fire, Plants, and People.

Molly Fisk is a poet, radio commentator, life coach, writing teacher, painter, mentor, and speaker. She is the author of four collections of poems and three compilations of essays/commentary. She served as Poet Laureate of Nevada County, California, from 2017 to 2019. She is the editor of California Fire & Water: A Climate Crisis Anthology, a project funded by a fellowship from the Academy of American Poets. Fisk created this project to teach kids across California to write poems about the climate crisis as a way to process their feelings about it. The anthology brings together selections from these youth poets, as well as poems by writers including Brenda Hillman, Danusha Lameris, Ellen Bass, Gary Snyder, Indigo Moor, Jane Hirsfield, Juan Felipe Herrera, Kim Addonizio, Kim Shuck, Lee Herrick, and Marcelo Hernandez Castillo.

Bryan David Griffith explores profound issues using simple forms and materials in unexpected ways. An interdisciplinary artist, he works across multiple media and learns or invents new techniques as needed to convey the concepts in each body of work. Griffith earned a degree in engineering and worked for a leading management consulting firm before he resigned to follow his conscience. He bought an old van to live out of as he toured the country, struggling to build a new career as an artist. When Griffith's van broke down in Flagstaff, Arizona, he fell in love with the town—and then his wife, Tasha—and never left. In 2016, Griffith won the Flagstaff Arts Council's Viola Award and the Phoenix Art Museum's Artist Grant for his work on wildfire. His work is held in a number of permanent collections including the Museum of Fine Arts Houston, University of Michigan Museum of Art, Center for Creative Photography, and Fort Wayne Museum of Art. His recent solo exhibitions include the Fresno Art Museum, Mesa Contemporary Arts Museum, Griffin Museum of Photography, and Coconino Center for the Arts. His exhibition Rethinking Fire is on view at the High Desert Museum until January 9, 2022.

Tim Ingalsbee is the executive director of Firefighters United for Safety, Ethics & Ecology. Tim started his fire career as a wildland firefighter for both the U.S. Forest Service and National Park Service, and is now a certified  senior wildland fire ecologist. He earned his PhD in environmental sociology with a graduate certificate in nonprofit management from the University of Oregon where he is also an adjunct Instructor and Faculty Research Associate. He was named Oregon's Conservationist of the Year in 1993.

Maya R. Khosla is a wildlife biologist, writer, and filmmaker focusing on forest biodiversity with a special focus on the wild after wildfire in intact forests. She served as Sonoma County Poet Laureate (2018- 2020), bringing Sonoma’s communities together through poetry gatherings and field walks after the 2017 fires. Sonoma County Conservation Council selected her as one of the 2020 Environmentalists of the Year. Her books include All the Fires of Wind and Light (2020 PEN Oakland/Josephine Miles Literary Award), Keel Bone (Dorothy Brunsman Poetry Prize), and Web of Water: Life in Redwood Creek. Her writing has been featured in documentary films including the award-winning Village of Dust, City of Water, about the water crises in rural India.

Jaime Lowe was born and raised in California. Her book Breathing Fire: Female Inmate Firefighters on the Front Lines of California's Wildfires weaves the underlying catastrophes of climate change, economic disparity, and historical injustice. She is also the author of Mental, a memoir about lithium and bipolar disorder, and Digging for Dirt: The Life and Death of ODB, a biography of Ol' Dirty Bastard. She is a frequent contributor to the New York Times magazine and other national and international publications. Lowe has contributed to This American Life and Radiolab, and has been featured on NPR and WNYC numerous times. She is a MacDowell and Logan Nonfiction fellow.

A native of Southern California, Stuart Palley’s work focuses on the intersection of humankind and nature, technology and hubris, and the temporal nature of the human-made world. His work also looks at modern society's impact on the environment. Stuart is interested in documenting the planet's changing climate and humankind's interaction with the vanguard of those changes. He has previously worked on water issues at the Salton Sea in California's desert. His recent work on wildfires, Terra Flamma: Wildfires at Night, focuses on documenting the most acute effect of drought in California, wildfire through long exposure images at night. Over the past eight years Stuart has photographed over 100 wildfires in the state. Recently his work was published as part of National Geographic's April 2021 cover issue on air pollution. He has formal wildland fire training and contracts directly with the United State Forest Service to assist with documenting megafires for the public record when not on editorial assignment. He also frequently speaks on his work to general audiences and fellow journalists for wildfire safety training and best practices. His work is held in various private art collections and is currently on display at the California Museum of Photography as a component of the Facing Fire exhibition. His forthcoming memoir Into the Inferno: A Photographer's Journey into California's Megafires and Fallout will be released in April 2022.

Stephen J. Pyne is currently a writer, urban farmer, and emeritus professor at Arizona State University. In a former life he spent 15 seasons with the North Rim Longshots at Grand Canyon National Park, and another three seasons writing fire plans for the National Park Service. Most of his books deal with fire through popular introductions, textbooks, a memoir, and histories including a resurvey of the American fire scene with Between Two Fires: A Fire History of Contemporary America and To the Last Smoke, a series of regional fire surveys. His most recent book is The Pyrocene: How We Created a Fire Age, and What Happens Next.

Jewell Parker Rhodes is a New York Times bestselling and award-winning educator and writer for both youth and adults. She is the Virginia G. Piper Endowed Chair at Arizona State University and the Founding Director of the Virginia G. Piper Center for Creative Writing. Through her award-winning novels (Ninth Ward, Bayou Magic) and most recent book, Paradise on Fire, Rhodes examines the impact of environmental disasters through fiction and the consequences of inequitable access to nature.

Margo Robbins is the co-founder and executive director of the Cultural Fire Management Council. She is also a co-lead and advisor for the Indigenous People's Burn Network. She graduated from Humboldt State University in 1987. Margo comes from the traditional Yurok village of Morek, and is an enrolled member of the Yurok Tribe. She gathers and prepares traditional food and medicine, is a basket weaver, and regalia maker. She is also the Indian Education Director for the Klamath-Trinity Joint Unified School district, a mom, and a grandma.

Learn More About the Hosts and Co-Sponsors

Lookout: Envisioning Futures with Wildfire
A lecture series about living with wildfire.

Art-Science Fellowship for OSU Students
Explore the intersection of the arts and sciences with this one-year fellowship.

Steps and Strikes
EAH Gradaute Shane Scopatz talks about his film and how art is "uniquely suited to envision a world of ecological flourishing and justice."