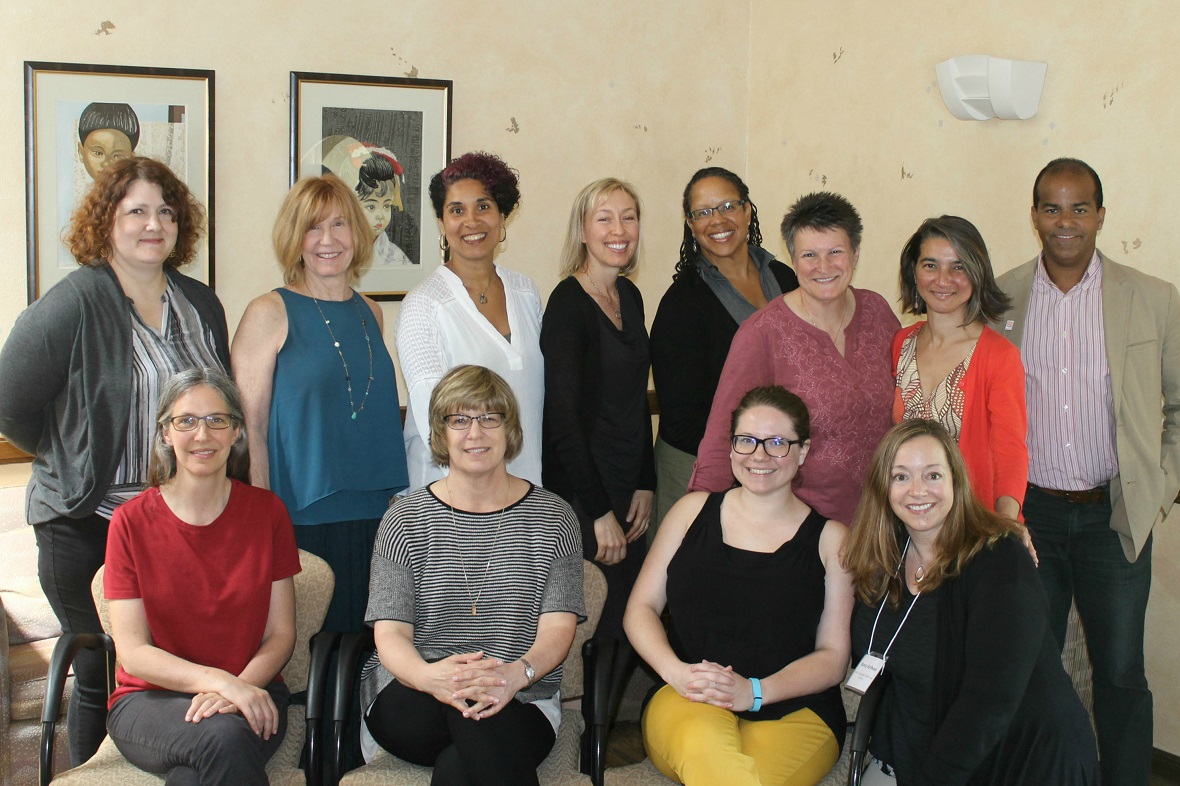 For nearly five years, Oregon State University has been home to OREGON STATE ADVANCE, a project of the National Science Foundation’s Institutional Transformation (IT) grant. The project brings together an interdisciplinary group of principal investigators, who have used a systems of oppression framework to nudge OSU toward greater inclusion, equity, and social justice, especially for faculty women in STEM disciplines. The centerpiece of the program is a two-week summer seminar for senior leadership.

Dr. Susan Shaw, professor in the Women, Gender, and Sexuality Studies Program is a co-principal investigator for ADVANCE, along with Dr. Nana Osei-Kofi, associate professor also in the WGSS program and the director of OSU’s

DPD program, who is a senior personnel for ADVANCE. With their background in WGSS, they believe in broadening the focus of ADVANCE to create conversations around intersectionality, drawing from systems of oppression theories, improving things for the diversity of marginalized people and working to improve policies that are deeply embedded in institution. OSU’s Difference, Power and Discrimination Program has also been a central part of ADVANCE from the beginning.

The inaugural issue of The ADVANCE Journal was also published earlier this year. Along with Dr. Shaw, who is the co-editor of the journal, WGSS professor Dr. Janet Lee, is co-editor and an internal advisory council member for ADVANCE. The team was also featured in The Lancet’s special issue recently with their article titled “Advancing Women in Academic STEM: Encouraging Institutional Transformation through a Summer Seminar for Administrators and Faculty.”

Dr. Shaw and Dr. Osei-Kofi share more about the program with us.

What are the perspectives you take into this type of work with your extensive background in women, gender and sexuality studies?

Shaw: There is this literature called sense-making that says that, "Institutional change is a little easier and happens a little better if people understand why you want them to change in the ways that you do.” Part of what we are trying to do with the seminar is to help all of these people understand gender and race and sexual identity and social class and how those things work in institutions so that they'll understand why they need to change. We draw from the literature of systems of oppression and and we use systems of change theory.

Osei-Kofi: The way that this program is structured allows for an approach that is very attentive to the idea that representation is not enough, because it does so much to go beyond just numbers.

Shaw: We don’t just focus on representation but we talk about things like climate and culture and institutional barriers. You could go and hire a bunch of women but if they are miserable and they are mistreated and they experience discrimination, we haven't accomplished anything simply by adding more women.

What connection do you see between institutional culture and discrimination?

Osei-Kofi: It’s because a larger society in which we live and the ways in which gender functions, we are simply marrying that, we are both marrying it from the way that society looks and we are also reproducing it to do the work that we do and how we operate in our day to day.

Shaw: We have so many of the STEM disciplines... liberal arts is a feminized set of disciplines and so what we see is that part of the culture is that feminized disciplines also get less money, less support, less value, and I think part of what was unique about this project is the ways we try to bridge those different units and cultures. Because I think in liberal arts we are at least more attentive, I don't know if we are terribly more successful in actually doing anything about it but at least we are more attentive to these issues. and so this project really has been liberal arts and STEM faculty and administrators working together.

Is liberal arts as field more accepting of women necessarily?

Shaw: The national Philosophy association had to apologize publicly for its sexism. Certainly there have traditionally been more women in a lot of liberal arts disciplines but I don't know that they've always been treated better.

Osei-Kofi: You could also even argue that ethnic studies and women's studies are certainly not part of the traditional liberal arts, so if you understand the discipline to be the cannon, then we are still dealing with white men as the authorities, as the knowers, as those who construct knowledge. In a very traditional sense even if we have more women in certain disciplines if you are not doing anything more than the cannon or if the cannon is sort of what is dominant then it is still male-dominated reality.

Studies have shown that bias is already bad for women in STEM but it is much worse for women of color. How does ADVANCE address this issue? Do you have programs specifically targeting women of color?

Shaw: We address it in the seminar, we talk about how these different phenomena are shaped by the intersection of race and gender and sexual identity. As people are building their action plans we are hoping that they are being attentive to that, that they are thinking about how do these hiring practices potentially disadvantage women of color applicants; or how is implicit bias playing in the way that we distribute lab spaces and graduate research assistance and teaching assignments. We talk about the ways that people get evaluated differently. We talked about research that showed how CV's get sent out to academic departments, it is the same CV but it might have a different name, a man’s name or a woman's name, or a name that is sort of ethnic sounding, as opposed to a white-sounding name.Not surprisingly, the white male is more likely to be hired and to get a higher initial salary offering. The seminar is trying to help participants who are going to be in those positions making decisions about who to hire, who to promote, to be aware.

Harvard Business Review published a study on women in STEM: the 5 biases pushing women out of STEM. It said that women who encounter discrimination in early stages tend to distance themselves from other women. What do you think of this type of conflict and do you think that it is a reason for women who end up competing more with other women in the work environment?

Shaw: If you are the only woman in your department there is this pressure to fit in. I saw this in seminary, because we were the first group of women to come through. Some of my colleagues wanted to be pastors and preachers ..... it was the 80's so they wore their dress suits with their A-line skirts and their blouses with bow ties, because that's the only way that they had to fit in. That has changed now because these generations have other models. I think that happened some in STEM because I think it would be very difficult to be in an environment and feel those kinds of pressures.

The studies we talked about also suggested ways forward, like what if we had an objective approach to measure biases within institutions, and have bias interrupters in place, do you have these conversations in your seminar and what are some ways forward?

Shaw: We in the seminar do talk about bias interrupters, about who does the housework of the institution, who takes the notes, who remembers to get a card for the secretary, we look at the service component of what goes on and sort of imagine how do we equitably distribute and reward service.

Osei-Kofi: If the outcome is a biased outcome then we have a problem whether it was due to implicit or explicit bias. There is a way in which, I am not sure, being aware of explicit bias is good or can be positive but if we were, I am not sure what measuring necessarily would do except point out how horrible things are. I think if we can look at the way things are, to say if there are no women in a discipline, then we already know that data tells us there is a problem. And that's what we have to act on. But there is something good to knowing where you are in order to know, one way you need to go and when you get there. I am surprised at how much of an issue that is actually where institutions don't have even just demographic data of say faculty or students. So when they say they want become more diverse or more equitable, more socially just, how are they going to know when that happens, when they don't know where they are starting? I think that first piece of having a deep understanding of your own institutional location, is really important to being able to do the work.

Shaw: OSU has a climate survey that's done every two years, but it’s so big picture. I don't know that it’s all that helpful because I always worry about filling it out. My happiness waters down how bad things are in other places. I think that we need to have those ways to dig down not to measure the bias but to see what are these sort of outcomes in the ways, not just whether or not people are being hired but the ways they are being treated, the ways they are being mentored or not, the ways they are being advanced or not and those numbers I think will tell us something. Also the affective component for people is how they feel, do they dread coming into work, do they feel terrible when they leave at the end of the day? We don't have those mechanisms. What are people’s subjective experiences?

What are some of the milestones that ADVANCE achieved?

Shaw: One of the things that we've done that's unique is we had an ADVANCE seminar for university relations and marketing. They changed somebody's position description, so one of their people has a quarter of her position now to do this kind of work. They had me come be the keynote at their most recent brand symposium to talk about systems of oppression. They are working on an article for the journal with us. There is still work to be done but I think we are the only institution in ADVANCE so far that has really done that with the marketing wing of the university. A lot of people who took the advance seminar have now moved into leadership positions in the university.

In the summer, Oregon State ADVANCE is organizing the Train-the-Trainer seminar focusing on the operations of gender, race/ethnicity, ability, social class, sexual identity, and religious difference in the context of an institution of higher education, with a particular focus on STEM disciplines, for OSU and non-OSU folks.

The seminar will focus on both the theoretical underpinnings of the seminar and the pedagogical methods used to deliver the content such as large and small group discussions, short videos, Theatre of the Oppressed exercises, skills practices, challenging questions, and personal storytelling. There will be time for reflecting and debriefing, and participants will create an action plan focused on delivering ADVANCE seminar content in their sphere of influence.

Several other folks in the WGSS program have been deeply committed to institutional transformation in various capacities and have worked with the project, including Kali Furman, PhD candidate who is a graduate research assistant, Dr. Qwo-Li Driskill, associate professor and director of graduate studies for WGSS who has been a seminar co-facilitator and guest speaker, Dr. Ronald Mize, WGSS associate professor, has also co-facilitated a seminar and Kryn Freehling-Burton, instructor has been a guest speaker.