On a chilly January morning, in the hour or so before classes start at Salem’s Waldo Middle School, children arrive on foot or on bikes in twos and threes from the surrounding neighborhood. Parents headed for work drop off their kids in the predawn darkness.

The students scurry in and grab prime sitting or standing spots in the warm, well-lit main hallway, where they wait for school to start. Many of them have arrived hungry and they head to the cafeteria for breakfast.

But these days that’s far from the middle school’s most famous connection to OSU. 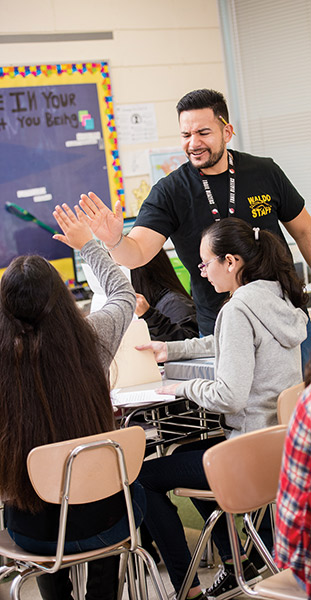 As students chat and study and wait for the start of the school day, attendance clerks and other support staff are already at work in the main office, where an oversized facsimile of a check for $25,000 is taped across some desks. It’s there to make sure no one forgets that not only is this the home of the Waldo Mustangs, it is the professional home of teacher Ricardo Larios, named in January by the Milken Foundation as Oregon’s outstanding educator.

A 2005 OSU graduate in ethnic studies, Larios is the son of migrant farmworkers. He was the first member of his family born in the U.S. and the first to go to any kind of college when he started at Salem’s Chemeketa Community College. The Milken Educator Awards, more than 2,600 of which have been given across the nation since 1987, are presented in suspenseful, well-orchestrated assemblies that often draw TV news crews. Larios was this year’s only winner among Oregon’s 28,000 public school teachers, and video from the presentation makes it clear that he was stunned. Afterward, via iPhone, he had trouble convincing his wife Mayra of what had just happened.

A supremely confident teacher with a profoundly humble soul, Ricardo Larios says his decision to be an educator took its time to crystallize. Partly because of work he did at OSU with mentors like philosophy and ethnic studies professor Joseph Orosco, he has come to understand his decision to seek an education and redefine himself had its roots in his parents’ difficult but hopeful migration from Mexico to start a better life, at first by picking fruit in the orchards around Toppenish, Wash., which is where Ricardo was born, before they eventually settled in the Salem area.

“I did not take school seriously when I was young,” he says. “There were some lost years. I knew more about what I didn’t want than what I wanted. When I started to go to college, I didn’t know exactly what I was doing or where I was going, but like my parents when they left Mexico, I knew I wanted something better.

“By the time I came to Oregon State, it was like, ‘I just gotta get there. Then I’ll work it out.’ It was like this was my migration.” Slowly, as he studied and did some work with bilingual programs in public schools, he learned that he liked teaching and seemed to be good at it. He earned a master’s in education in 2007 from Willamette University in Salem. While there he did his student teaching at Waldo and then, as he puts it, “I just didn’t leave.”

To read more, visit the Spring 2016 issue of The Oregon Stater: http://bit.ly/stater_larios