When Speech Communication major Alison Blazer realized her passion wasn’t being fully explored, she searched for opportunities to expand her communication knowledge and skills by finding other students with similar interests. “I looked for a way to become more involved with COMM on campus because I really loved it and I wanted to do more than just my classes.”

She teamed up with Monica Racicot, a 2012 Speech Communication graduate, and discovered a dormant “COMM Club” that needed a group of motivated students to revive it. Blazer and Racicot began to get other students in their major excited about the group, and started having COMM Club meetings to plan what they could do. There were a handful of supportive founding members, but Blazer says, “It wasn’t long before Monica and I realized that people didn’t take ‘COMM Club’ seriously – they would almost laugh it off. You know, when you dedicate your time to something that’s not a good feeling.”

But they stayed focused. “We really wanted to give COMM students not only another place to interact and talk about the discipline but would also benefit them in other ways,” Blazer says. They were helped along by rhetoric professor Dr. Trisha Goodnow, who told them about the potential opportunity for the club to morph into an official honor society chapter sponsored by the National Communication Association (NCA). Blazer and Racicot were game.

Together, Goodnow, Blazer, Racicot, and the other founding members established Oregon State University’s official chapter of Lambda Pi Eta in the spring of 2012 when they crafted their constitution and formed an officer board. There is an annual induction in the spring for official national members who meet the official requirements, which gives them national lifetime Lambda Pi Eta membership. Blazer and Racicot also declared chapter member requirements so that students who don’t meet the GPA or credit requirements yet can still enjoy all the benefits of the chapter as members by participating in chapter discussions and events. “We’re always looking for new members,” Blazer says, with officer positions opening up as members graduate as well.

Their planning, organizing, and hard work has paid off. Oregon State’s official chapter of Lambda Pi Eta, a.k.a. COMM Club, was awarded the Rookie Chapter of the Year for 2012-2013 among 700 chapters nationwide, while Rookie Advisor of the Year was awarded to the chapter’s faculty advisor and rhetoric professor, Dr. Trischa Goodnow. In November, the 2012-2013 chapter president Megan Bauer and 2012-2013 vice president and current chapter president Alison Blazer, along with Dr. Goodnow, attended the National Communication Association’s annual communication conference in Washington, D.C. to accept these awards. They carry a sense of accomplishment and excitement, as president Alison Blazer says, “we’re so glad somebody recognized that we had been working hard to fulfill all the goals of Lambda Pi Eta our first years on campus.” 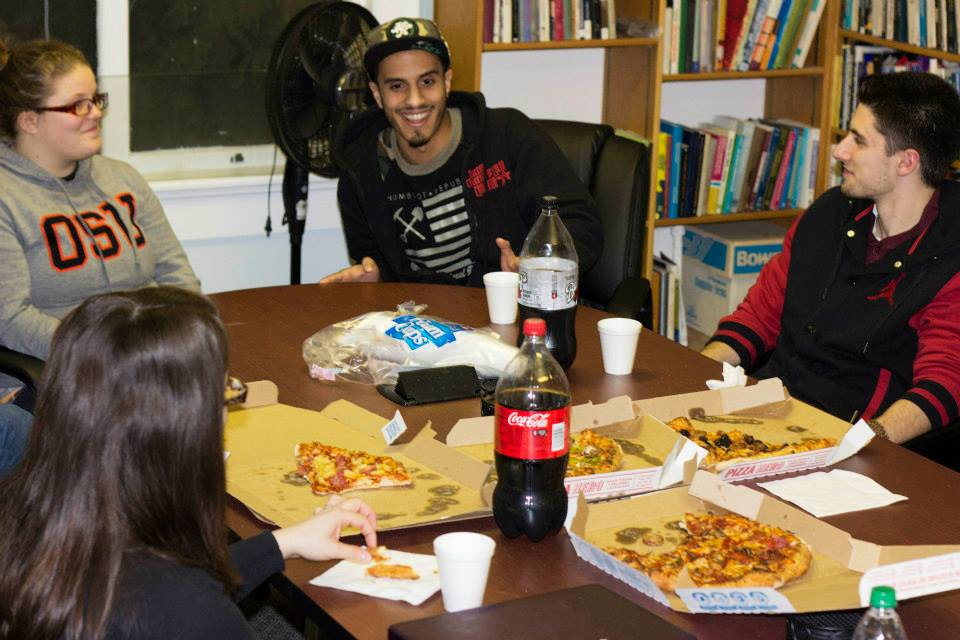 Apart from the chapter’s annual spring conference and induction, other events, and philanthropic activities, the hour-long weekly meetings consist of Communication in Context discussions in Shepard Hall. “We wanted a place to have these awesome, intricate discussions that happen in class, but then class is over. We can choose the topics, so often we choose things relevant to current events and pop culture.” Discussions have included the commercialization of Valentines’ Day, Miley Cyrus’ movement, visual rhetoric of greeting cards, climate change communication, and the effects of facial paralysis on interpersonal communication. “Our chapter epitomizes the diverse attitudes that exist within the communication discipline and it makes for interesting discussions on a weekly basis.”

Blazer says that she has undoubtedly gained skills she can reference to future graduate schools and employers through the process of creating OSU’s Lambda Pi Eta chapter, like dealing with all types of people, mediating discussions, planning the chapter’s own small conference and attending a huge national conference. As a senior graduating June, 2014, Blazer enjoyed the opportunities the national conference gave her to explore her options for graduate school by meeting many professors of communication from across the country. But this isn’t even close to all that she’s gained from her participation and devotion to the group. “I’ve found some of my best friends through Lambda Pi Eta,” which gives communication students an outlet to realize their common interests as opposed to just talking briefly in their classes. When asked if she has any advice for other students who might be considering joining or forming a group on campus she said: “Beyond the recognition, if it’s something that you love then make it happen. I don’t even see Lambda Pi Eta as the resume-builder that I know it is; it’s just that it’s been fun. I would have kept doing it even if it was COMM Club.”

Find or create a student organization on campus.