Now Playing: SWLF at The Darkside 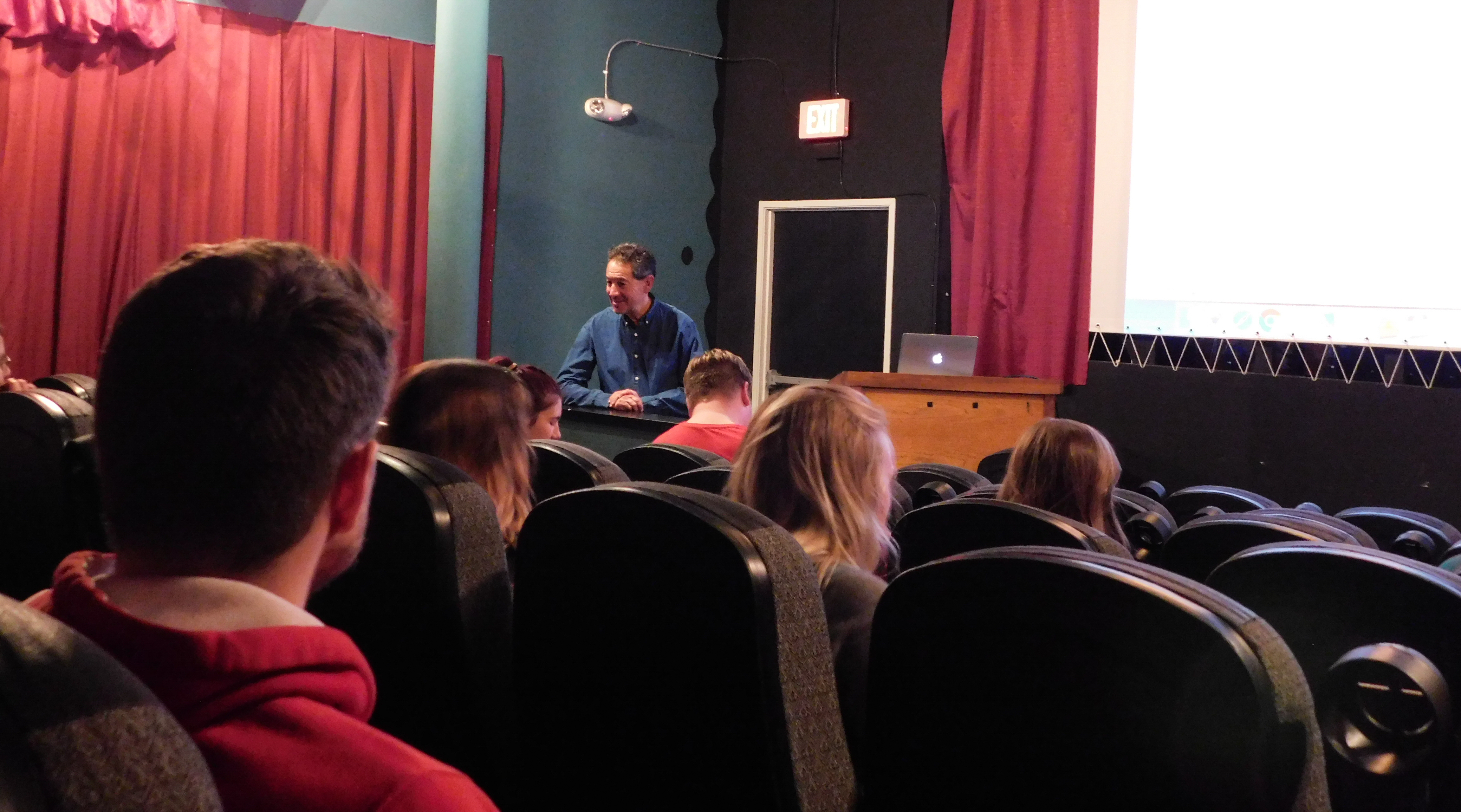 The Darkside Cinema is small, but it thinks big—maybe bigger than those big-box competitors on the other side of town.

You won’t find 12 screening rooms with enormous foamy chairs and seat-cup holders straight out of Wall-E. And you won’t be choosing from a roster of Hollywood blockbusters like Boss Baby and The Lost City of Z, or striding across acres of off-gassing carpet with patterns reminiscent of The Shining. You won’t stick your straw into a plastic chalice of Coca-Cola products starting at $5.09, or dabble your fingers in a bag of industrial popcorn for $7. And the cost of your ticket won’t come buzzing in at $10.50.

Like The Darkside’s motto says: We Suck Less. Every Day. For 19 Years!

Founded by proprietor Paul Turner in 2005, The Darkside has clearly paid its dues to become Corvallis’s premier independent theater. Instead of boasting an impersonal atmosphere, predictable plotlines and canned snacks, Turner has dedicated his life to becoming a theater proprietor who knows your name when you visit, can offer something to eat that’s actually good for you, and brings you riveting, alternative cinema for the unbeatable price of $9 per ticket ($7 if you come before 6 p.m.). And every ticket you purchase helps support a theater that strives to serve all facets of the community, bringing not only an impressive list of critically-acclaimed films, but a distinguished roster of guest speakers, special events, and festivals such as The Crossroads International Film Festival and The Corvallis Queer Film Festival.

It gets better, though.

These days, if you are one of the lucky students enrolled in SWLF’s rapidly growing film studies program, you push open The Darkside’s front doors every time you come to class—thanks to a groundbreaking town-and-gown collaboration between The Darkside and OSU.

“I am teaching my second class there this term,” explained Jon Lewis, Distinguished OSU Professor and Film Studies Coordinator. “I taught a class on the horror film there last term, and I’m teaching a class on teen films and youth culture right now.

According to Lewis, instructing classes at The Darkside has numerous advantages over teaching in campus classrooms—not the least of which is offering students a dedicated space and expert staff strictly devoted to film.   “The people at The Darkside really care about how everything comes off,” Lewis said. “The sound is perfect, everything works great. But the real positive part for me is to provide film students with their own film-watching space. How cool is it to have a real movie theater as your classroom? My biggest hope is that one day in the future, most of our film classes take place at The Darkside—and if you’re majoring in film at OSU, you’ll have your own super-cool space.”

SWLF Director Peter Betjemann was equally enthusiastic; he thoroughly enjoyed working with Lewis to navigate the complicated logistics of hosting university classes at a community theater.

“The collaboration between SWLF and The Darkside offers film students a chance to experience – and, more importantly, to analyze – the full range of cinematic craft,” Betjemann observed. “Unobstructed sight lines, surround sound and outstanding projectors present opportunities for critical viewing and listening that a conventional classroom cannot replicate. We’re delighted that such a deep educational experience comes through a town-gown collaboration, and are grateful to the Darkside for so generously extending their facilities to us. Everybody knows independent cinema and critical thinking go together—but this partnership makes that connection wonderfully vivid.”  Assistant Professor of Film Studies, Mila Zuo, who is also a filmmaker of international repute, has taken part in several events at The Darkside since she moved to Corvallis. Zuo praised the value of The Darkside for film screenings and as a site for classes.

“I was one of the featured filmmakers in the ‘Illuminated: Asian American Women Film Festival,’ along with Patricia Sakurai and Masami Kawai,” Zuo recalled. “The event was sponsored by OSU’s Asian & Pacific Cultural Center during Winter term. The organizers were looking at different venues, and I suggested The Darkside. It was a completely packed theater (they had to bring in extra chairs) and we had a nice long Q&A afterward. It was great to see the works of Patricia and Masami on the big screen and to share my short film, Carnal Orient, with the community.”

Zuo endorsed The Darkside as a venue for private screenings with Q&A sessions, such as the recent screening of the Raoul Peck-directed James Baldwin documentary, I am Not Your Negro, which wasa multi-departmental event sponsored by the School of History, Philosophy and Religion and the LBH Black Cultural Center. She also cited her collaborations with OSU Associate Professor Sebastian Heiduschke, who worked with her to select Asian films for The Darkside’s annual International Film Festival.

According to Lewis, hosting film classes in an engaging venue is crucial for numerous reasons, not the least because students gain a sense of belonging when they call a working theater “home base.”

“Because OSU is a big state university, there needs to be opportunities for students to feel special,” Lewis explained, stating that he enjoys “the whole vibe” of The Darkside.

It was this blend of convivial atmosphere and Turner’s devotion to film that inspired Lewis to begin organizing special screenings and guest speakers at The Darkside in years past. But this expanded role of The Darkside in the overall education process is exemplary, as it draws students more directly into the cultural locus of Corvallis—and their participation in film studies—in an unprecedented way.  “The Carmike would never give us a theater for any purpose,” Lewis chuckled. “But the Darkside is always there when we propose to do something. Paul Turner’s simply a part of the community in a way the Carmike was not. You always get that sense of community at The Darkside.”

Zuo also sees educational benefits to holding events at the Darkside and drawing students deeper into the local community.

“First, it allows students to further explore Corvallis and to engage with the wider community,” Zuo noted. “Second, from my experience, Darkside seems to be the venue in town most equipped to handle different types of media. Moreover, because the environment was specifically designed for film viewing, it’s the most conducive space in which to engage with film and moving image media. Although you could technically show a film anywhere with a screen and sound, there’s nothing quite like screening a film in an actual theater. Perhaps it's the film purist in me, but I do think films are best seen in a space designed specifically for that intention.”

This intersection of community service and cross-cultural spirit is exactly what proprietor Turner (who also refers to himself as Le Grande Fromage), was seeking when he opened his theater’s doors in 2005. No stranger to theater entrepreneurship in the Willamette Valley, Turner’s first venture in cinemas was The Kuhn in Lebanon, which he managed and ran for a decade, even though he was up to his elbows in coursework at Linn-Benton Community College. After transferring to OSU in the mid-90s, where Turner worked at The Daily Barometer and majored in English (and took film studies classes with Lewis), Turner decided to open a cinema that would specialize in independent and foreign films. His first effort at such a venue, which opened in 1997, was The Avalon, a single-screen theater on the Corvallis waterfront—but Turner’s dream theater finally became a reality when he opened The Darkside Cinema in 2005. As his popular book, Prancing Lavender Bunnies and Other Stuff from the Darkside of Independent Cinema, explains, what Turner ultimately wanted to create was a theater that would “never take you for granted.”

Film buffs, who are rarely shy by nature, will tell anyone willing to listen that watching a film is a quintessentially social experience. If you’re new in town, the cinema is a good place to find refuge from the blues or alienation. If you’re in love, the picture show is perhaps the time-honored spot to bring a first date. But for every film aficionado, there’s that cherished moment of gabbing about a film, either over drinks or as the crowd spills into the street voicing their opinions—the moment Lewis refers to as “that wonderful sensation of talking about a film as you’re leaving the theater, or when you bump into a friend and talk about the film you just saw.”

Freindship, in fact, is the essence of what brought OSU and The Darkside together in the first place; indeed, Lewis cites friendship as the key ingredient of all his collaborations with Turner. And with his trademark indomitable panache, Turner recalls the days when he was Lewis’s student in film classes.

“I was [Jon’s] student 20 years ago and though it was a film class, he made me write well,” Turner reminisced. “The cutesy shit I was passing off to my other professors wasn’t flying with him and he gave me my first non-math B. Jon’s lack of latitude with me wasn’t about ego, it was about respecting film. We’ve been friends ever since.”

Above all, Turner and Lewis value their roles as integral members of a community—not merely the film community, but a community of families and friends.

“My time with Jon is more personal than academic,” Turner reflected. “My kids babysat his kids. We’d be at film festivals together. We’d meet for lunch. I’d go to parties at his house. He helped me when I became very ill and I helped him after he had a major car accident. I wish there was some scintillating tale I could unfurl for you about raising the consciousness of countless students. But, alas. It’s just a couple of middle-aged guys who happen to love film more than damn near anything else.”

Still, once he’s had his personal chuckle, Turner acknowledged that students gain an irreplaceable kind of experience from studying at The Darkside, an experience they just can't get in a classroom. According to him, “the cinematic experience” is just plain different in a theater. “Classrooms are very multifunctional, which dilutes each individual use,” Turner said. “The Darkside is pure cinema and that’s what [Jon and Mila] are teaching.”

Lewis also has many fond memories of bringing his own kids to Paul’s theater in Lebanon, early in the game.  “I remember when I used to bring my boys to The Kuhn,” John recalled. “Paul would put Guy and Adam up in the projection booth, and they’d sit up there feeling like VIPs, sitting on telephone books so they could see out the projection window and eat popcorn. And while they were watching, Paul and I would talk about stuff.”

It seems only natural that, years later, with his boys grown and off to college, Lewis is bringing a whole new generation of film buffs to The Darkside. What might that look like in the future? According to Lewis, “right now I have been teaching one class there per term [but] Mila will be teaching there in the fall, and I will teach some seminars there in winter and spring. It’s a perfect seminar space.”

For more information about The Darkside Theater, contact Paul Turner at (541) 908-2000. The Darkside Cinema is located at 215 SW 4th Street in Corvallis, Ore. For amusing anecdotes and additional observations on film and life, Turner’s blog at darksidecinema.com is an additional treat. His latest book, Prancing Lavender Bunnies and Other Stuff from the Darkside of Independent Cinema, is available in paperback on amazon.com.