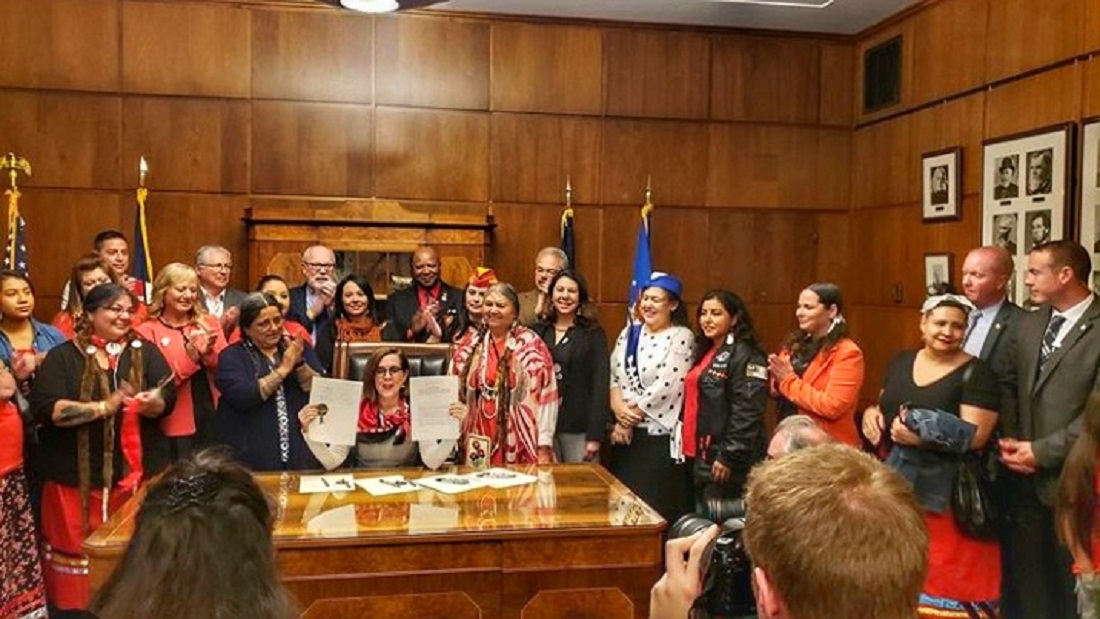 Oregon Gov. Kate Brown signed a bill on Thursday that will require state police to conduct closer investigations of missing and murdered Indigenous women. Luhui Whitebear, PhD Candidate in the Women, Gender and Sexuality Studies program at Oregon State University testified for the bill and has been involved in advocacy work around Indigenous women in both academic and activist roles.

Whitebear has been working with Laura John, City of Portland’s Tribal Liaison, and Deborah Maytubee Denton-Shipman, founder of Missing and Murdered Indigenous People of the United States, among other people over the past year on advocacy and activism on Indigenous women. She has also been offering testimonies about the importance of this bill titled, “Relating to missing Native American women; and declaring an emergency,” and the impact it can make.

“What this bill is doing is looking at the different jurisdictions, federal, state and tribal law enforcement so that they can work together and share data. We actually don’t know how bad this problem is in Oregon,” Whitebear said.

The House Bill 2625 calls for more attention from the police and state toward Indigenous women, girls, and two-spirit people who are being murdered and going missing in both the United States and Canada. It also requires the state police to study ways of providing rapid response to cases, including those pending, of missing and murdered Native American women including Alaska Native women in Oregon. While conducting the study, the police department would  be required to meet with tribal and local law enforcement partners, federally recognized tribes and urban Indian organizations to identify hurdles in reporting cases.

This is the first step in a long process to help address the issue here in Oregon, Whitebear said and that it also helps set a precedent for other states. In April, a similar bill HB 1713 titled “Improving law enforcement response to missing and murdered Native American women,” was signed into law in Washington state.

The bill, which is now a law, is not limited to missing and murdered Indigenous women from federally recognized tribes. It is an inclusive bill and, “people that aren’t eligible for tribal enrollment, that are part of terminated or state tribes or indigenous women that may not identify with the tribes within the context of the US colonial borders would also be counted in this data,” Whitebear said. In her testimony before the Senate Judiciary Committee, Whitebear specifically advocated for attention to Indigenous trans women, who are often left out of conversations and activisms.

The Violence Against Women Act (VAWA), a national bill, is not including either one of those populations. “It (the HB 2625) is way more inclusive and that is exciting,” she said.

“Artists as human beings can increase awareness by breaking barriers around people’s minds,” says Iranian environmental artist and activist Naeemeh Naeemaei speaking at Oregon State University
Naeemaei spoke in detail about her environmental justice work, art, and lived experience in the U.S. and how they inform her work.

"Activism is in the conversations we have everyday," says WGSS scholar Rebecca Lambert
Lambert's research focuses on the effect of emotions on feminist anti-racist activism and coalition work.

We don't live 'in' the current system. It lives on top of us Indigenous people, says Luhui Whitebear, activist and PhD candidate in the WGSS program.
Whitebear talks about how activism and her work with tribal communities inspires and enriches her scholarship.