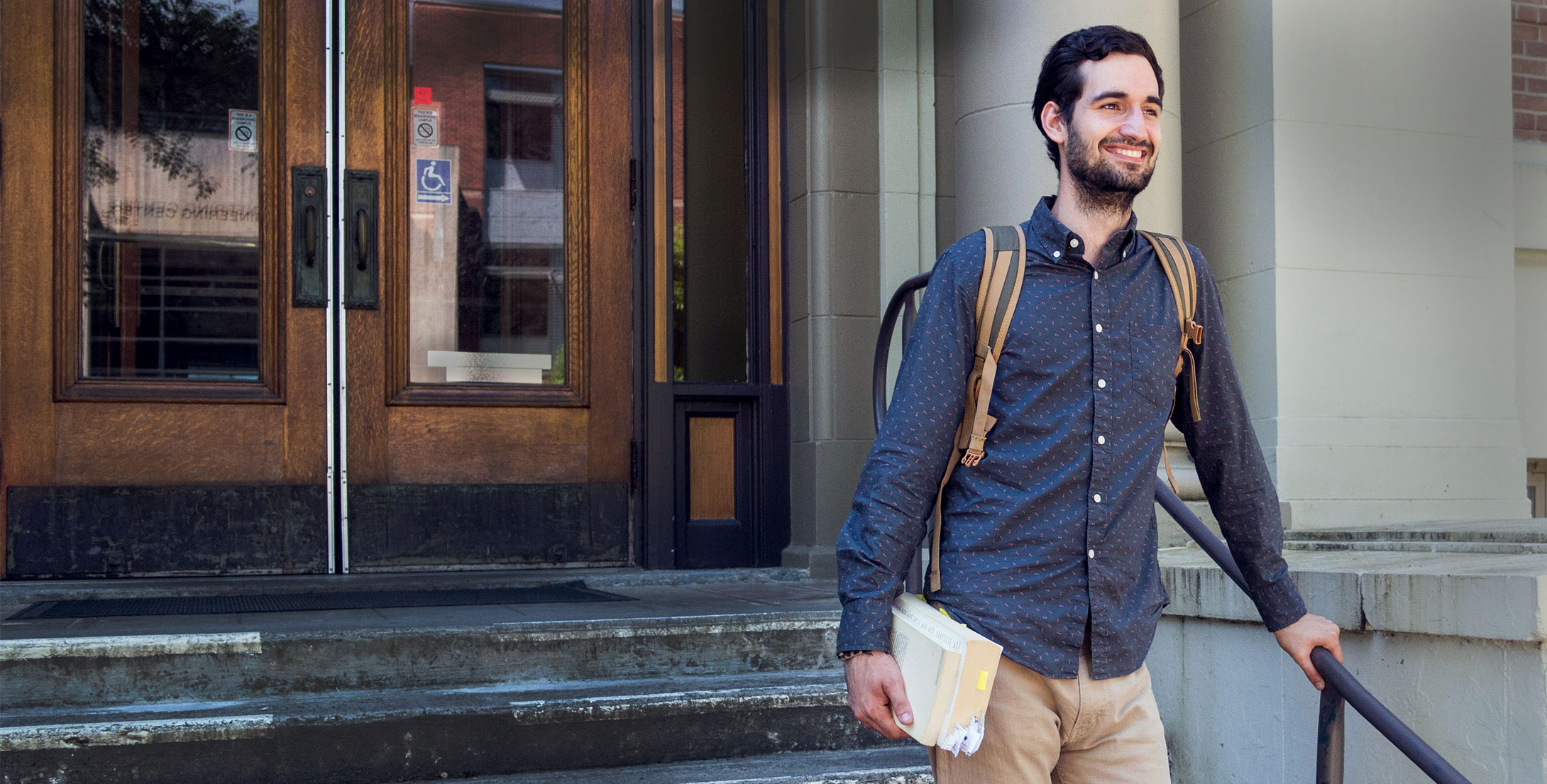 Jasen came to the US from his native Germany about four years ago as a high school exchange student. After high school he received a scholarship and entered into the degree partnership program at Linn Benton Community College. He later became a full-time student at OSU. Jasen is a committed environmentalist and has been very active in that movement.


What led you to major in Philosophy?

I was thinking about how I could be an agent of change, so I decide to study sociology. I thought, if I want to do anything, I should be able to understand society. I was looking for more depth in my classes, so I took “Political Philosophy” and “Pacifism, Just War, and Terrorism”. From the first day of class, I was very intrigued. I actually wanted to drop both of them, because the readings were very hard and as a second language English speaker, I was really concerned with my grades. I decided to stick it through, and retrospectively, that was one of the best decisions I have made.  After that term of philosophy classes I decided to add philosophy as my second major.

What has been your favorite course so far and why?

The Political Philosophy course with Dr. Joseph Orosco was very impactful. As a former political science major, I have always been interested in politics and history, and diving into the underlying ideologies that govern the political institutions that we see today. That was very intriguing to me. It was in this class that I finally saw the in-depth analysis that I missed in my political science and sociology classes.

How have philosophy courses help you see the world?

They help in questioning one’s own assumptions and basically things that we take as facts, and to think about alternatives. Also, I am very passionate about social justice, and so the courses really helped me to dive into the ideologies that govern those social justice discourses. It also helped me in understanding what justice (and also on the opposite side, what an injustice) might be. Additionally, what is a system of oppression, and how does that function? In terms of understanding my own place in the world, these courses really have helped me to make sense of my place in life. As a white male, I think that the courses helped me explore what my place in the social justice discourse or movement might be.

What are some extracurricular activities that you are involved in and what do you like about them?

Outside of the classroom, I have been able to get involved with ASAP, which stands for Allied Students for Another Politics. We are a group of student organizers that are concerned with all forms of oppression. Firstly, we try to challenge those oppressions but also create alternatives in the here and now at least in our own structures in the way we operate to overcome those systems of oppression.

I am also involved with SUPER, Students United for Palestinian Equal Rights. We are trying to raise awareness about the issues that impact Palestinian’s lives and the occupation. I have also been able to work with the administration here at OSU as a member of the university budgeting committee, which essentially drafts the budget for the university. I am one of the only students on the board and I am trying to provide the students perspective on mainly tuition issues as it impacts students, very specifically students of lower incomes, people of color, women, and just generally underrepresented groups of people here at OSU. That has been very impactful.

I think that my philosophy major has given me a good perspective on those kinds of endeavors. Such as, why we even need tuition in the first place? However, realizing that the system is the way it is, what type of perspectives can we provide, what can we do about it?

ASAP has been kind of like a safe haven for me. To be honest, as a philosophy major, an existential crisis is kind of an ongoing thing in your life, because that is what you study. ASAP has really helped me to ground myself with those existential questions in mind, but also to realize that these existential questions are valid, and that they need to be asked in the first place. I think that ASAP has always provided me with this ground to fall back on.