This spring, Assistant Professor of Biological and Ecological Engineering Chet Udell, accompanied by CLA guitar and music technology instructor Mike Gamble, performed a composition on an instrument that’s never been heard (or even seen) before — the spider harp.

The spider harp is unique in the world. But it’s much more than the haunting, layered melodies and harmonies that captured spectators in May.

Before the spider harp was conceived of as an instrument, it was created as a large-scale model of a spider’s orb web, with the aim of uncovering the mystery of how spiders sense vibrations in their webs with their feet.

It’s through these vibrations that spiders can tell who or what is in its web, whether it’s friend, foe or food.

The projects originator is Ross Hatton, Professor of Mechanical Engineering and Robotics at OSU. Hatton and his graduate student, Andrew Otto, are working in collaboration with biologists at the University of California, Berkeley, to give the world a clearer picture of how spiders use their senses to survive.

When Chet Udell heard about the project he introduced himself to Hatton. The two began collaborating on making the web into an instrument — which would not only improve its function for research, but would put more beauty into the world.

Here, Hatton, Otto and Udell talk about their roles in the project, and why it’s so inspiring to them.

I work at the interface of robotics with mathematics, physics and biology. I look at how mathematics and physics allows us to better understand biology, and how biology can help us come up with new ways of making robots that interact with the world.

We were already looking at how spiders’ senses worked, and how they understood the vibrations traveling through their webs. Then we realized that if we’d already built a large scale model to investigate this — complete with a robot spider — it lent itself naturally to be set up as an instrument.

Andrew Otto and Chet Udell have combined the essence of what will make a good instrument and the technical specifications they need for it. We had the basic results for the scientific piece, but had to refine the harp it to make it robust enough for a musical performance. Their work took the web to the next level.

It’s wonderful that Engineering and Liberal Arts supported the development of the musical aspects of this project. And it’s been gratifying to take the musical piece to the public. It ties together the beauty of the sciences in a way that anyone can appreciate. 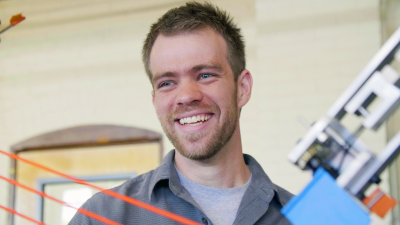 My role in this project has been to build the web out, so that we could better inform our research partners at Berkeley how spiders sense vibrations with their feet. These spiders don’t have good eyesight, they need to convert vibrations into information and situational awareness.

Our robot spider has tiny sensors on its feet that can measure vibrations. It can tell where something is vibrating on the web depending on how far away it is and where it’s coming from, the way spiders do in nature. So when we pluck a string on the web, we can measure which of the spiders legs react and how.

I’ve been working with Chet weekly for a year and a half to optimize it as an instrument, which gives us more fine-tuned data to provide our research partners. He’d try out different sounds and I’d improve accuracy, which has a lot to do with tension distribution.

This collaboration shows that anything can be an instrument, and that there are a lot of possibilities for bringing robotics into art. I’ve loved the interactions between engineering, biology, music and art. It gets people talking about the effort involved in making it work rather than just the performance. 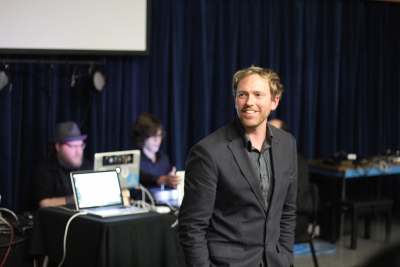 My Ph.D. research synthesized electrical engineering with music. In my work I look at taking an ordinary object and use technology, music and sound design to make it extra-ordinary.

The web is larger than life. It’s a presence. And we as humans have a generalized anxiety about arachnids. I was playing on all of these associations with the music I decided to make for it. It’s out of a dream — the idea of a giant spider web whose strands you can pluck and create gorgeous harmonies and melodies.

Andrew adjusted the web so I can create and sustain harmonies, and play over the top of them. We created a mode where I can pluck a string and the harmony or pitch persists. It lets me build up triads and chords. I can accompany myself.

It’s always interesting to look at technology and apply it in an artistic way. It reveals things about the technology you wouldn’t have considered, and vice versa. In spider harp, the music and the engineering coevolve, pushing the two disciplines in directions that neither may have explored on their own.