Steven M. Zielke, a professor of music who is widely recognized as a leader in choral studies, has been appointed as the first Patricia Valian Reser Professor of Music at Oregon State University. 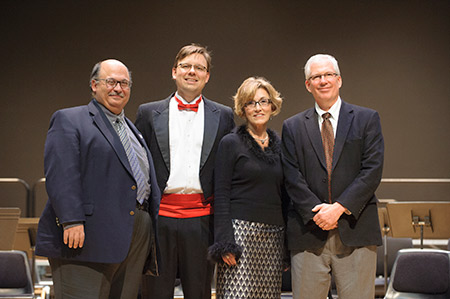 This endowed professorship was created by Pat Reser, an OSU alumna from the class of 1960, to advance the arts at Oregon State. Reser co-chairs The Campaign for OSU and is a trustee of both the OSU Foundation and university. The funds from this endowed professorship will provide Zielke with recurring discretionary funds to expand his academic efforts, the choral program and its students.

“Honoring Steven Zielke with this professorship is a tribute to his nationally recognized talent as a choral conductor, as well as his leadership in his profession,” said Lawrence Rodgers, dean of the College of Liberal Arts. “He is a gift to our community and the youth in our state.”

“I am incredibly honored by this recognition, which represents a new high point for my career,” said Zielke. “It’s such a great honor for our arts programs to have the support of such a visionary philanthropist as Pat Reser.”

Choirs under his direction have appeared at state, regional, and national conferences, as well as the Festival of Light in Bulgaria and the Prague Musica Ecumenica concert series.

Zielke has been an officer of the Oregon chapter of the American Choral Directors Association, the Oregon Music Educators Association and is a contributing editor to Walton Music, a longtime publisher of choral music. He is also the founder and music director of the Corvallis Repertory Singers, a semi-professional ensemble devoted to exemplary performances of the finest in choral literature. Additionally, he serves as the director of music at the First Congregational United Church of Christ in Corvallis.

The gift is part of The Campaign for OSU, the university’s first comprehensive fundraisin

g campaign. Guided by OSU’s strategic plan, the campaign has raised more than $970 million of its $1 billion goal, including more than $100 million for faculty positions, to provide opportunities for students, strengthen Oregon communities and conduct research that changes the world.