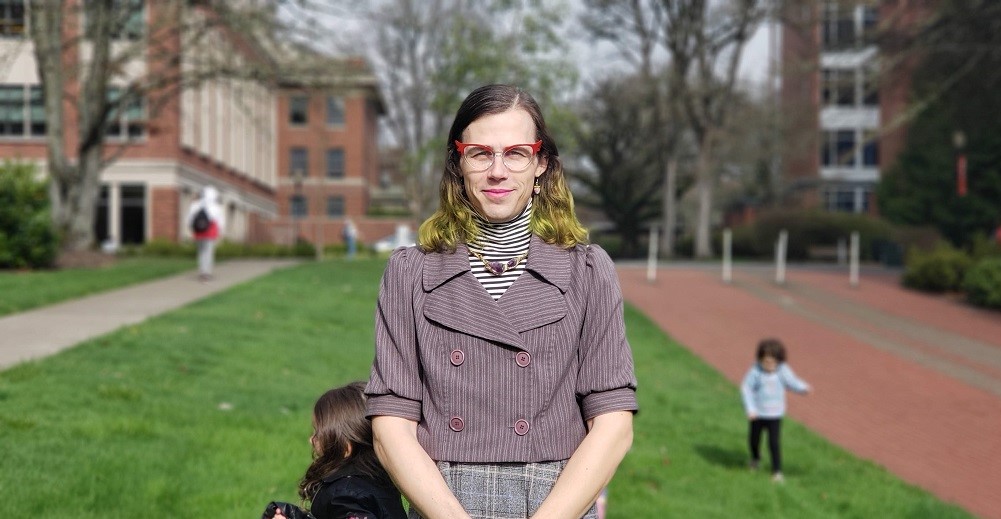 Tiramisu Hall is a Master’s student in the Women, Gender and Sexuality Studies and Queer Studies Minor at Oregon State University. Her research is on Two-Spirit storytelling focusing on the contemporary issues that Indigenous folx face, especially the experiences of mixed-race Indigenous people.

Hall’s work weaves together elements of traditional stories with contemporary issues and looks at how different communities can learn to live and work together for a better future. She is working on a graphic novel for her thesis, along with a literary and artistic analysis of it. “It is a work of fiction and there aren’t actually any human characters. It is set in a far future where humans have all passed away from a big disaster,” she says.

“This takes a lot from Qwo-Li Driskill’s work on 're-storying' and Daniel Heath Justice’s work on Indigenous literatures,” she adds. She wants her scholarship to be accessible to young adults and people with non-academic backgrounds. “My oldest who is nine is really interested in the graphic novel and will hear or read little bits or pieces of it and is really excited for it,” she says.

What was your journey that led you into this program?

Originally we moved up to Oregon so that my partner could attend Oregon State University’s Master's in WGSS. My partner completed their Master’s and is now in the PhD program. When my partner finished, I applied to the Master’s. I flip-flopped around between doing art and academic writing during my undergraduate degree in gender and ethnic studies. I wanted the best of both those worlds, and I could have that here. The current head of the graduate program is both Cherokee and Two-Spirit, and engages in the type of queer Indigenous storytelling research that I wanted to do through my art. I am also able to attend language lessons in Giduwa,which is a dialect of the Tsalagi [Cherokee] language. Learning my ancestral language from my thesis committee chair, Dr. Driskill, is a really big part of why I chose this program; almost bigger than anything else. Being in community with fellow Tsalagi folks and speaking our language together has proven invaluable to my education and growth.

Who were some of your biggest feminist influences and why?

I was raised by a single mother and that in itself was a sort of feminist influence. At points we were also living with my grandma so the sort of gender rules we would follow in a mixed-gender household weren't there. A lot of things that are associated with femininity that get shamed, were looked at as more powerful. It was also very confusing to receive messages of feminine empowerment alongside being gendered as masculine, so I struggled a lot with confidence before transition.

Judith Butler, Gloria Anzaldúa and Andrea Smith were some early influences I was exposed to in my undergraduate program. Dr. Qwo-Li Driskill is definitely one of my biggest feminist influences since entering graduate school, especially because for me feminism has to be Indigenous, it has to include trans people.

Alexis Pauline Gumbs’ work is another big influence, especially in the ways she engages mothering and connecting Indigenous futurity and Afrofuturist ideas.

What do you like about teaching? What inspires you to do it and what are some of your learnings as a teacher?

I always wanted to be a teacher. I really enjoy giving students more full feedback, being helpful, being there for them. I have taught online quite a few times, as well as in-person. One of the teaching experiences that really inspired me was when I was teaching Introduction to Queer Studies. It wasn’t just about teaching these theoretical ideas that  are important for queer folks, but about living them as well; about helping students form connections between the theory and their own lives My presentation as a trans girl had a really big influence on the class, as did my clothing. Sometimes being visible as a trans girl can have a big impact. I never saw any of us growing up, and that really slowed my growth as a person.

How do you feel to be a part of the WGSS community and how has it influenced you as a person?

This particular WGSS community is exciting for me because the head of our graduate studies program is queer and Cherokee, and so am I. So, the way that this program is very cognizant of Indigenous issues definitely is a big draw for me. As a trans girl who was raised by cis-heterosexual parents, and now raises her own queer children, I feel very invested in building a future that’s equitable to people of all genders and non-genders. Being involved in that work here, and growing through my studies of queer and/or Indigenous scholarship, has helped me grow as an academic, and artist, and a parent.

What were some misconceptions you have come across about feminism?

Before being in this field I was really turned off to feminists because I assumed that a lot of them didn’t have trans women in mind and I didn’t feel like I could be a part of that community. Definitely in this program it is not like that.

The way that feminism is taught here in the WGSS program is much different than that. But I think that there are sort of two feminisms that coexist : this more hegemonic form of feminism which I can’t identify with at all, and then the sort of feminism that includes all people(s) oppressed by cis-heteropatriarchal institutions. Even saying that there are two feminisms is a misconception, since there are probably about as many feminisms as there are feminists.