We don't live 'in' the current system. It lives on top of us Indigenous people, says Luhui Whitebear, activist and PhD candidate in the WGSS program. 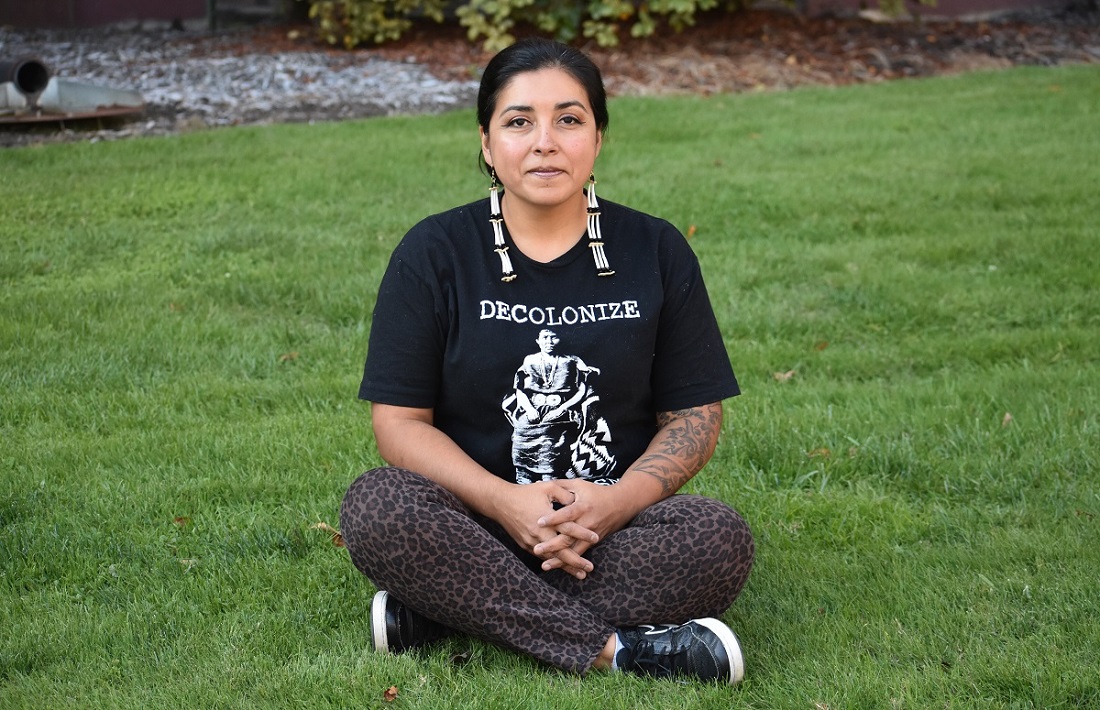 Luhui Whitebear (Coastal Band Chumash) is a PhD candidate in the Women, Gender and Sexuality Studies Program with a Minor in Queer Studies at Oregon State University. Having been an activist almost her whole life, Whitebear’s scholarship contributes to her activism, and dedication to working with tribal communities enriches her academic work.

Her dissertation is titled, “Secrets of Survival: Intergenerational Storytelling and Cultural Healing Through Gendered Rhetoric and Representation in Indigenous Activist Circles” and her scholarship is focused on gender rhetoric and representation where she is trying to locate the Indigenous people and voices that are missing in the stories circulating through Indigenous activist communities, including the recorded stories and ones that are told verbally. Whitebear wants to recenter the stories about Indigenous activist circles to focus on Indigenous women and LGBTQ2S+ people, “...to help reclaim not only positions within activist circles but within our communities because of the way that settler colonialism has really strove to erase those stories and those roles,” she says.

Her most recent publication is titled "VAWA Reauthorization of 2013 and the Continued Legacy of Violence Against Indigenous Women: A Critical Outsider Jurisprudence Perspective," in the University of Miami Race & Social Justice Law Review.

Whitebear has been a student at OSU since she completed her Bachelor’s degree in Ethnic Studies here in 2003, and went on to get another Bachelor’s degree in Anthropology in 2013. She has a Master of Arts in Interdisciplinary Studies (MAIS) degree with a focus on WGSS, Queer Studies and Ethnic Studies from OSU. She is also the assistant director of the Native American Longhouse Eena Haws.

What was your journey like that led you to the PhD program here in Women, Gender and Sexuality Studies?

I am a first generation college student, I was the first one to graduate high school too. I didn't really know what college was beyond a bachelor’s degree. When I came back to OSU in 2013  to work in this professional position at the Native American Longhouse Eena Haws, I was basically the only one on our professional staff team without a masters degree and so it was viewed as something that I needed to have to have more of a voice on campus. I had met Dr. Qwo-Li Driskill my first term and worked on an independent project with them on Indigenous queer and two spirit identities and histories. I started taking classes with them as well and it really opened my eyes to the WGSS program and the role that Indigenous feminisms has in our communities without having had that label before to understand and so I applied to the interdisciplinary program. I started looking at the way that heteropatriarchy was replicated within Indigenous activism and led to some violence and so my thesis really focused particularly on the murder of Anna Mae Aquash in the 70s and talked a lot about the way that oppression kind of re-manifested itself within the American Indian movement.

I also realized that having a masters degree doesn't make you any more heard as an Indigenous woman of color in an institution, especially a predominantly White institution. So it became less about for me to have a voice for my position here and more about continuing to think of ways we can help heal our Indigenous communities.

How do you translate scholarly knowledge for a non-academic audience, or in activist communities and what is that process like for you?

I find myself using a lot of narrative in my writing and I do use personal storying connections that I think people can relate to with my writing. I try to define words for people, give examples so that they can understand it. When I was writing papers for classes I would share with my parents or my brothers and they would ask me they would ask me what certain academic words meant so they could understand what I was talking about more. I would explain it to them so they could finish reading the paper. That's what helped me before I even finished my thesis: understanding the importance of people understanding the words. It doesn't do communities any good if they can’t access the information and that's the biggest challenge that scholars have that also do community-based work is, the communities being able to access information.

In addition to my mother and aunties, Malea Powell is definitely one. I look at her as part of a legacy of the transmission of Indigenous knowledge and the way that she frames Indigenous rhetorics has really helped me understand a lot of things especially when it comes to stories and the power of stories and asserting that our knowledges are legitimate too. Qwo-Li of course, as a mentor they have really been there for me and I have used their work in a lot of things.

Most recently I think a lot of the women that I am working with, with the murdered and missing Indigenous women’s work, have also been a big part of me thinking about how important this work is. Oregon Representative Tawna Sanchez is definitely somebody that I have looked up to my whole life. Seeing the way that she is using community-based and Indigenous knowledges in the political system has really opened my eyes and helped me understand the importance of interweaving the policy side of things in the way that they impact our lives. Lee Maracle's work, her book, "I am Woman" is what lit the switch in my mind about thinking more deeply about about our Indigenous communities and how oppression shows up in them, which really defined the course that my entire scholarly work was taking.

There is not a lot of representation of Indigenous people in classrooms. Just that in itself is a reason. To be able to talk through these complex issues that Indigenous people face in an academic setting is helpful for a lot of people that have never heard of some of these issues. For example, I taught the Native American law and policy class this past term and helping people understand there are laws and policies written that make certain violences and experiences exist in Indigenous communities that impact our lives really deeply. Being able to be creative in the classroom and bring in material like music and stories and people that you wouldn’t think of being guest speakers for class and using technology to video call people. I just enjoy seeing students learn and being involved with their learning process and they also help me learn in the process, they all bring their knowledge and perspectives and I really like having different perspectives in the classroom for them to consider and think about.

What excites you to be a part of the WGSS community and field? How has it influenced you as a person?

It is powerful to be part of something bigger. You are always part of something bigger being able to connect with other people that are doing great work, and learning from them too, their theories and understanding the power of solidarity. Personally, to think through what’s really important to me and who I am. Sometimes it doesn’t align with the field and sometimes it does and I think that that’s okay. The field has that flexibility. So we can assert our own knowledges in it as well. I don’t know if there is as much of an emphasis as there is in our program with some areas, especially with Indigenous feminisms in particular. The connections I have made have been amazing too, and seeing where our work comes together.

Would you describe yourself as an activist? Do you have that side to your personality?

Activism is not just in the streets. The book "Life as Activism" by June Jordan really helped me think about the different moments in our lives that are themselves activism as well. That helped shape how I think about our very existence as being activism because settler colonialism in this area is dependent on the continued erasure of the Indigenous people on these lands and just our very existence already is a form of resistance.

I don’t know how to separate activism from who I am. Some people don’t even like the term activist, but if we look at the definition of the term it is movement for change. That is why I like the term because I do not like this current system that we live in. But I don’t really think we live in it, I think it lives on top of us as Indigenous people. I was born into activism, my parents met protesting at a Pacific Connector liquified natural gas or LNG pipeline, on one of our sacred sites and I was in utero going to other things.

What is the best career advice you have ever received?

Just to stay true to who I am.

What are some of your learnings as a teacher?

Some of my learnings were that it’s okay to try new things and that it is important to ask for help when you need it. It is easy to get Impostor Syndrome and think, “Gosh, everybody knows what they are doing and I don’t.” And not just asking mentors for help, but your students for feedback too.

What were some misconceptions that you have come across about feminism and about Indigenous people?

One of the biggest misconceptions I think about Native people is that people in majority society think that we had all died off. I definitely want to change that narrative that we are disappearing or that we are something of the past. That is important to me and impacts different areas of my life whether it be with environmental justice or if it has to do with the mascot issues that I have worked on, or murdered and missing Indigenous women, helping people understand that we are still here and that we are worthy of dignity, respect and to be alive. These are some of the things that drive me in the community but also in the classroom because some of those misconceptions are ones that are brought into the classroom.

A misconception I have come across about feminism is that it is not for Indigenous people, that its a White thing. I like to challenge that by reminding people there is a lot of Indigenous communities that were very matriarchal. We all use colonizer languages all the time and it’s okay to use that one (the word feminism) too.

What were some challenges you faced as a researcher and how did you overcome them?

One of the challenges is what is considered research. Finding material that’s already academic work to use that has to do with murdered and missing Indigenous women. Some of what I have written about is hard to find material that you need to cite because there is not a lot published out there that’s through scholarly work. There are a lot of news articles but academic journals there is a small handful of books but it’s not something that there is a lot written about. Finding materials sometimes can be challenging. I used scholarly references for other aspects of it (like connections to violence and land, or land and body) and then use news articles for other aspects of it, or community based native newspapers.