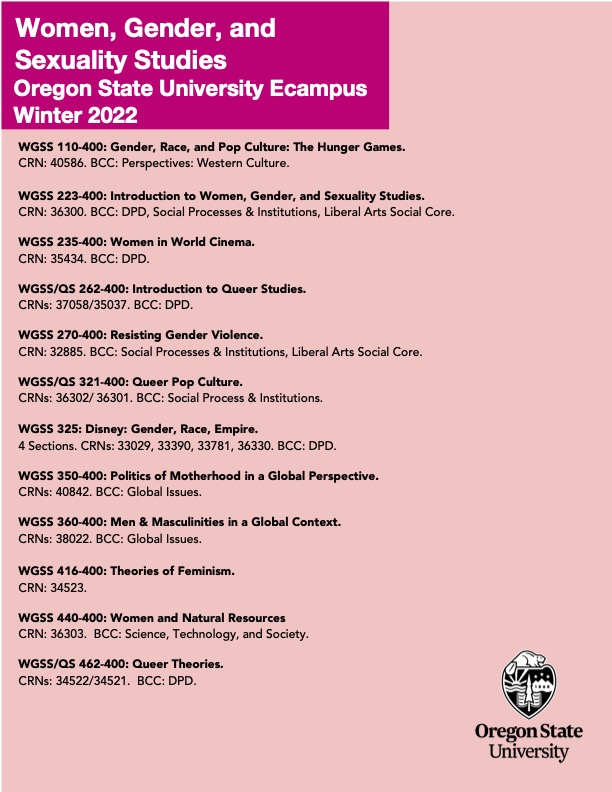 Introduces students to the critical analysis of mass media and representations of women, gender, sexuality, and race in popular culture. Topics vary from term to term and may include the entertainment industry, advertising, music, literature, the internet and technology. May be repeated for credit when topic varies.

Explores constructions and practices of gender in a transnational, multi-religious, and global framework by examining a wide variety of films about women around the world

Centering itself on activism and scholarship, this course examines homophobia's and transphobia's relationship with racism, colonialism, sexism, ableism, classism and other forms of oppression. Introduces key concepts, histories, and political frameworks within Lesbian, Gay, Bisexual, Transgender, and Queer political movements.

Addresses issues of domestic violence, rape, dating violence, as well as contemporary social debates about pornography and the media's impact on violence in society, which includes a global perspective. Course focuses on individual and collective practices resisting gender violence.

Examines the concept of Queer popular culture through film, music, TV, image, and other mediums. Seeks to disrupt dominant discourses around gender and sexuality by centralizing women of color feminisms and queer of color critiques to analyze popular representations of gender, sexuality, race, class, disability, and other social locations.

Explores constructions of gender, race, class, sexuality, and nation in the animated films of Walt Disney; introduces concepts in film theory and criticism, and develops analyses of the politics of representation.

WGSS 350-400: Politics of Motherhood in a Global Perspective.

Students will become familiar with central topics in global masculinity studies, analyze texts in diverse media, develop original arguments, and engage with issues of masculinity and representation through written and creative work.

Explores feminist conceptions about the nature of the world, women's reality and visions for change. Analyzes major issues raised by the women's movement and the development of feminist ideas, as well as provides a critical examination of feminist thought and different theories which comprise it.

Engages key themes and critical frameworks in queer theories. Topics include histories of sexuality; forms of oppression, including heterosexism, homophobia, and transphobia; resistance to oppression; violence against LGBTQ people; queer activism; diverse experiences of sexuality; and representations in literature, art, and popular media