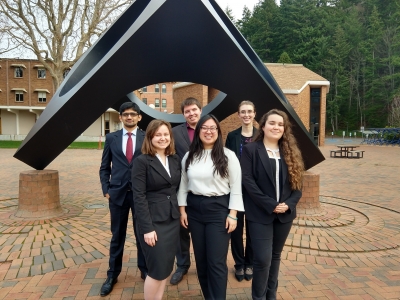 The tournament, which draws national-level competition to the Northwest, featured over a dozen schools, including: Carroll College, Helena, Mont.; Whitworth University, Spokane, Wash., and Willamette University, Salem. The invitational, the third designated tournament of the season for the Northwest Forensics Conference (NFC), featured hundreds of individual event and debate entries.

“This is exactly the type of result I enjoy: graduating seniors and a talented freshman doing well at a competitive tournament,” said Mark Porrovecchio, director of the team.  “The team couldn’t be happier with their performances.”

“We still have several great tournaments left this season,” Porrovecchio continued. “I’m sure that this experience will benefit all of the students.”