OSU Forensics Ends the Season on a High Note 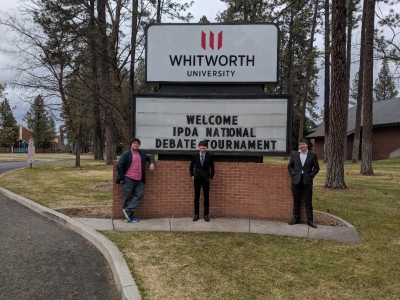 Sophomore Uwe Keist, a Political Science major from Corvallis, was an Octo-Finalist in Junior IPDA Debate.

“Keist’s journey this season has been amazing,” said Mark Porrovecchio, director of the team. “It nice for him to receive national recognition for his efforts.”

Keist was joined Junior Kaden Meyers, a Political Science major from Sandy. Meyers competed in Open IPDA Debate and missed out on breaking by only a few speaker points. They both also competed together in Team IPDA debate. 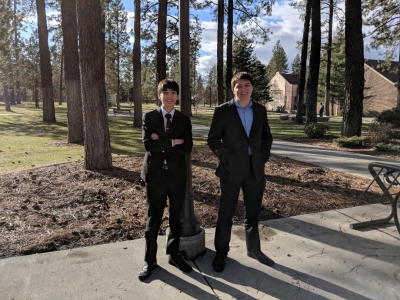 “Looking ahead to next season, Steele and I are lucky to have Meyers and Keist coming back to help guide the team,” Porrovecchio continued. “We have an exciting list of tournaments to look forward to, including a national competition in Louisiana and an international tournament in Berlin.

Celebrating its 125th season, OSU Forensics is one of the oldest clubs on campus and a member of the Performing Arts Board in the School of Arts and Communication.  The team is open to all students in good academic standing regardless of experience or academic background.  If you are a student interested in participating, or a member of the community who would like to support the team, please contact Porrovecchio at mark.porrovecchio@oregonstate.edu.

Pictured One (l-r): Evan Steele, Uwe Keist, and Kaden Meyers at the entrance to Whitworth University.