OSU Forensics ends their regular season on a high note 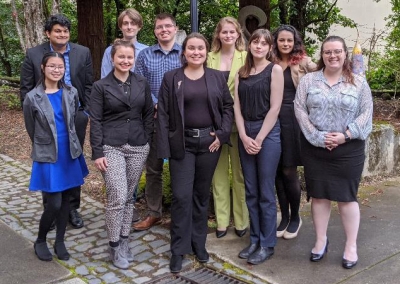 The qualifier, which brings together colleges and universities in the Northwest (Division II) region, is the final competition before schools turn their attention to national tournaments.

“I am so delighted to see so many of our new students doing so well,” said Mark Porrovecchio, director of the team. “This tournament is a perfect end to the regular season.”

The team was coached by graduate assistant Kaden Meyers of Sandy. Meyers, a former student competitor for OSU, who is now working on an MAIS degree in the Speech Communication area of the School of Arts and Communication.

Celebrating its 126th season, OSU Forensics is one of the oldest clubs on campus and has representation on the Performing Arts Student Advisory Board in the School of Arts and Communication. The team is open to all students in good academic standing regardless of experience or academic background.  If you are a student interested in participating, or a member of the community who would like to support the team, please contact Mark Porrovecchio.