OSU FORENSICS HAS A DOMINANT PERFORMANCE AT REGIONAL FAVORITE 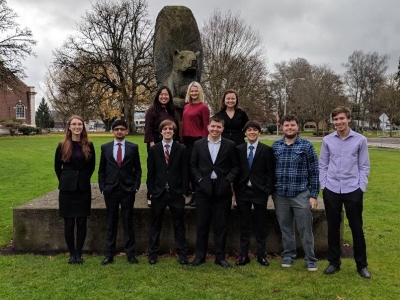 The tournament, which draws national level competition from inside and outside the Northwest, featured over a dozen schools, including: Western Washington University, Bellingham; the University of Oregon, Eugene; and University of North Texas, Denton.

As a result of these outstanding wins, the team took fourth place in the overall tournament sweepstakes.

“It is truly impressive how great the team did this past weekend,” said Mark Porrovecchio, direct of the team. “To see seasoned competitors and talented newcomers do this well is humbling for me as a coach.”

“The team has experienced impressive growth this season,” said Porrovecchio. “What hasn’t changed is the degree to which the team members help each other. These results speak to that supportive environment. ”