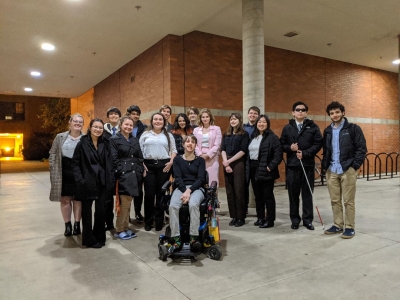 “The response to our tournament was, as always, humbling,” said Mark Porrovecchio, director of the team.  “It was also great to see our team do so well while pulling double-duty hosting other schools.”

As a result of the team’s impressive performance, they took the third place sweepstakes award in the four year college and university division.

The team was coached by graduate assistant Kaden Meyers of Sandy. Meyers, a former student competitor for OSU, is now a MAIS student in the speech communication area of the School of Arts and Communication. Also helping the team at the tournament were Evan Steele and Forest Ledbetter, alumni who both competed on the team and then served as assistant coaches while pursuing their MAIS degrees

“These sorts of victories are a result of teamwork and the support of members both past and present,” said Porrovecchio. “I think other teams look forward to our tournament because we provide them with a competitive and interpersonally focused experience.”