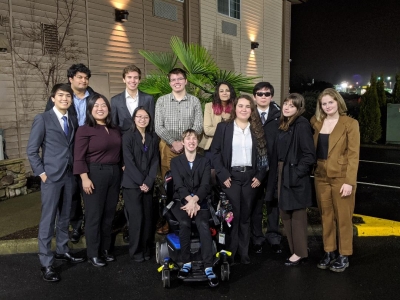 The tournament, which draws national-level competition to the Northwest, featured more than a dozen schools, including: Boise State University, Idaho; Whitworth University, Spokane, Wash.; and Western Washington University, Bellingham.. The competition, the third official tournament of the season for the Northwest Forensics Conference (NFC), featured hundreds of individual event and debate entries.

“This team continues to impress me,” said Mark Porrovecchio, director of the team.  “They came back after the holidays and, with little time to prepare, logged one of the team’s best performances in nearly a decade.”

The team’s efforts resulted in them taking the third place in the overall sweepstakes award.

The team was coached by graduate assistant Kaden Meyers of Sandy. Meyers, a former student competitor for OSU, is now a MAIS student in the Speech Communication area of the School of Arts and Communication.

“These results are a win for the entire team,” said Porrovecchio. “I am so lucky to work with such an engaged and mature group of students. OSU should be proud.”