‘Psithurism’ is defined as the sound of wind in the trees and rustling of leaves. My interpretation is synesthetic—pushing beyond sound to a visual almost palpable sensation that each artist in the exhibition navigates with paint. 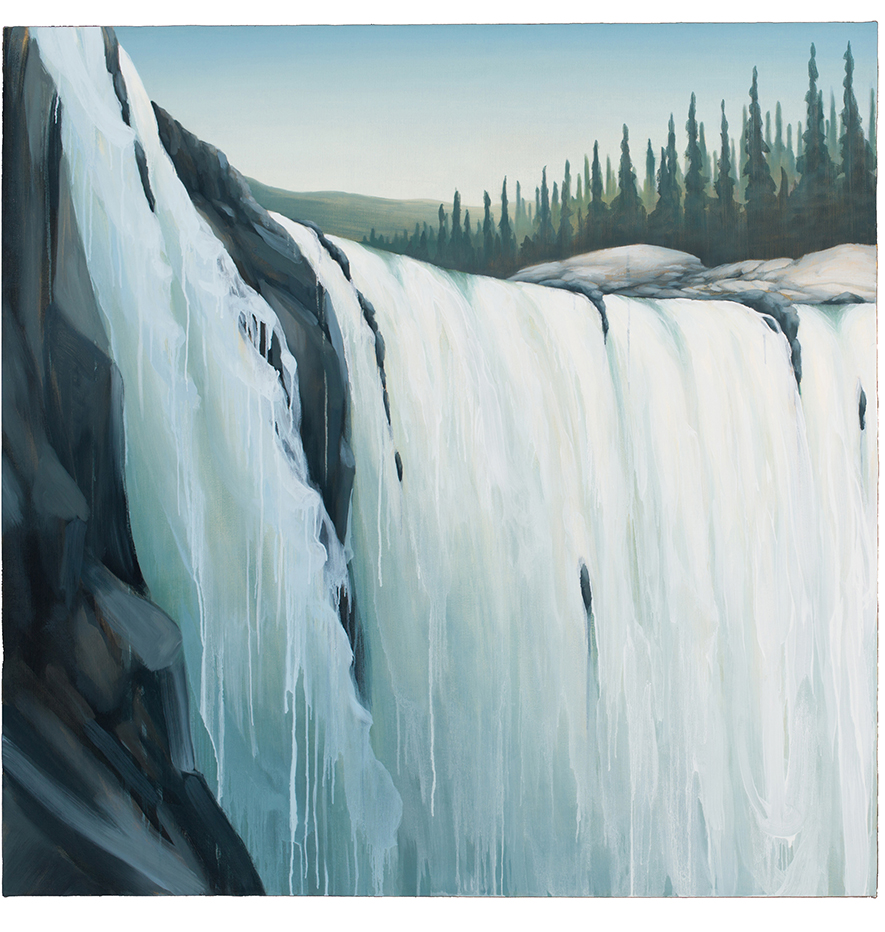 Dan Attoe’s paintings depict natural wonders—waterfalls, beaches, mountains, rocky cliffs, over-sized forests— populated by tiny figures spouting even tinier diaristic missives, painted in silver and culled from the artist's stream of consciousness. The miniature humans disrupt the grandeur of nature with their small stature and utterances. His drawings share the same concerns but inverted—the phrases and disconnected images are larger and often cartoonish, creating small-scaled narrative vignettes. Attoe makes a small drawing every day that he keeps for himself—slightly larger drawings and paintings expand upon this practice. John Motley observes in The Portland Oregonian, “Multiple

drawing styles reinforce the varying perspectives on youth and childhood, from pure, storybook fantasy to a less- innocent complexity, where fear and sexuality mingle.” Attoe said of his work, “The landscape can be enjoyed for its beauty, and the disparity between it and the figures, but it also exists in service to these contemporary people in funny or ordinary clothing saying everyday things about e-mails or engaging in interpersonal clumsiness.”

Drawing upon the loneliness of the practice of painting, Rainen Knecht further isolated herself from the youth market in the woods of Washington State to the community of Outsider or Folk Artists from the Pacific Northwest. Knecht’s works based off of intuition, using the practice as a freeing, therapeutic, and imaginative escape. As her work appears to be unapologetically traditional, the spontaneity in her gestures and the discoveries found in addressing new problems brings in a personal element that still remains true to the medium. Knecht is committed to upholding the medium while exploring themes of loss, suffering, and compassion.

Claiming, “my work celebrates the messy, mystical, mad, human-scaled, rhythmic, Romantic, exuberant and excessive,” Hayley Barker merges abstraction and representation to produce paintings and drawings stemming from her interest in the body, nature, and psychological and visual experiences. Her work is grounded in the research she does into literary and historical texts, people, and places that reflect altered mental states. In her “Cathedrals” (2010-12) series, for example, she draws on the diary of naturalist and poet Opal Whiteley, who communed with nature and was eventually diagnosed with schizophrenia. Barker revisited the sites of Whiteley’s experiences, which she called “cathedrals”, translating them into lush, richly painted, semi-abstract landscapes and natural scenes as she may have experienced them. Her works are equally driven by her sense of the emotional resonance of color and the pleasure she derives from the act of painting itself.

Kim Dorland is a contemporary Canadian painter best known for his visceral depictions of densely forested landscapes, trailer parks, raucous parties, and zombies. The artist often revisits themes of his personal experience growing up impoverished, falling in love, and the challenges modern society poses to the natural environment. The thickness of his paint application—often requiring bolts in its display to support the weight of the many layers of oil paint—is similar to the sculpturally painted works of Gina Beavers, while the playful vernacular imagery is reminiscent of Jonas Wood. Born in 1974 in Wainwright, Canada, Dorland went on to study at the Emily Carr Institute of Art and Design in Vancouver before earning his MFA from York University in Toronto in 2003. In 2017, Equinox Gallery in Vancouver featured the artist’s newest paintings in a solo show, “Nemophilia,” and he has shown widely throughout Canada and the United States. The artist’s works are in the collections of the Museum of Contemporary Art San Diego, the Montréal Museum of Fine Arts, and the Glenbow Museum in Calgary, among others. Dorland lives and works in Toronto, Canada.