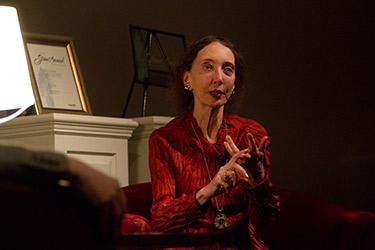 The biennial award is given to a major American author who has created a body of critically acclaimed work and who has – in the tradition of creative writing at OSU – been a dedicated mentor to young writers. The honorarium for the award is $20,000, making the Stone Prize one of the most substantial awards for lifetime literary achievement offered by any university in the country.

The award was presented to Oates at a special event on May 10, 2012 at the Portland Art Museum Fields Ballroom. OSU Distinguished Professor of English Tracy Daugherty conducted an on-stage interview with Oates. A reception and book signing followed.

“Joyce Carol Oates is that rare literary figure who, over the course of an extraordinarily productive literary career, has also given generous attention and energy to young writers,” said Marjorie Sandor, former director of the Master of Fine Arts Program in Creative Writing at OSU. “Unflagging in her support for literary magazines and presses, she has enriched and enlivened our nation’s cultural life.” Oates is the author of books in several genres including “Give Me Your Heart: Tales of Mystery and Suspense” (2011) and “In Rough Country” (2010). Her newest novel, the psychological thriller “Mudwoman,” was released in March 2012.

She published her first book in 1963 and has since published more than 50 novels, as well as many volumes of short stories, poetry, literary criticism and essays. Her novel “them” (1969) 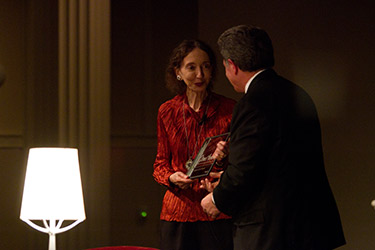 The Stone Literary Award was established in 2011 with a $600,000 commitment from OSU College of Liberal Arts alumnus Patrick Stone (’74). Stone and his wife, Vicki, chose to endow the literary prize in order to acknowledge the growing national reputation of OSU’s creative writing program, as well as its commitment to mentoring students, building community, and reaching out to underserved populations including at-risk youth and veterans.

In addition to the Portland event, Oates gave a free public lecture in Corvallis on May 9 on the OSU campus.