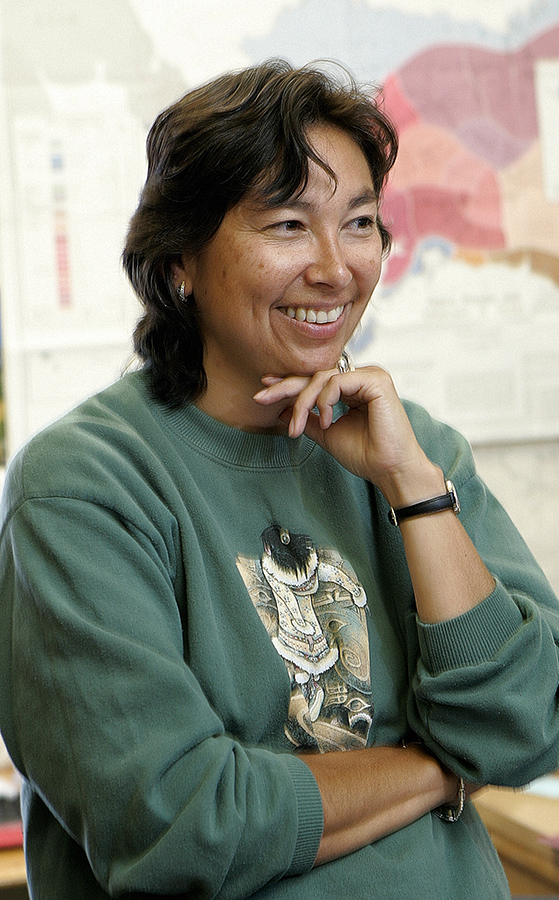 This award offers a full academic year (3 terms) of tuition remission, stipend, and health benefits at a .49 FTE level.  Each term during the award, the awardee will serve as a graduate teaching assistant for an undergraduate anthropology course at OSU.  After the first year, awardees will be eligible for additional support as a graduate teaching assistant at a .3 FTE level, limited to 3 terms (1 year) of support for MA/MS students and 9 terms (3 years) for PhD students.

The Deanna Kingston Memorial Graduate Teaching Assistantship is designed to promote the advancement of Native American, Alaska Native, Indigenous North American, Native Hawaiian, and Pacific Islander students in the OSU Anthropology Program and School of Language, Culture & Society, as well as the university, community, and state.  The award honors the legacy of Dr. Deanna Paniataaq Kingston, a descendant of the King Island Native Community (Alaska) and Associate Professor of Anthropology at OSU. Dr. Kingston dedicated her career to studying and honoring the culture of her ancestors: the Inupiat of King Island, Alaska.  In addition to her pioneering work on traditional ecological knowledge, she studied traditional kinship systems, as well as the role of songs and hunting dances in preserving cultural identity. Her research was uniquely informed by her personal understanding of the colonization and relocation of Native peoples. Dr. Kingston interned at the Smithsonian’s Arctic Studies Center, and worked on a film collection of King Island life, now housed at the National Museum of Natural History. In 2003 she received a National Science Foundation grant to document and compare scientific knowledge with traditional knowledge of King Island, for the betterment of all.

Dr. Kingston's impact extended beyond her research. Later in life, she worked with Oregon State Representative Sara Gelser on a prescription drug repository bill to help uninsured cancer patients who could not afford prescription drugs. In 2010 Kingston received the Phyllis S. Lee Award from OSU for her commitment to social justice. She dedicated much of her time to supporting Native students at OSU, and served as an advisor for the university's Native American Longhouse (recently renamed the Kaku-Ixt Mana Ina Haws).

In 1993 Dr. Kingston received a Master of Arts in Interdisciplinary Studies, with a focus on anthropology, from OSU.  In 1999 she completed her Ph.D. at the University of Alaska-Fairbanks.  She died in 2011 at the age of 47 from metastatic breast cancer.

Deanna meant so much to so many people at OSU and beyond.  This award is one way the OSU Anthropology Program and School of Language, Culture & Society honors her life's work and legacy.

Applicants are encouraged to explore the research topics of OSU anthropology faculty, as well as current graduate students, to identify potential mentors whose research aligns with their own goals. Applicants with questions about any aspect of the Kingston Memorial GTA Award or the OSU Applied Anthropology Graduate Program may contact the Graduate Advisor, Dr. Sarah Cunningham (Sarah.Cunningham@oregonstate.edu).

To apply for this award, interested students should first apply for admission to either the Master's or PhD program in Applied Anthropology at OSU. Applicants should indicate their interest in the award within their application, and briefly discuss their tribal affiliations and engagement with indigenous communities in their Statement of Purpose. At least one letter of recommendation included in the application should also briefly address the applicant's relations and engagement with tribal or indigenous communities.

The Kalapuya Seasonal Round November 09, 2022

The Kalapuya Seasonal Round: Join Kalapuya member of the Confederated Tribes of the Grand Ronde and OSU Professor David Lewis for the second talk in this year's Champinefu Webinar Series. This talk will provide insight into how Kalapuya developed a sustainable housing model that served them well for over 15,000 years. Wednesday, Nov. 9 at 7 p.m. on Zoom. Co-sponsored by the Spring Creek Project. Register here.

The exhibit, which debuted last fall at the Salem Art Association, tells the story of Kalapuyan history and culture.

Loretta Ross joined the women's movement in 1978 by working at the first rape crisis center in the country where she learned about women's human rights, reproductive justice,...…
Jan
27
2023