Home » Economics » Programs » About Us

The list below chronicles the history of the Economics Program at OSU.
The Economics wishes to thank Dr. Richard Towey for providing us with this information (1873-1966).

In the early years of Corvallis State Agricultural College one course in Political Economy was offered in the School of Moral Science. Until 1908 the course was always taught by the president of the college. From 1873-1890 President B. L. Arnold instructed.

Rise and Shine, 1892. Oregon Agricultural College cadets lined up for morning inspection as the early morning sun illuminated the new men's dormitory. Now known as Fairbanks Hall, this building was constructed in 1892 as a men's dormitory and was originally named Cauthorn Hall. Women lived in the dormitory from 1912 until the early 1930s, when it was converted into a classroom building. The building is now home to the Art Department. [OSU Archives #43]

President Thomas M. Gatch, Professor of Mental and Moral Science, offered Political Economy. He used Richard T. Ely's Textbook. The course description in the catalogue indicates that the first half of the term was devoted "to familiarizing students with the principles of the science." The last half of the term was devoted "to debates, discussion, and thesis work." Such topics as "the labor question, socialism, taxation, money, and tariffs” receive attention.

With the creation of the School of Commerce, economics became a separate department. The faculty consisted of Professors Bexell, Crawford, and Horner. Five courses in economics were listed:

The department was retitled the Department of Political Economy and sizable course expansion took place. In addition to the curriculum above, such courses as Commercial Geography, Money and Banking, Corporate and Public Finance, Production of Raw Materials, Manufacturing, Insurance, and Rural Economics were added.

The department name was changed to Economics and courses in Industrial History, the Economic History of the United States, Labor Problems, and Agricultural Economics were added. 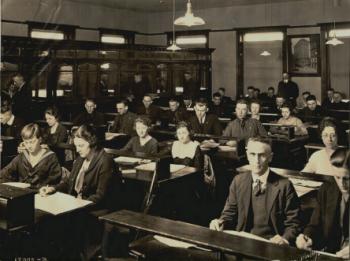 With the establishment of the OSSHE only lower division and service courses in the social sciences were allocated to Oregon State. Course offerings in the social sciences were cut back severely. Economics offered only the following courses: Principles of Economics, Outlines of Economics, Labor Problems, Money and Banking, Public Finance, and Transportation. A College of Social Sciences was created with Dean James Gilbert of the University of Oregon in charge of the administration of all social science work at the University of Oregon and at Oregon State.

In 1934 an administrative unit entitled Lower Division and Service Departments was created at Oregon State. It appears that at that time Economics, Sociology, and Agricultural Economics became separate departments. Agricultural Economics was assigned to the School of Agriculture and continued to offer undergraduate and graduate degrees. Economics and Sociology remained in the Lower Division with only service functions. Professor Nelson continued as head of the Department of Economics. The next major course expansion came in 1944 when courses in Economic Geography, War and Reconstruction, Public Utilities, Public Finance, Business Combinations, Business Fluctuations, Comparative Economic Systems, and Collective Bargaining and Labor Legislation were added. 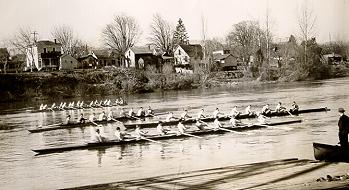 Photo: Crew on the Willamette River, 1935. The Oregon State Rowing Club was established in 1929 and won its first race against the University of Washington. This photograph, taken from the crew docks, shows the west bank of the Willamette River north of the Van Buren bridge. [OSU Archives #50]

In 1947, faculty and courses in geography were added to the Department of Economics. In addition, graduate courses in the History of Economic Thought and Economic History were assigned to the department. However, they were listed in the catalogue under the Department of Agricultural Economics and enrollment was restricted to graduate students majoring in agricultural economics. 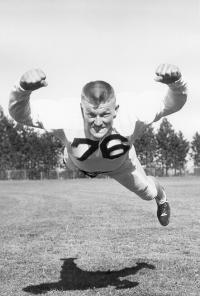 In 1957, Professor Nelson retired as department head and Charles B. Friday became chairman.

Photo: Beaver Fighting Spirit, ca. 1955. A football player identified only as "Buettgenback," invokes terror on the field even in practice! His Beaver fighting spirit will definitely be called on for the game this Saturday. [OSU Archives: P4:94]

In 1960, the OSSHE authorized the creation of a new School of Humanities and Social Sciences replacing the old Lower Division. Degrees could be offered in general social science. Considerable course expansion in economics took place.

In 1966, BA and BS degrees in Economics were authorized by the OSSHE. In that year a separate Department of Geography was created, removing geography courses from the Department of Economics. 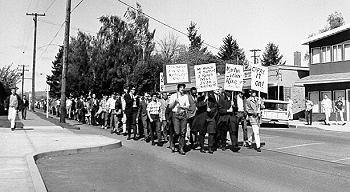 Photo: Martin Luther King, Jr., Memorial March, 1968. More than 1200 OSU students and faculty and Corvallis citizens marched in memory and honor of Martin Luther King, Jr., several days after his assassination in April 1968. The procession extended from the Memorial Union quadrangle to the Benton County Courthouse. All OSU classes were dismissed from 10 am to noon and all OSU offices (including the Library) were closed during the march. A solemn ceremony on the steps of the Benton County Courthouse included speeches by OSU President James Jensen and OSU faculty and students. [OSU Archives P120:5013a]

In 1988, master's and Ph.D. degrees in Economics were authorized by the OSSHE. A common set of core courses (in microeconomics, macroeconomics, and econometrics) were jointly administered by three departments: Agricultural and Resource Economics, Economics, and Forest Resources. All three departments could offer graduate degrees in economics, but the Department of Economics set the degree requirements. Graduate students could specialize in the "economics of growth and change," an area that gave students the opportunity to specialize in urban-regional-international economic growth, human capital, and industrial organization and technological change. From 1990 to 1993, a number of 600 level courses were added and the number of graduate students in the Department of Economics increased from 2 to 32.