Tom Jay became an active member of the Northwest Art Community in 1966, when he arrived from a two-year apprenticeship at an art foundry in Ontario, California. 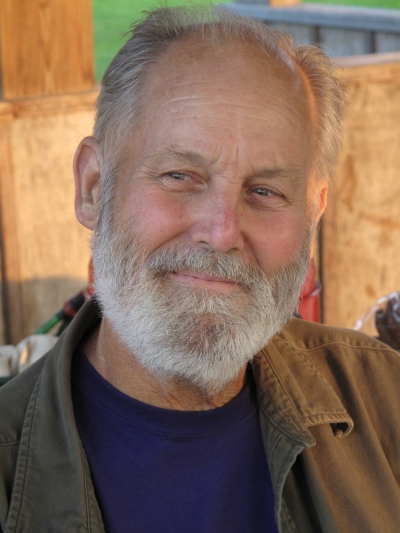 Tom cast for his wife, Sara Johani, also a sculptor, as well as his own work. He also cast the work of students in Sculpture Revealed, a primer in bronze casting that Tom and Sara taught for fifteen years. Alumni of the class had casting privileges at The Lateral Line Bronze Casting Studio in Chimacum, which became a kinder, gentler casting studio in later years, rather than a production foundry.

Tom’s work includes both private and public commissions, among them a large bronze prayer wheel commission for a Bainbridge Island community and several sculptures for the Fauntleroy community park in Seattle. His most recent work is the King Salmon slide for the town of LaConner, Washington — a 23-foot sculpture rendered in ferro-cement and stained in a returning King’s colors. He was not able to finish his last sculpture, a meditation bell for Port Townsend, Washington, before he passed away in November 2019. It is being prepared for molding and casting by fellow sculptors and will be dedicated when finished and we can gather again.

In addition, Tom was a gifted essayist, poet and storyteller; his fascination with words and their roots reached back to his childhood, thanks to his father, who introduced him to a dictionary at an early age. Tom wrote a weekly column on word origins, which was published in the Port Townsend Leader for many years. In 2006, his essays and poetry were collected and published by Empty Bowl Press in The Blossoms Are Ghosts at the Weddings; the expanded edition came out just a month before he passed in 2019 and is available through Empty Bowl Press.

Tom and his wife, Sara, were active in salmon restoration and education for decades and raised a son, Dru, who lives and works in Montreal, Canada, with his wife, Rebekah, and their son, Rafael, born 2020.

Take Your Troubles to the Foundry — for Tom Jay

Get to know Tom a bit more in this interview by fellow writer Holly Hughes, recorded as part of the Triton Talks Lecture Series at Edmonds College.