The first floor of Moreland Hall is home to Florence (our platen press), Little Moe (our table top platen press), and Philip (our proofing press).  MFA students have access to each machine during their two years at Oregon State through which they will learn how to compose and print texts using processes that date back to Gutenberg’s time.  By giving its students the opportunity to hand set type and to reflect on how that changes their relationship to the text/language, reading, and meaning, the MFA Program encourages its students to explore texts as visual images as well as communication tools.

The letterpress project is spearheaded by Professor of Poetry Karen Holmberg, who acquired the presses and now manages the studio.  The following article in the Corvallis Gazette-Times tells the story of this important new (old) addition to our program: The traditional type: Old-style press gives new life to students' poetry.

Check back on this page soon to see some student letterpress projects!

I’m in the basement of Moreland Hall, watching Associate Professor Karen Holmberg demonstrate how to work her newest obsession: a massive, solid metal printing press, currently in operation as Holmberg spins the crank. I’m hypnotized by the circular motions and the metallic sound and the smell of fresh ink. The gears spin, delivering a satisfying series of kachunksas the plates press together.

This printing press, nicknamed “Florence” after the coastal Oregon city it used to call home, is a new resource available to students and faculty across the school. From poets in our graduate program printing original broadsides of their work to undergraduate students studying how Shakespearean plays printed from (sometimes badly) handwritten notes resulted in a variety of versions of a single text, Florence has already proved useful and popular. We have Holmberg and local artist Ed Rettig to thank.

When Rettig couldn’t find a good use for the press in his own work, Holmberg saw an opportunity. She managed to get the press itself for $1500, and another $300 for the printing plate that goes with it. “All of the type is donated, though,” Holmberg said. “Aside from this big press, everything we’ve got here is donated.” There are dozens of trays of type, each of which could cost hundreds, if not thousands, of dollars.

“Florence used to be an electric letterpress, but she was modified so that she’s now crank-op,” she added, demonstrating again the fine craftsmanship of Florence’s many cogs and plates. These days, presses like Florence are incredibly rare. “They’re very technical and very heavy,” Holmberg noted. Often, they’re scrapped for metal. Florence, though, has found a home in the basement of Moreland Hall; to squeeze her in, they had to take out part of the wall. As her gears spin and the metal creaks, the floorboards do too, not yet fully settled to the shifting weight above them.

Only two newspapers in the country still use letterpresses like this; they were rendered obsolete by the introduction of the offset printing press, which made mass production far easier. The surviving letterpresses, like Florence, are rarities favored by poets and artists.

“Working with type is very meditative, I find,” Holmberg told me.

Since I hadn’t completed one of the training courses to use Florence, I couldn’t do any typography with the press, but Karen offered to show me more about the general typesetting preliminary process, to which I happily obliged.

From my first step into Moreland’s basement, I noticed a complete, almost meditative silence. A handful of SWLF students and faculty alike each had their own stations and drawers of type in different fonts that took up basically every elevated space in the room. Holmberg leaned over a student who was getting ready to ink their type for the first time. As she inspected it, she said, “If it has two or more errors, it goes back on the stick.”

I watched them for a bit before I gave it a shot myself. First, I picked out my own typeface. Sometimes bigger is easier to work with since it’s not as prone to falling over on the stick and it’s easier to see if you’ve done something wrong. The type has to go on the composing stick, a small metal tray that holds the block of text you’re working with, upside down and backwards, so it can be somewhat challenging to lay it all out.

Next comes binding it together. I brought my type over to a small metal tray, very gently sliding the type from the stick onto the tray. Everything in this process is ridiculously precise; if you mess up just a little, if a single letter falls over or gets out of alignment, the only way to fix it is by going back to the beginning, back to the stick.

Once it’s off the stick, you bind type together with twine so it doesn’t slide around during the inking. Ink is rolled on carefully by hand; you aim for just enough ink on the type to make a nice, bold print, but not so much that the print turns out blotchy. Finally, you set your paper on top of your type and roll over it with a roller, not unlike the way that mechanical presses like Florence operate. After the type is done, you do the entire process in reverse to clean up: de-ink the type, untie it, put it back on the stick and carry it back to the trays, where you put your pieces back.

The finished products from this process can seem simple; the act of spelling out my own name took around 20 minutes. But other people were composing their own poetry, laying it out, inking the type onto paper in different ways again and again. Working with Florence brought home for me how there are infinite applications for a machine like this in the school.

Professor Susan Rogers agrees. “It’s an exciting opportunity for grad students to think about manipulating text in a small, tactile, very physical way,” she says. “It lets you focus letter by letter, and that’s so important in slowing down in writing.” Rogers hopes to take her fall creative writing classes down to Florence so they can experience the magic firsthand.

When asked about his hopes for Florence’s use in the School of Writing, Literature and Film, Director Peter Betjemann had this to say:

“The letterpress studio is an extraordinary example of what happens when faculty follow their intellectual passions. Professor Holmberg invested her own professional development resources to build an amazing space that welcomes both undergraduate and graduate students to experience texts in material, physical forms. We can consume and analyze and compose texts at our desks. But to physically produce texts, as students have the opportunity to do in Holmberg’s studio, brings a whole new dimension to both the creative and the analytical activities that are the lifeblood of the School of Writing, Literature, and Film.” 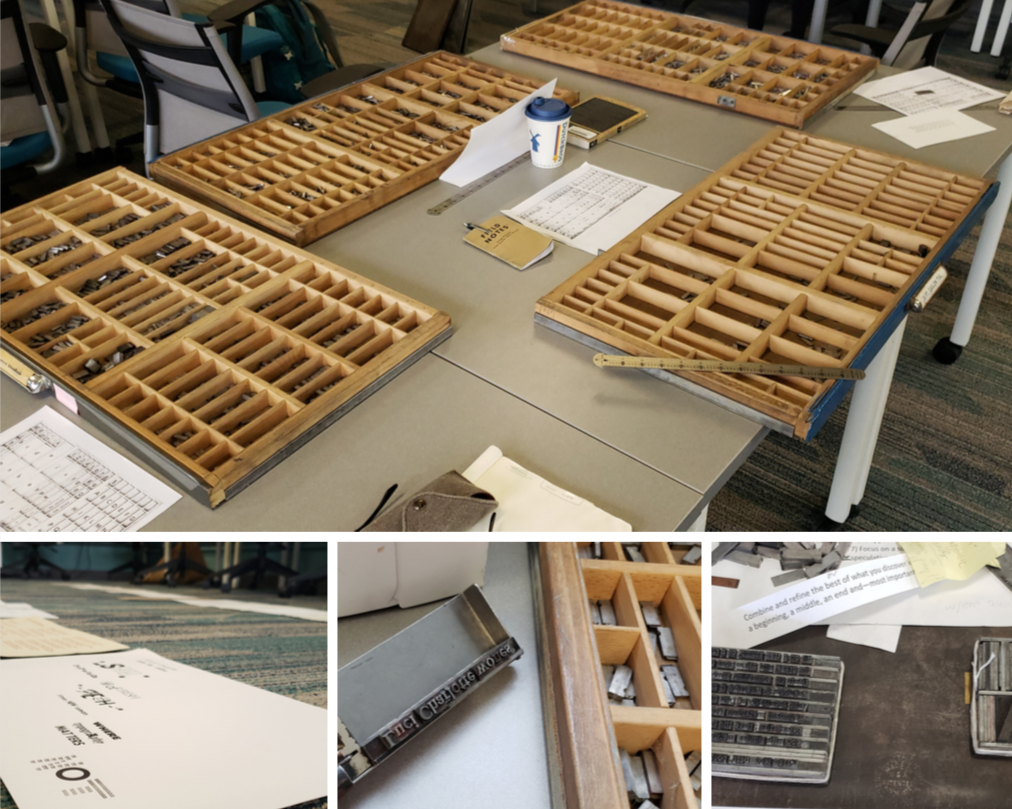