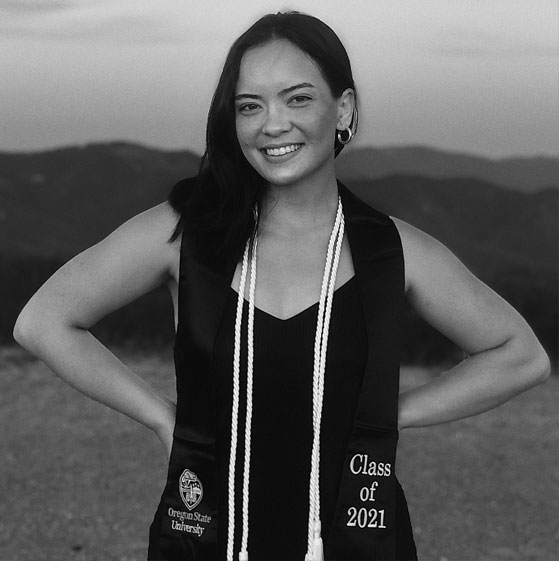 Degree: She’ll be graduating with a bachelor of science degree in managerial economics, with a minor in public health management and a certificate in the medical humanities.

What’s next: She’s considering working in the public service or philanthropic sectors to get experience in the labor market before applying to graduate schools.

So it’s a surprise to learn that, these days, she listens to economics podcasts in her car – and if her younger sisters want Miles to drive them anywhere, she forces them to listen as well.

The sisters, Miles said, listen “very much begrudgingly.” But by the time it’s over, “they’ll be sort of grumpy, but they’ll say, ‘All right, that was pretty cool, I guess.’”

Her sisters will be particularly interested in a podcast if it touches on issues of social justice. And, in a way, that intersection of economics with social justice helps explain how Miles, just a few years removed from sweating over tests at North Medford, now is graduating from Oregon State University with a degree in managerial economics, with a minor in public health management and a certificate in the medical humanities.

Certainly, economics wasn’t part of the plan when Miles enrolled at OSU. The original idea when she came to Corvallis was to study public health; OSU was the logical choice because its College of Public Health and Human Services is the only accredited program on the West Coast.

But a couple of introductory classes in economics, taught by Michael Nelson and Jon Chesbro, opened her eyes to different possibilities. In those first classes, Miles said, she “really realized the power of economics and how it’s very much the backbone to policy. The combination of econ and public health is a great lens for advocating for human capital investment.”

For example: Miles, whose mother immigrated to the United States from the Philippines to be with a relative, has long been interested in what she calls the “feminization of migration.”

“There are all these social constructs and expectations around motherhood, and a lot of that has to do with being a very directly caring figure in the household,” she said. “But when there’s really no economic opportunity at their home, they have to reassess what it means to be a mother and shift that into being an economic provider. And so they will migrate abroad and then send back remittances. The children may join them or the children may use those remittances to oftentimes invest in education.”

About the time that Nelson and Chesbro were opening Miles’ eyes to the possibilities of economics, she got an additional nudge: She received an email from faculty members in the department that told promising students about career and earning opportunities in the field.

Miles sums up the message she got when she read the email: “You’d be a good econ major!”

It could be – although it’s not certain – that the email Miles received was part of an OSU study into whether emails could be effective tools to attract female students to the profession. The two economics faculty members who ran the study, Liz Schroeder and Todd Pugatch, recently concluded that the email nudges, presumably a best practice to attract women to the field, may not have had the intended effect: In fact, the two found, the emails appealed more to male students. (The department also sends out a general email to students who do well in introductory economics courses, encouraging them to major in the field, and the message Miles got could have been part of that group.)

In any event, in Miles’ case, the email worked: “It was actually pretty influential,” she said. “It was sort of like the final push” to declare an economics major.

Schroeder said that Miles went on during her time at OSU to work with the department’s outreach efforts by participating in its Women in Economics Club and helping develop a mentoring program to support underrepresented students in economics.

Schroeder called Miles “a true leader on campus. … Her work on the mentoring program shows that she exemplifies the best of what it means to be a CLA (College of Liberal Arts) graduate. She studied academic research on mentoring, used best practices learned through other mentoring work at OSU, and drew on her own personal experiences. Synthesizing all this information, she was able to design a program that will benefit students for many years to come. Mahal was a fantastic collaborator and I learned so much from working with her. She’s leaving behind a legacy that makes our program better, and her work on making economics more inclusive helps improve the entire field as well.”

For Miles, the deeper she got into the field, the more she understood how economics can serve as the “backbone” to policy. “It offers a very systemic way of thinking and a very methodical approach to policy analysis.”

During her time on campus, Miles found time for other pursuits beyond economics. She’s served as a peer advocate in the Associated Students of Oregon State University’s Advocacy Office, working with students on issues, such as allegations of academic misconduct or code of conduct violations.

“We’ll meet with students, hear their story, review the allegation, attend college hearings officer meetings with them and really support them with whatever decision they make,” Miles said. “We don’t necessarily advise students but rather advocate for them, ensuring that they know of their rights and how due process works.” Her goal is to make sure that, regardless of the outcome, students feel “it’s been a thorough and just and educational process.”

Miles didn’t ignore the creative process during her time at OSU, taking a pair of poetry classes from Jennifer Richter, an Honors College colloquium on poetry and Greek myth, and a craft course on narrative medicine.

One of Mahal’s poems quotes lines from Mary Oliver’s “Invitation” as a epigraph:

Richter said she wasn’t surprised that Oliver’s poem spoke to Miles. And she said that Miles’ own work “tackles universal, ‘serious things’ such as identity and lineage, power and privilege. I deeply admire how Mahal’s poetry makes room for all of it – the world’s brokenness as well as its beauty – and how her fierce, fearless voice illuminates the daily struggle and miracle it is ‘just to be alive.’”

Miles didn’t get back to the Corvallis campus at all this academic year during the pandemic, when the majority of classes at OSU were taught online.

“I popped up to Corvallis once just to grab stuff out of the storage unit that I threw all my stuff into on the way down, but that’s about it,” she said, a process that she described as “painful.”

Miles enjoys spending time alone, but the pandemic pushed that to the limit – not to mention “the different sorts of chaos this world has experienced together this past year and a half.”

But there also has been an unexpected blessing.

“It’s also been a unique time for me to be back with my family, which I did not expect at this point in my life.”

Even if it meant subjecting family members to economic podcasts.

awaken, inhale
learn to tread lightly across sinking sand – become ocean air to animate this carcass is to thread lungs with fragments of our universe to allow heartstrings to freely operate – running temple to fingertips
dive daily into spark of dawn, float tenderly toward setting sun

I love…I love the peripheral

I have this visceral adoration for the painfully mundane moments,
a lot of this active endearment entails people-watching, eavesdropping

stuff that never quite warrants our full selves until you intentionally
turn that tunnel vision to see, what catches at the corner of your eye?

How people clamber into cars to drive nowhere, to escape bad days, the fact that so many
of my friends mean it when they ask ‘how are you?’ and sometimes you wake up with a
good hair day

And U-pick flowers are a thing! And how people spend their leisure hours protesting or
advocating for a better world! There’s absolutely no rational incentive for humans to be
good, ever, and yet we are

every Monday, no matter how dreaded, is at least one someone’s favorite day

the thing with life is that we’re not meant to have many grandiose scenes.

This: is not Hallmark shit.
But: we get so many Hallmark moments

mankind’s most nuclear moment consisted of just a small atom

when you find a nice rhythm in the humdrum, store these harmonies, split them, save them, keep them