The Stone Award for Literary Achievement honors a major American author who has created a body of critically acclaimed literary work and has been—in the tradition of creative writing at OSU—a dedicated mentor to succeeding generations of young writers.

OSU alum Patrick F. Stone ('74) and his wife, Vicki, established the prize to spotlight what they see as one of OSU’s best kept secrets: the MFA Program in Creative Writing, which has a growing reputation for its emphasis on mentoring students, building community and reaching out to underserved populations—including at-risk youth and military veterans. The Stones’ $600,000 commitment has allowed OSU to award prizes in 2012, 2014, 2016 and 2019, and will continue to provide award funding through an endowment. The honorarium for the award is $20,000, making the Stone Prize one of the most substantial awards for literary achievement offered by any university in the country. 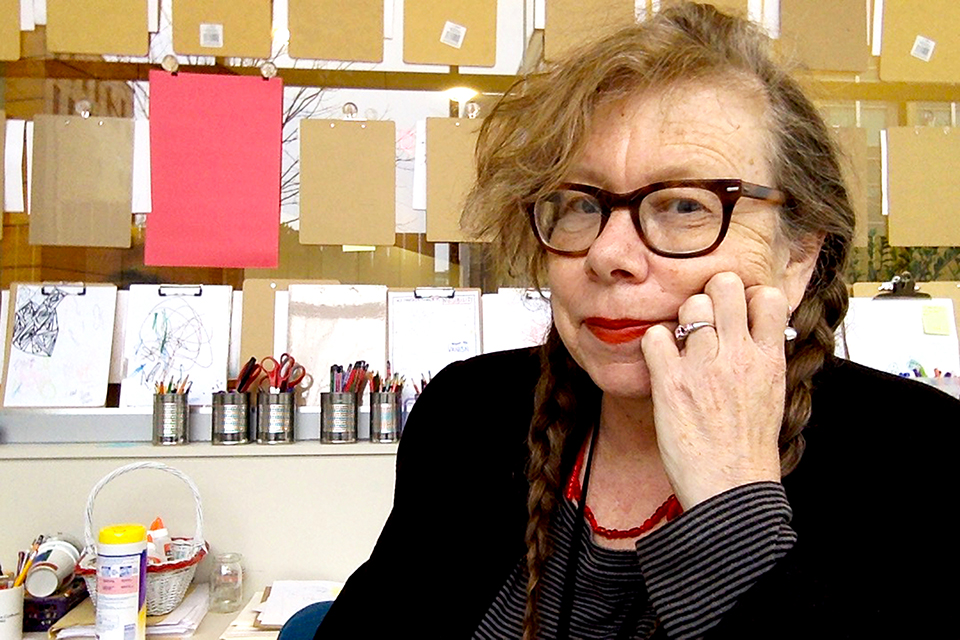 Lynda Barry has worked as a painter, cartoonist, writer, illustrator, playwright, editor, commentator and teacher and found they are very much alike. The New York Times has described Barry as “among this country’s greatest conjoiners of words and images, known for plumbing all kinds of touchy subjects in cartoons, comic strips and novels, both graphic and illustrated.” She earned a degree from The Evergreen State College during its early experimental period (1974-78), studying with painter and writing teacher Marilyn Frasca. Frasca’s questions about the nature of images and the role they play in day-to-day living have guided Barry’s work ever since.

In 1979 while pursuing a career as a painter, Barry began drawing a weekly comic strip incorporating stories considered to be incompatible with comics at the time. Stories, as Barry puts it, “that had a lot of trouble in them.” Widely credited with expanding the literary, thematic and emotional range of American comics, Barry’s seminal comic strip, Ernie Pook’s Comeek, ran in alternative newspapers across North America for thirty years.

Barry has authored 21 books, worked as a commentator for NPR, and had a regular monthly feature in Esquire, Mother Jones Magazine, Mademoiselle, and Salon. She created an album-length spoken word collection of stories called The Lynda Barry Experience, and was a frequent guest on the Late Show with David Letterman.  She adapted her first novel, The Good Times are Killing Me, into a long running off-Broadway play, since published by Samuel French and performed throughout North America.  Her book One! Hundred! Demons! was chosen as the Freshman all-read title  at Stanford University.  Her novel Cruddy was called “a work of terrible beauty” by the New York Times, and has been translated into French, Italian, German, Catalan and Hebrew. Her new book which is about the creative process with a how-to for comics titled Making Comics (Drawn & Quarterly, September 10, 2019).

All events are free and open to the public

For accommodations relating to a disability or to request this information in a different format, please contact 541-737-2623.

Past Recipients of the Stone Award for Lifetime Literary Achievement: