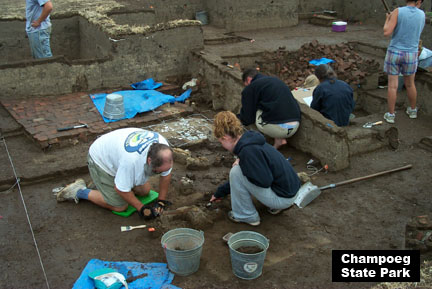 Each year we offer an Archaeological Field School with Dr. Loren Davis as well as an ethnographic field school directed by Dr. Sarah Cunningham.

Coopers Ferry Site - Dr. Loren Davis
The Cooper's Ferry Archaeology Field School, led by Dr. Loren Davis, will be returning to resume excavations at the Cooper's Ferry site. The Cooper's Ferry site is located in the beautiful lower Salmon River canyon of western Idaho and contains some of the earliest evidence of humans in the Pacific Northwest. Previous excavations show that the Cooper's Ferry site contains a long record of repeated human occupation, beginning with a Western Stemmed Tradition assemblage associated with radiocarbon dates of 11,370 and 11,410 14C years BP. These dates are controversial and, if true, support arguments that peoples bearing the Clovis tradition were not the first to settle the Far West. Our upcoming work at the site will build upon the exciting information collected already and will seek to address many archaeological questions related to the evolution of technology, economic patterns, and environmental conditions during the late Pleistocene to early Holocene period (ca. 13,000-13,000 cal BP). Ultimately, the OSU excavations at Cooper's Ferry will hopefully contribute critical data to answer many questions about the first peoples of the Pacific Northwest and, by extension, the Americas. Join us this coming summer to learn professional archaeological excavation, recordation, and field curation skills as we seek clues about the first peoples of Far Western North America. Students will also get an introduction to landscape and site-level approaches to geoarchaeological study--perspectives that are important in the search for and study of the First Americans. Apply here.

On a bi-annual basis, the Ethnographic Field School is offered to both undergraduate and graduate students. Over the course of two full weeks, the students learn about and put into practice ethnographic methods.  Housed with local families, students will get to know a community culture that is not their own.  As they practice the participant observation and interviewing skills they learn about, each student chooses and pursues a topic relevant to rural people and places.