What is a Frame Story? || Definition & Examples

"What is a Frame Story?": A Literary Guide for English Students and Teachers

As its name suggests, a frame story is a narrative that frames or surrounds another story or set of stories. It usually appears at the beginning and end of that larger story and provides important context and key information for how to read it.

Here’s a simple example: Let’s say you wake up one morning and reach for your phone to check Facebook. As you scroll through the feed, you notice a news story that your uncle has posted. “Read this, sheeple!” he has written in all caps.

You usually roll your eyes at your uncle’s weird reposts, but you have some time to kill, so you click on the story and discover what appears to be a scientific article entitled “The Hidden Dangers of Apple Juice” published by a site called “ParedDownNews.” According to the article, apple juice not only causes cancer; it also probably contains rabies passed on by fruit bats.  If  you want all the taste of apple juice without all the rabies side effects, the article concludes, you should start drinking pear juice.

This conclusion seems more than a bit suspicious, so you do some quick Googling and find out that ParedDownNews is financed by something called Freedom Pears of America—a marketing team for pear juice manufacturers that your uncle, coincidentally, works for. This revelation makes you rethink what you have just read, and you decide to do a bit more research before you give up on apple juice for good.

This story isn’t, of course, real [don’t @ me, pear mafia!], but it does illustrate the ways in which paying attention the frame surrounding a story can help us to rethink the content of the story. In this fictional scenario, the story of the toxic apple juice seems designed to motivate its audience to buy more pear juice, and we read it in a very different way with this knowledge in mind. 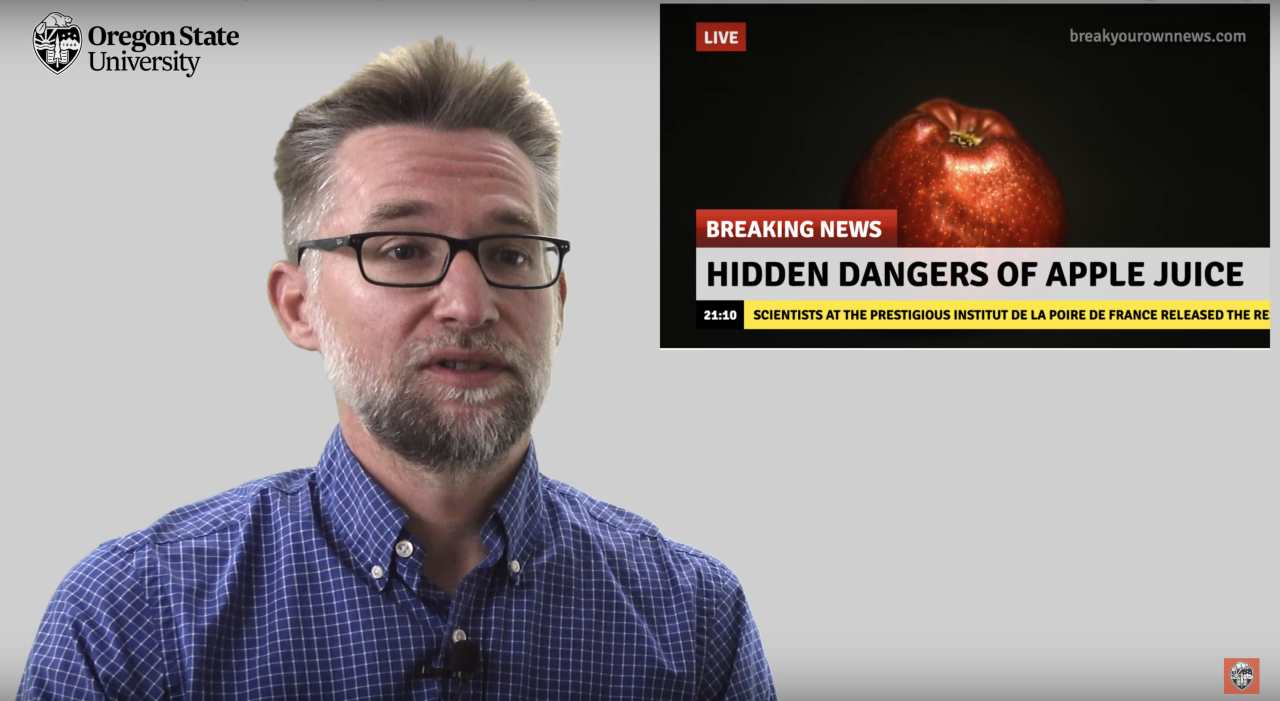 Like your uncle’s Facebook post, most of the time, the stories that we encounter are frameless or minimally framed, and we therefore have to do some research to reestablish the context out of which they are produced. But every so often we read stories that build a frame narrative into the story itself.  Instead of jumping right into the tale to be told, these narratives pause for a moment to reveal the person who tells the tale, the people who listen to the it, and the occasion for telling it.

You have probably read a novel or watched a movie that begins in this way. Maybe you’ve read the collection One Thousand and One Nights and learned in the frame story that the storyteller, Scheherazade, has just married a king, Shahryār. You would also have learned that after his first wife betrays him, Shahryār’s jealousy and rage lead him to kill his wives the morning after their wedding night. To avoid this fate, Scheherazade must tell him a new story every night, and that story must be so interesting that he cannot help but spare her life for another day.

Or maybe you’ve watched the movie The Princess Bride. That movie, as you may recall, begins with a curmudgeonly grandfather trying to convince his sick grandson to give up his tv and video games to listen to a story that is also called The Princess Bride.  As he tells his grandson, he used to read the same story to the boy’s father when he was young. “It doesn’t sound too bad,” the grandson tells him.  “I’ll try and stay awake.” 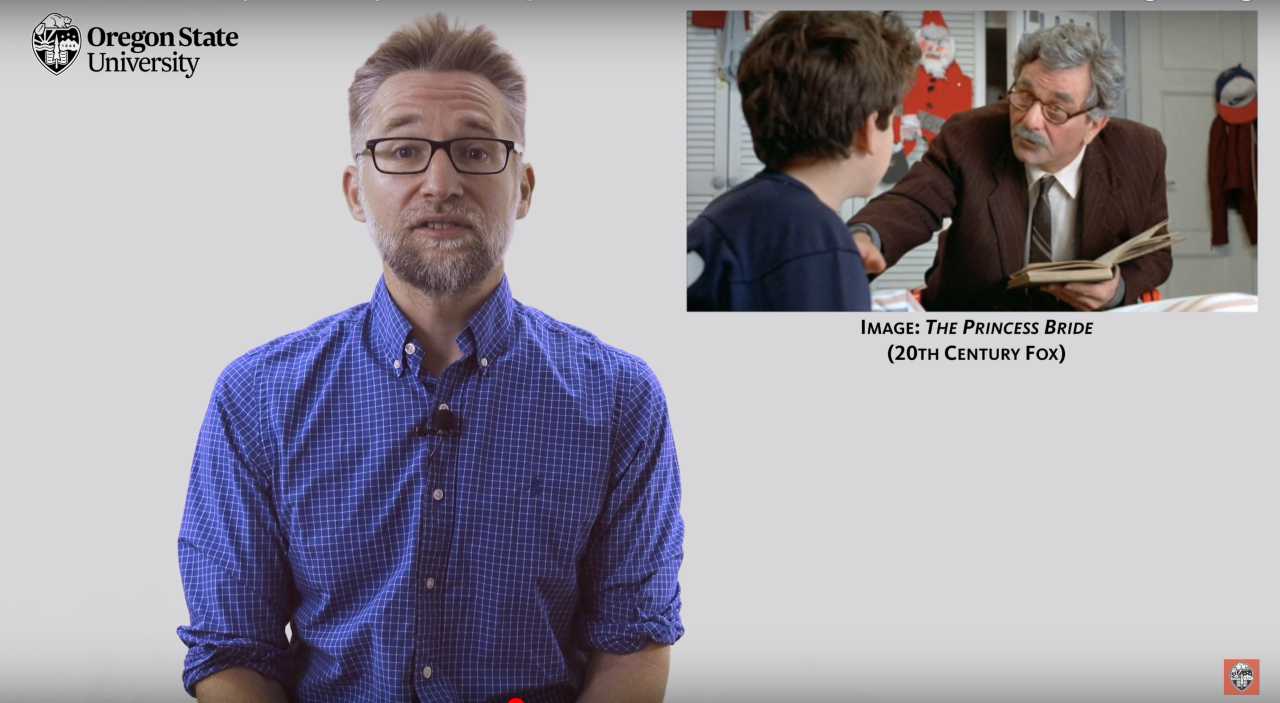 These stories are obviously very different from one another—the grandson won’t execute his grandfather if the story bores him!—but they are both subject to a simple set of questions that you can (and should always) ask when reading frame narratives: Why is the story being told? What appeals does the story make to its implied audience of listeners? And how do the main story’s themes relate to the themes of the frame story?

Sometimes answer to the first question are fairly obvious. Scheherazade, for example, tells her 1001 tales to keep her husband’s interest and to prevent him from executing her every morning of her marriage. But other times, determining the narrator's motivations and the relationship between the frame story and the main story require a bit of thought.

Consider the grandfather in Princess Bride.  He wants to show his love for the grandson and to have that love reciprocated. With this in mind, we might understand certain aspects of the story he tells him—say, Inigo Montoya’s love for his murdered father—as an attempt to foster a similar kind of intergenerational love. When Inigo tells the six-fingered man “My name is Inigo Montoya. You killed my father. Prepare to die,” the narrator is also telling his grandson “My name is your grandfather. I read to your father. Prepare to love me.” 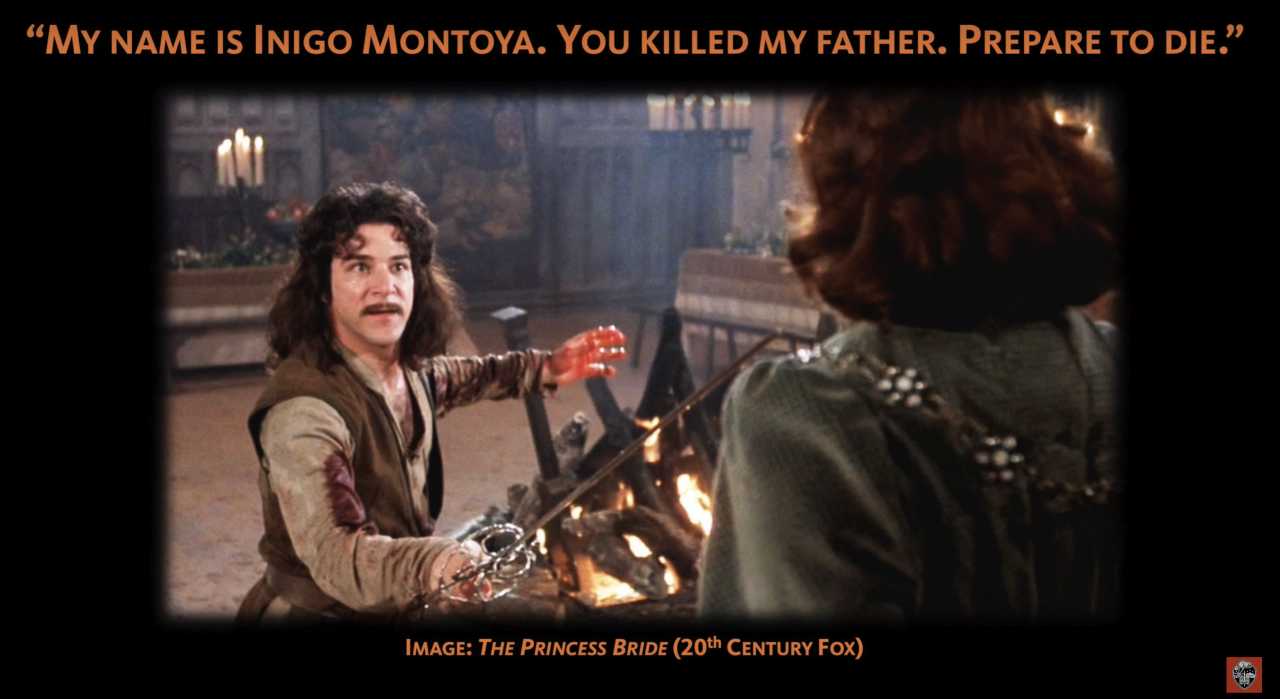 As these examples make clear, when we answer the first question—“why is the story being told?”—our interpretations begin to open up, and we can ask more questions about the stories that the frame contains, starting with the second question, “What appeals does the story make to its implied audience?” In the case of One Thousand and One Nights, for example, we could ask how Scheherazade’s selection of stories are meant to entertain her husband and what lessons she hopes they will convey to him.

Scheherazade’s husband is clearly a fairly restless and agitated man—certainly not someone you would want to marry—which makes it all the more appealing to her audience that her stories are full of restless heroes like Sinbad the Sailor. At the start of his second voyage, for example, Sinbad tells his listener, a poor porter who is also named Sinbad, something that might also appeal to Shahryār: “I had resolved, as you know, on my return from my first voyage, to spend the rest of my days quietly in Bagdad [sic], but very soon I grew tired of such an idle life and longed once more to find myself upon the sea.” 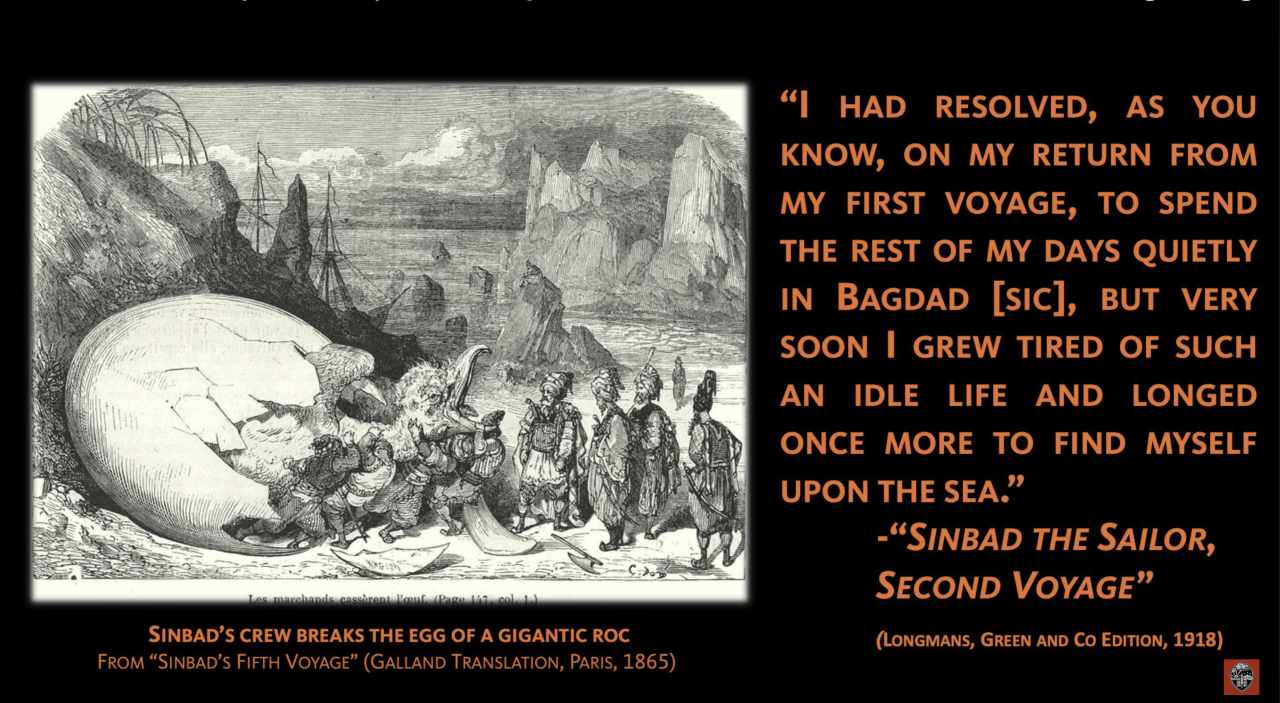 He echoes this sentiment at the start of all seven of his voyages abroad, and this quest for novelty establishes a thematic relationship between the frame story and Sinbad’s adventures. Clearly, Scheherazade needs her character, Sinbad, to be restless so she can keep telling her stories. She doesn’t want to run out of material and be killed! But at the same time, she probably does not want her husband to fully identify with Sinbad’s wandering ways. After all, he might then kill her and set off on another marriage ‘voyage.’

Scheherazade resolves these problems at the end of Sinbad’s seventh adventure, when she has the restless adventurer finally agrees to settle down for good with his friend and family. In his final lines, he asks the porter "Well, my friend, and what do you think now? Have you ever heard of anyone who has suffered more, or had more narrow escapes than I have? Is it not just that I should now enjoy a life of ease and tranquility?" With the frame story in mind, we might recognize that these questions are equally appropriate for Scheherazade. She has, after all, also narrowly escaped death every night of her married life and should now, at long last, enjoy a life of ease and tranquility. 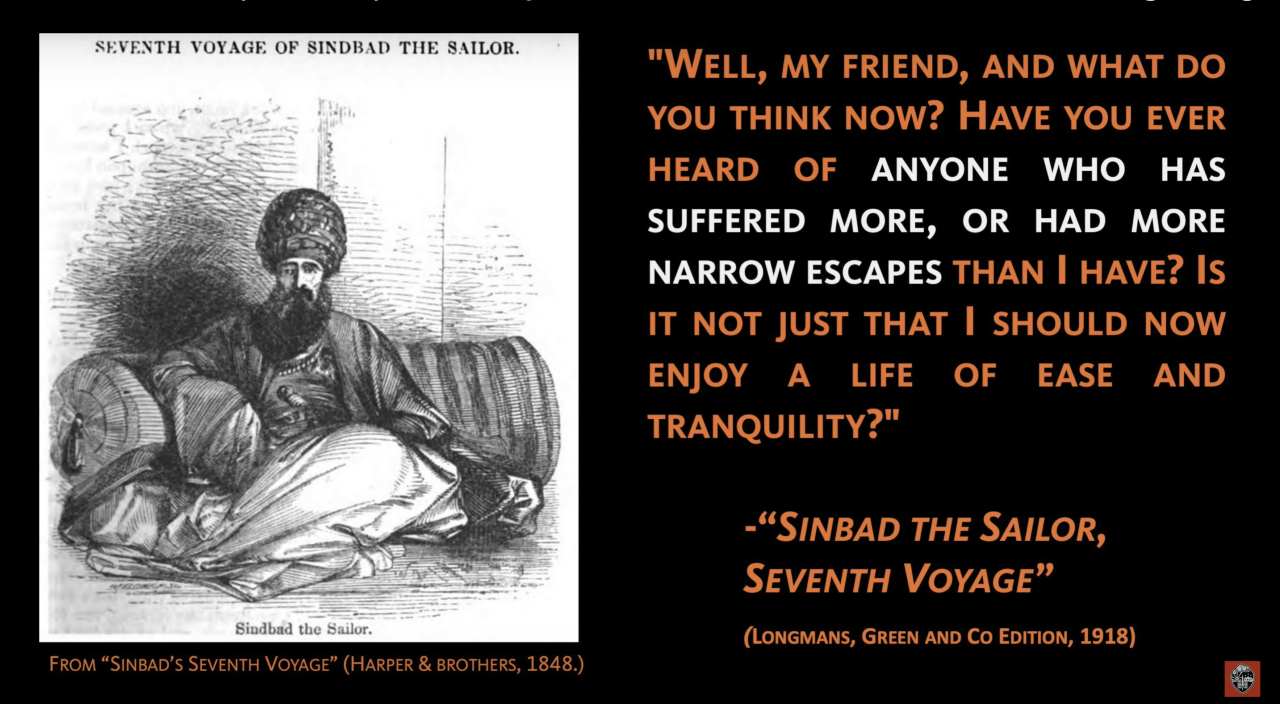 The readings I have just given for One Thousand and One Nights and The Princess Bride were both generated from the same three questions: Why is the story being told? What appeals does the story make to its implied audience? And how do the main story’s themes relate to the themes of the frame story?  If you keep these three questions in mind, you’ll have a good sense of how to start reading any other frame stories you encounter in your literary adventures. And who knows? You may even have a better sense of how to read your uncle’s Facebook posts. Happy reading, everybody.

Chaucer's Canterbury Tales offers numerous example of frame tales shedding light on main tales and vice versa. "The Miller's Tale," for example, is told by a drunken lout, which may have some impact on the rather bawdy nature of that tale and how the next storyteller, the Reeve, responds to it in his own story.

Writing Prompt: Why does the Miller tell his tale? What appeals does the Miller make (or not make) to his implied audience? How do the Miller's Tale’s themes relate to the themes of the frame story? Finally, how does the next storyteller, the Reeve, respond to the Miller in his own tale?