What is Gender-Neutral Language? || Oregon State Guide to Grammar

"What Is Gender-Neutral Language?": Oregon State Guide to Grammar

What is Gender-Neutral Language? - Transcript 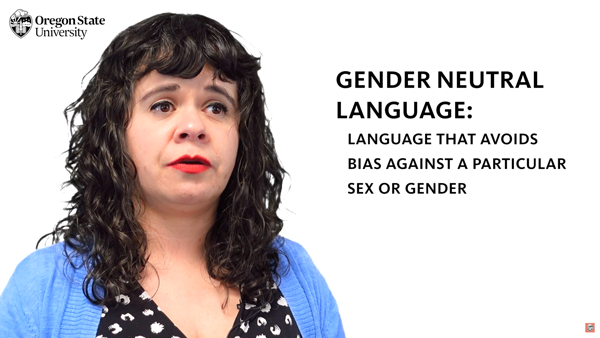 Why use gender-neutral language? Well, language matters. I bet you could think about some words that you cannot say in certain company. You can also, I imagine, think of words that have been used to offend, to discriminate against, and to oppress. What we say and how we say it matters. Your words have the power to include a diverse audience or set the boundaries of the conversation by leaving some people out. Using gender-neutral language demonstrates your commitment to inclusion. And gender-neutral language better represents how people identify today. A 2018 pew research report showed that 25% of millennials and 35% of Gen Zers knew someone who uses gender-neutral pronouns, such as “they.”

Let’s start with nouns. Most English nouns do not have grammatical gender forms, for example teacher or president. Words ending in man are the most commonly used gendered nouns in English. These words are easy to spot and replace with more neutral language. For example, instead of the gendered noun “mankind,” you can use the words “people” or “humanity” or “human beings.” Instead of the gendered “freshman,” you can also use the words “first-year student.” Some nouns that once ended in “man,” for example “fireman,” have neutral equivalents that are used to include all genders, for example “firefighter.” 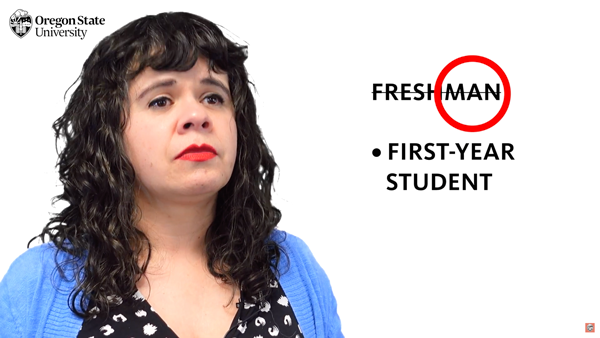 Now let’s talk about pronouns and possessive pronouns. English offers no widely accepted pronoun choice for gender-neutral third person singular nouns that refer to people. You cannot call a person “it.” The case is similar with possessives. Until somewhat recently, in the sentence, “Every student must submit his assignment by the due date,” the masculine possessive “his” would be used to refer to any student in a group that may include male, female, and gender nonbinary people. However, in today’s linguistic context, it not only makes your writing sound outdated, but it also is exclusionary of female and gender nonbinary people — that is, people whose gender identity does not conform to the gender binary.

Instead, try making nouns and pronouns plural. Here’s an example of a sentence that can easily be rephrased: “a student on Zoom can turn his camera off.” The revised sentence would be: “students on Zoom can turn their cameras off.” Another option is to use “they” as a singular pronoun, as we’ll discuss in a future video. 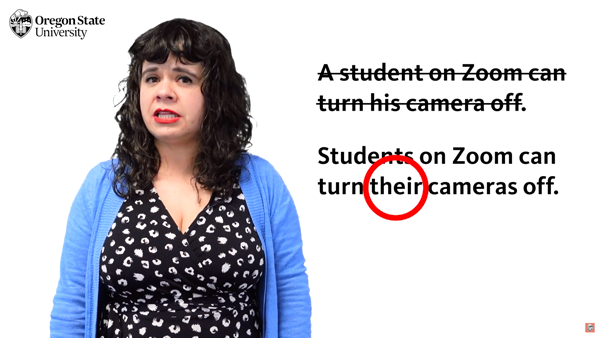 Let’s now tackle those gendered forms of address. When referring to or addressing specific individuals, use forms that are consistent with their gender identity. Look up the person online. Do any of their professional websites include gender pronoun preference? Are they listed as “Mr.,” “Ms.,” “Dr.”? If the person appears as “Ms.” on professional websites, that is the form of address that should be used and feminine pronouns are appropriate. Alternatively, if the situation permits, you may ask the person you’re addressing or writing about what pronoun and form of address they prefer. Never make any assumptions about a preferred form of address or pronoun. If you are unsure, try to always err on the side of gender neutrality.