What is the Uncanny? || Definition & Examples

"What is the Uncanny?": A Literary Guide for English Students and Teachers

What is the Uncanny? Transcript (Spanish and English Subtitles Available in Video. Click HERE for the Spanish Transcript)

What scares us? What keeps us up at night after we watch a horror movie or has us rushing to lock our doors after reading a scary novel? If we run through a catalog of stock horror characters, we might come up with an easy and obvious answer to this question: we are afraid of things and people we don’t understand.

We all can probably agree that the creatures in the Ridley Scott movie Alien are terrifying, and this is largely due to the fact that they don’t look or act like us (they pop out of our stomachs, after all!)

This tendency to view “alien” others as evil or frightening is, of course, often itself evil and frightening, as countless stories from history and literature remind us. But this depressing tendency isn’t what I want to get into today.

Instead, I want to discuss a different (and, to my mind, more interesting) kind of fear, one that is generated by things that are NOT unfamiliar to us. I’m thinking here of things that have been with us since our childhoods, like dolls, for example, or clowns, or televisions. What is it about these old familiar things that, under certain circumstances, raises the hair on the backs of our necks? 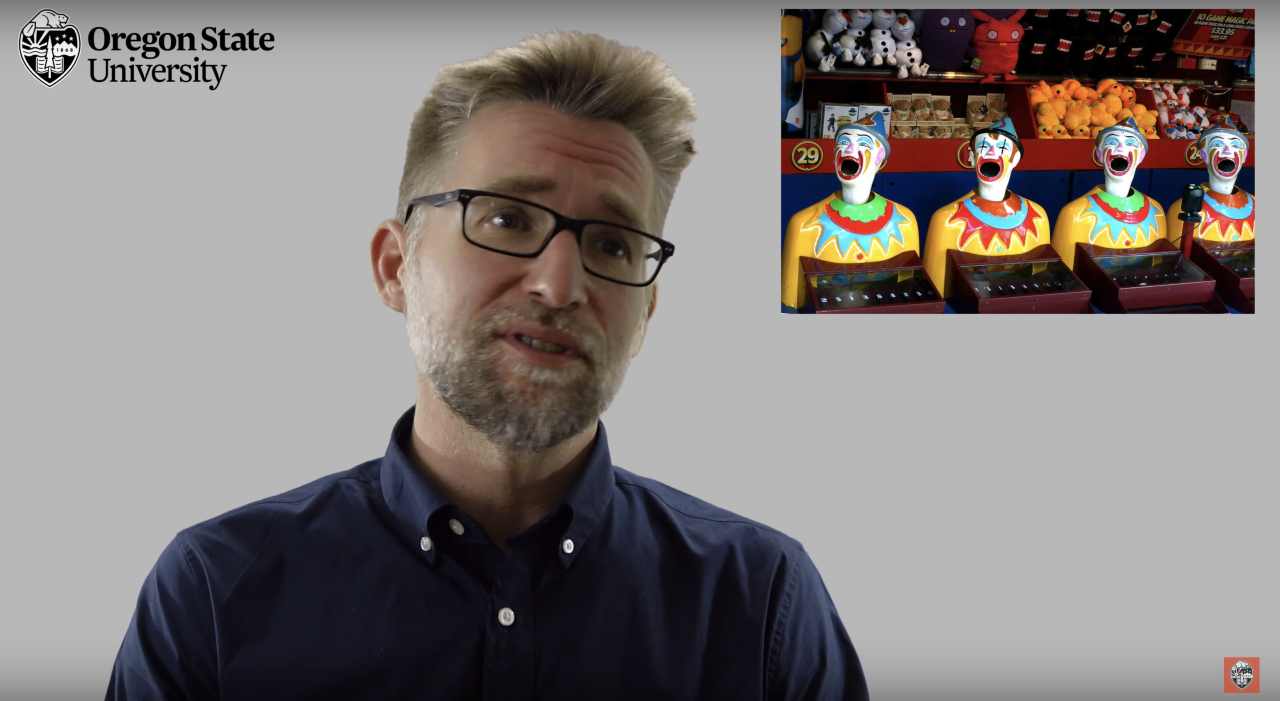 Sigmund Freud takes up this question in a 1919 essay “The Uncanny,” and his thoughts on the subject are still useful 100 years later. In this lesson, I want to sketch out his definition of this special kind of fear and then show you how you might apply it to your own readings of literature.

Freud begins his essay with a strange observation.  The word for uncanny in Freud’s native language of German is “unheimlich,” which means not from the home.  In other words, not familiar. This definition seems to repeat what I just said about alien others—we fear that which is not from the home. But Freud also notes that unheimlich (or uncanny) has, in certain situations, been used to mean something hidden inside the home that was never meant to come to light.

This is very strange, as it suggests that the meaning of unheimlich and heimlich, or uncanny and canny, overlap.  Like the word buckle, which can mean to break apart or to come together, uncanny thus means itself and its opposite at the same time.  Weird, right?

To resolve this paradox, Freud turns to his general theory of the self and asks what might be hidden within us that suddenly comes to light and frightens us.  As you may already know, Freud was absolutely obsessed with changes that take place in our minds as we move from childhood to adulthood.  When we are children, Freud suggests, we are fiercely devoted to our mothers, because they nurture and protect us. Anything or anyone who gets in the way of this devotional love becomes, in our irrational baby minds, a threat that should be eliminated—even if that threat happens to be our father.

What I’ve just described is a version of Freud’s famous Oedipus complex, in which a male child, echoing the actions of the tragic Greek king Oedipus, wants to kill his father and marry his mother.  Freud isn’t suggesting that our adult rational selves want to carry out these actions—Oedipus, after all, is so horrified by his actions that he blinds himself when he discovers what he has done.  Instead Freud is suggesting that the self we once were as a child still remains within us, hidden underneath our new rational, adult self.

And sometimes, like the alien in Scott’s movies, that hidden self pops out. As he writes, “Nowadays we no longer believe [in childish fantasies], we have surmounted such ways of thought; but we do not feel quite sure of our new set of beliefs, and the old ones still exist within us ready to seize upon any confirmation” (241).

So now we’re getting somewhere!  The uncanny seems to be related to beliefs we once held when we were children that we’ve repressed or covered over or hidden away to become adults.  We cover over these beliefs because, of course, those beliefs are wrong and we don’t want to be wrong.  We want to be grown up.  We want to be rational people with proper attitudes about the world. (Clowns aren’t scary, Ray, stop behaving like a child!)

And this process of maturation, of giving up our childish things, takes a lot of time and effort on our part.  It would be absolutely horrifying to imagine, as adults, that our child-self had a better understanding of the world than we do. This, for Freud, is the uncanny—it is the dread we feel in situations in which our childish fantasies and fears appear more real and more true than our adult worldviews.

If we have this idea in mind, the difference between familiar things that delight us and familiar things that terrify us start to make sense.  In the movie Toy Story, the talking dolls on screen are funny and sympathetic characters because they are written within a genre that makes it ok for them to come to life.  I don’t go to a Pixar movie and expect reality. In the realist setting of horror, however, those same dolls become terrifying to adult audiences. 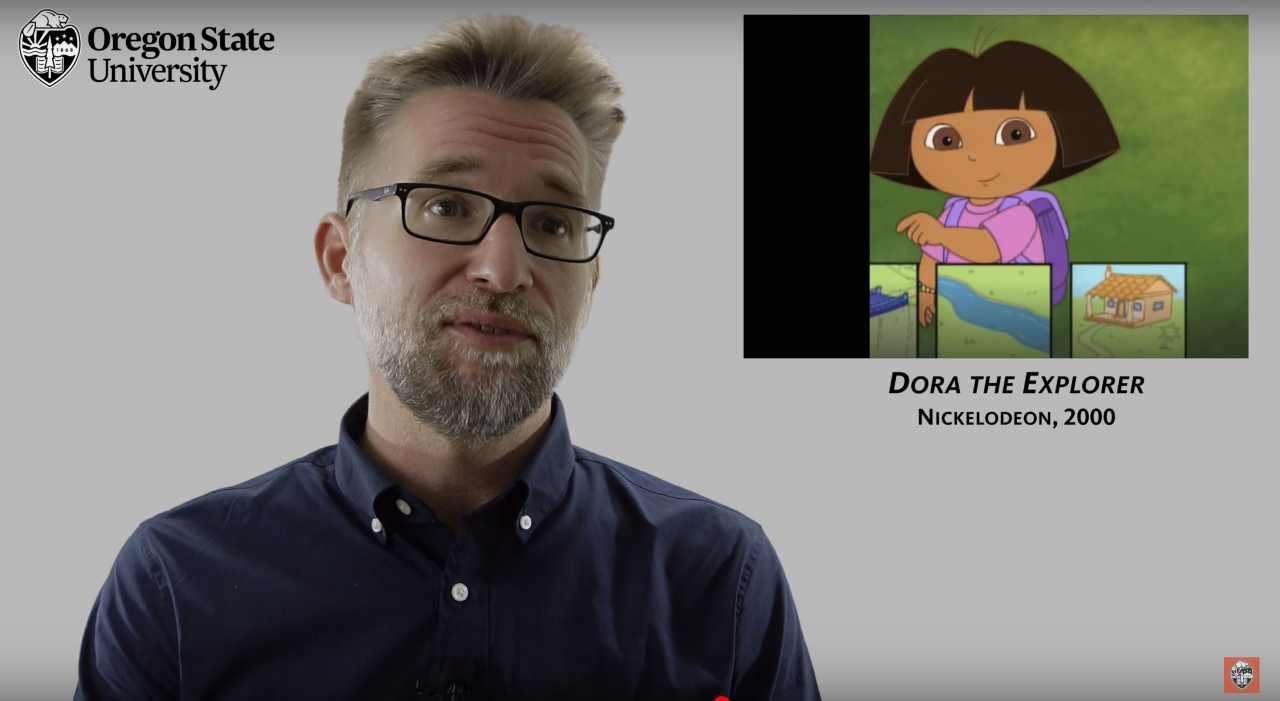 Along similar lines, if I were a child, I might imagine, say, Dora the Explorer as someone who is actually inside of my tv asking me for advice on her travels.  As an adult, well, that would also be pure terror (right? You—right there, yes, I’m talking to you!) 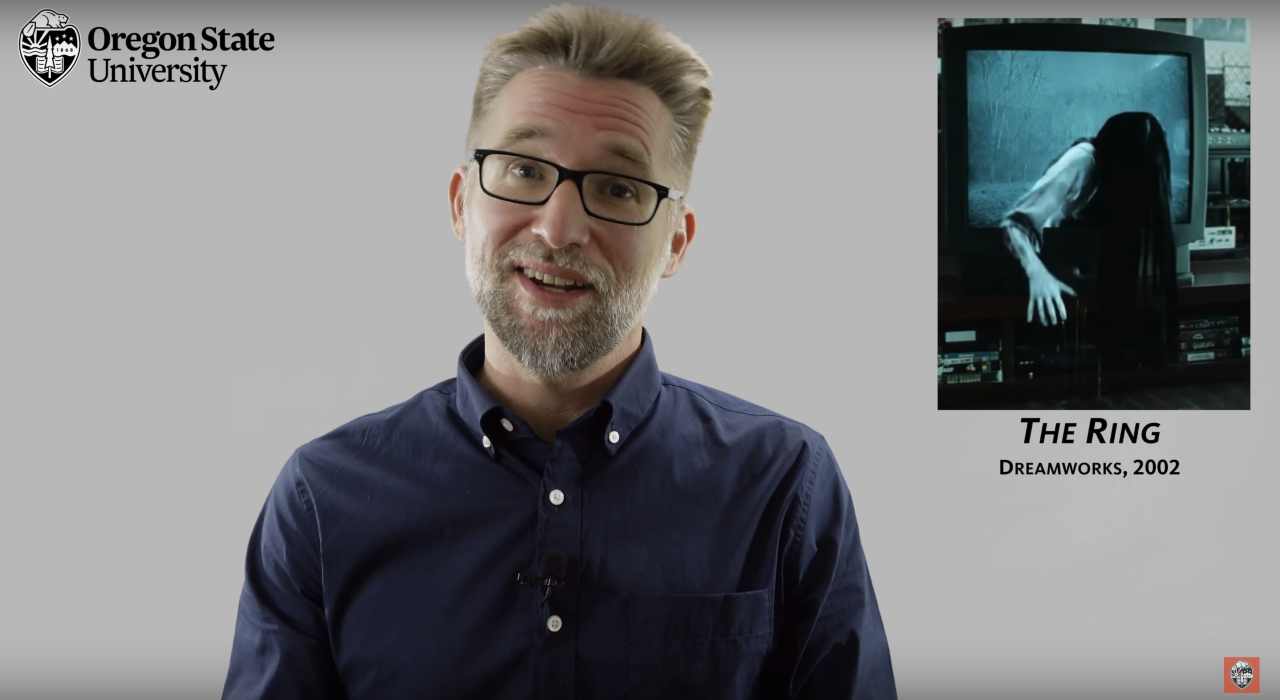 Both of these examples suggest one final necessary property of the uncanny—realism.  Fairy tales and children’s cartoons cannot be uncanny, because those genres never ask us to believe that what we are watching relates in any way to our reality.  “The situation is altered,” Freud writes, “as soon as the writer pretends to move in the world of common reality… He takes advantage, as it were, of our supposedly surmounted [or overcome] superstitious-ness; he deceives us into thinking that he is giving us the sober truth, and then after all oversteps the bounds of possibility.”

Freud’s phrasing might sound confusing, so let’s clear it up with a simple example.  Here’s one from the opening to Edgar Allan Poe’s famous poem, “The Raven.”

Once upon a midnight dreary, while I pondered, weak and weary,

Over many a quaint and curious volume of forgotten lore,

While I nodded, nearly napping, suddenly there came a tapping,

As of some one gently rapping, rapping at my chamber door.

”’Tis some visitor,” I muttered, “tapping at my chamber door—

Only this, and nothing more.”

It is, of course, terrifying to hear an unexpected knock at your door at midnight. It would be even more terrifying and uncanny if your significant other, Lenore, had just died and you were saddled with immense grief, as we later discover is the case with Poe’s speaker. The knocking might remind you of strange noises you heard at night when you were a child that you thought were ghosts or demons.  Or it might encourage you to imagine that Lenore could return from the dead, even though your rational self knows that is impossible.

The speaker considers both uncanny scenarios after a mysterious talking raven appears, which leads the speaker to descend into madness. But before any of this happens, (and before the uncanny can therefore operate), Poe’s poem must “pretend to move in the world of common reality.” Poe does this by having his speaker insist that there is a rational explanation for the tapping. It is a visitor, he mutters to himself, “Only this, and nothing more.” In other words, Poe and his speaker here are insisting that he (and the readers along for the ride) have no cause for concern—there is a perfectly rational explanation for the strange noise at his door.

Even after the raven appears and starts squawking “Nevermore,” the speaker still maintains his faith in his rationality:

“Doubtless,” said I, “what it utters is its only stock and store

Caught from some unhappy master whom unmerciful Disaster

Till the dirges of his Hopes that melancholy burden bore

I won’t go any further into an interpretation of this poem, other than to say that Freud’s model works quite well within it.  If you have any thoughts on how the analysis could proceed, I hope you’ll share them in the comments section in the video.  You could also, incidentally, consider how the uncanny might work in the first example I mentioned at the start of this video—the Alien movie—in which what appears on the surface to be wholly unfamiliar phenomena—aliens bursting out of bodies, for example—might actually, with a bit of thought, be understood as events our child selves were quite familiar with. And our mothers, too.

Freudian readings of literature are obviously old and problematic in a variety of ways, and they need to be reworked for the 21st century. But as his theory of the uncanny itself suggests, leaving Freud’s ideas behind or covering them over carries its own risks, too. Reading his theory and making it relevant for our very different times can help us to gain a better insight into what we fear and, more importantly, what that fear can tell us about who we are.

The uncanny can contribute to a variety of discussions of popular gothic short stories, including Poe's "Ligeia" and "Fall of the House of Usher" and Henry James's novella The Turn of the Screw.